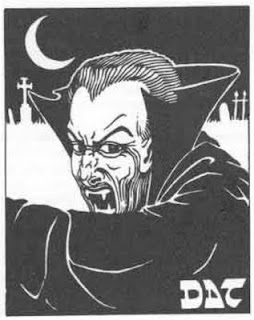 As I revealed in a previous post, vampires have always scared me a great deal, and I think of them as extremely powerful, evil, and cunning foes.  So in the Lands of Ara, with very few exceptions, vampires are the most powerful and dreaded evil creatures to be found in the region.

Arandish vampires are in fact ancient necromantic magic-users and/or chaotic clerics who participated in the centuries-past Old War between Achelon and Telengard.  At the end of the Old War, these necromancers were imprisoned in the Spire of Mornlyn by Arlon the Wise and Sarkon of Telengard.  Unfortunately, the imprisoned wizards figured out how to preserve themselves forever as evil undead beings, and subsequently escaped imprisonment in Mornlyn to roam Ara by night as vampires, seeking dire vengeance upon humankind.

Thus Arandish vampires are really more akin to liches from AD&D (see Monster Manual p. 61): ancient, incredibly powerful evil sorcerers turned undead by force of their own will.  In terms of game statistics, I treat an Arandish vampire like a hybrid of a D&D vampire and a D&D lich.

Arandish vampires are at least 18th Level magic-users and/or clerics (often both).

Arandish vampires cause fear in all beings of 5th Level (or 5 HD) and lower.

I may use the standard D&D vampire (see Labyrinth Lord pp. 101) for select purposes, like when characters and other beings get bitten and turned vampiric – a kind of lesser vampire type always enslaved to a Vampire master.  But those will be relatively rare, as Arandish vampires are particularly megalomaniacal and do not tend to create much vampire spawn with whom they must share feeding grounds – they prefer lesser, non-vampiric undead minions and servants.