A Two-Part Revelation About Bards 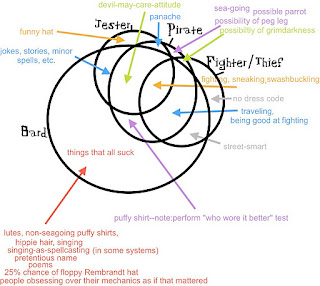 (Note especially the comment in the far bottom left:
"people obsessing over their mechanics as if that mattered")
With all due respect to Uncle Junkal, who I very much enjoy having in my campaign, I admit to feeling this way myself sometimes.  My annoyance has less to do with objection to the Bard character type as such, but to the immense difficulties inherent in making the Bard class work within the rules without feeling patently stupid or wonky at times.

Should Bardery simply be role-played?