As I mentioned the other day, I am starting a new local Labyrinth Lord campaign here in my home village of Brockport.  I hereby dub this enterprise, to be commenced today (six hours hence), The Brockport Campaign.  This campaign's name refers to the physical locale of the game sessions in the "real" world, as well as the in-game port city from which the PCs hail.  Those PCs have ventured many months' travel west of the prosperous sea port, to find themselves lost in a vast desert. . . . 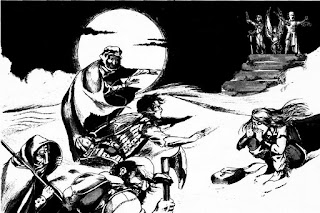 One ancillary benefit of naming the new game the Brockport Campaign is that the names of my three active campaigns follow an easy-to-memorize A - B - C pattern:

C = ConstantCon, Tales From The Hotel Kaladarian (plays in HELL)

At any rate, here are the House Rules I plan* to use for the Brockport Campaign:

Our campaign shall obey the Labyrinth Lord Core Rules plus:

Shields Shall Be Splintered!
Shields provide the usual +1 bonus to AC. However, they may also be used to "soak" damage from a single attack, thereby reducing damage to zero. Soaking damage destroys the shield.

Shields may also be used against any attack that allows a save for half damage, such as a fireball or dragon's breath. In that case, the shield is destroyed, as above, and the save is considered automatically successful, thereby guaranteeing half damage.

For magical shields, each +1 enchantment bonus gives a 10% chance of surviving a damage soak.

Multiple-Turn Searching for Secret Doors Allowed
This deviates from the "one try only" rule as printed in LL p. 45.

Critical Hits and Fumbles
Any time a player rolls a natural ‘20’ on a to hit roll, it is a critical hit. Damage is doubled.

Likewise, if a player rolls a natural ‘1’ on a to hit roll, it is considered a critical failure or fumble. Typically, this means the combatant hurts himself, drops his weapon, breaks his weapon, or just plain falls down – Labyrinth Lord's discretion.


--
* Note: I anticipate having some veteran players onboard -- I know at least two of my probable attendees have played D&D 3.5 and/or D&D IV at any rate -- so plan to spend a wee bit of time at the top of the first session discussing these house rules and making sure nobody has any strong objections or intriguing suggestions.  For myself, I am really hoping to stick to Race-As-Class and 3d6 in order, for part of my mission here is to introduce these folks to the mechanics and feel of old-school play.  I want the whole thing to be as Moldvay-ish as possible.  So I will resist adding AEC classes as best I can; but I do not want to ruin anybody else's good time either, so we'll see what happens.  I am easily negotiated with.