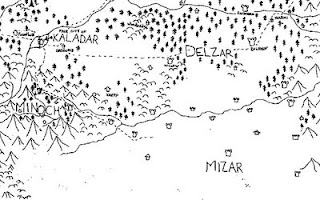 When Crimson Blades of Ara was first created and Dave Miller and I sketched out the first Arandish map circa 1989, the region south of Delzar and the Free City of Kaladar was left blank except for the words "Barbarian Nomads."  A bit later, we dubbed the region Mizar [MY-zar] and decreed that it was a vast plain shared by, well, barbarian nomads and deadly hordes of trolls to the south.  It was not until 1994 or '95 that Scott Peoples really brought Mizar and its people to life, first by playing our first-ever Mizarian [my-ZAR-ee-yun] player character, Raptor, then by integrating a few of the Mizarian clans and some Mizar-Delzar border skirmishes into one of his own CBoA campaigns.  Scott described the Mizarians as "Klingons on horseback," and indeed, their warlike nature and deep sense of honor has remained their hallmark ever since Scott's interpretation took hold.

In a previous post I stated that "Mizarian characters are almost always fighters, and are always proficient horsemen."  I would now like to refine the first part of that statement by saying that the vast majority of Mizarians are either fighters (20%), rangers (30%), or barbarians (50%).  For the latter I use the Ode to Black Dougal Barbarian class, which is now an available PC class in the Lands of Ara!  As for Mizarians being proficient horsemen, that is indeed true: all Mizarians (regardless of class) receive a +1 bonus to any rolls having to do with riding or handling horses.

The Mizarians have few to no bona fide wizards, though every tribe has one or more shamans or clerics loyal to Threk, Warrior God of the Plains.  While each Mizarian tribe has its own gods and heroes, all Mizarians revere Threk above all other deities, though some Mizarians who venture north into other Lands of Ara learn to respect (and sometimes even worship) Frey, the Noffellian War-God, who shares many superficial characteristics with Threk.