My Email Invite to New Players 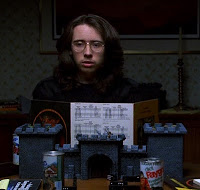 A few days ago, I sent my first introductory email message to a group of eight potential players for the Arandish Labyrinth Lord Campaign 2010!  A few of these folks are veteran gamers, or people who have played RPGs in the distant past and are interested in playing again.  But I do have at least two invitees who have never played an RPG before, so I sent an email with a fair amount of explanatory language that helped reassure folks that rules-memorization and a hefty time commitment would NOT be required.  Here is the text of the email:

I email to officially invite you to participate in a thrilling tabletop (pencil and paper) role-playing game (RPG) experience starting this coming January 2010! I will be staging an original, ongoing adventure campaign using the LABYRINTH LORD rules set, which I will briefly explain before moving into the particulars about times, dates, etc.

Without boring you with lots of background about the RPG’ing hobby, suffice to say that there is an “old-school revolution” taking place within it right now, and I am part of this renaissance. Those of us who favor the old-school approach to RPG’ing prefer the way the relatively simple role-playing games of the 1970’s and 1980’s – such as the first two published editions of DUNGEONS & DRAGONS – functioned and played, and as a result we have no truck with the newer, rules-heavy systems that have been published since the 1990s. Many of us particularly have it out for the latest (Fourth) edition of D&D, which in many ways has been designed to cater to the “World of Warcraft” and online gaming crowd: its combat rules in particular simulate the WOW online gaming experience.

Thus, many of us who prefer our RPG-ing to feel more like it did in the 1980s have turned to various “retro-clone” systems, newly published games that intentionally emulate earlier (and long out-of-print) editions of D&D. At the recommendation of my good friend Carl Nash, I have chosen LABYRINTH LORD by Goblinoid Games as the particular old-school rules emulator we will use for our upcoming game campaign.

Note: For those who know or care about gaming history, LABYRINTH LORD specifically emulates the D&D Basic and Expert Rules sets (B/X) written by Moldvay & Cook and published in 1981 – see the full TSR D&D product chronology at this link:
http://grognardia.blogspot.com/2009/09/d-product-chronology.html

In LABYRINTH LORD, there are very few rules governing what happens in play, except for certain basic dungeoneering actions (such as finding secret doors, detecting traps, etc.), combat (fighting monsters), and magic use (casting spells). Almost everything else that happens in the game is invented by the players and referee and adjudicated by the referee and the roll of the dice. For example, if your character wants to sneak up on a guard and knock him out cold with a wine bottle, there are no concrete rules nor character skills for that – the referee (me) will simply assign a probability for success based upon how you as a player describe your actions to me, then have you roll a die to determine the success (or failure) of your proposed action. Rules adjudications are made on the fly by the referee and dice rolling, which means all that you players have to do is be inventive! Any action you can dream up for your character to perform can be attempted, and there is no need to consult long lists of rules or skills because THEY DO NOT EXIST.

In fact, you do not need to know the LABYRINTH LORD rules at all in order to be a player in this game; knowing the rules is actually my job as the referee. As a player you can simply show up, allow me to assist you in the (VERY SIMPLE) task of generating a character, and then START PLAYING literally ten or fifteen minutes later. There are about six die rolls and three other decisions to make in order to generate a character, AND THAT’S IT. There is NO DISADVANTAGE in this game to NOT knowing the rules, because the rules actually cover very little of what can happen / actually does happen in game play. It is much more about role-playing and imagination than rules familiarity.

So in concrete terms, here is what I propose: that our gaming group meet once per week, on a weeknight, for approximately four hours per session. I was thinking Monday nights from 7-11pm. Players are free to jump in or out of the campaign as you please; if you cannot make (or do not wish to attend) a given session during a given week, no big deal – I am highly adept at slipping characters in and out of adventures. We should have enough players -- I am inviting nine of you in all, knowing that some of you will be sporadic participants or may say “no” outright – to maintain fairly consistent attendance within my ideal group size parameters: 3-7 players in addition to myself.

No RSVP is necessary unless (A) you know right now that you absolutely do NOT wish to participate in the game at all, or (B) you want to play but know that Monday evenings will absolutely not work for you next term. But if the scheme I have proposed more or less works for you, and if you think there is even a remote chance that you will drop in for a session and try this out, then no response to this email is needed. I will get back in touch with all of you in early January to set the exact date for the first session. (Note: you gung-ho types are welcome to start devising, rolling, and creating characters. But I will include a brief [20-minute] character creation period into the beginning of our first session in January as well.)

I concluded the email by providing links to the downloadable Labyrinth Lord core rules pdf as well as my own blog.

I think the tone of my email worked because one of my good friends and academic colleagues who has never RPG'd before told me last night that she is IN!  This is a major triumph because she is one of those folks who really gets into the spirit of whatever game she plays -- I have introduced her to Games Workshop's TALISMAN board game before -- and uses her acting skills (she is a former theater actor) to her advantage.  Just the kind of player I like, and my senses tell me she will get a really big kick out of playing Labyrinth Lord -- I know I am thrilled to have her onboard.

At this point, then, I have five confirmed players: the role-playing newbie I just mentioned, two friends who do not roleplay currently but have in the distant past, plus two folks from Carl's Mutant Future group -- Carl himself plus one other.

My biggest problem now (and what a sweet problem to have!) is limiting how many players I end up with in this thing.  For while I admire Mutant Lord Carl's ability to referee really large (10+) groups of players, I am not so sure about my own abilities / proclivities in that area.  I am actually envisioning the ideal party size for this campaign as being anywhere between 3 and 8 players -- for my own sanity I do not really want to hit double-digits.  But this means being a wee bit selective about who I ask to play, since so far even some of my "long shots" have been saying yes!  There is one other player in the Mutant Future group who leaps out as a particularly good player and who I have been wanting to ask, but I do not yet have email contact info for him and I have felt leery about verbally asking him to play in front of the whole MF group.  It may be that my strategy will continue to entail NOT plugging the LL campaign amongst the Mutant Future-ites generally, but simply letting interested parties know that if some of my other players flake out / drop out of the campaign down the line, I would certainly ask them in as replacement players.  This is tough because I hate to exclude anybody, especially given the MF group members' proven enthusiasm and creativity, but I think that's the safest route for now given that I really don't wish to exceed eight players.  Am I being too greedy?

Whatever else happens, I guess this email makes the whole thing REAL.  No backing out now!  Lands of Ara, here we come in 2010!