This post has been a long time in the making. Originally inspired by James M's posts on his favorite and least favorite classic D&D monsters, what follows is a list of my top-ten canonical D&D monsters of all time, in no particular order.

1. Giant Toad: The VERY first time I ever played AD&D, I was run through a solo adventure by my best friend Andy. I had no idea what I was doing, since all my experience playing D&D was based upon my own incomplete understanding of Holmes, which I mostly played with my younger brother and various babysitters who were kind enough to indulge me in this. (It was not until sixth grade, when I met an older kid named Michael Oshiro, that I learned how to play AD&D -- and to play T&T, and to use foul language -- properly. But I digress.) On the occasion of this first AD&D solo adventure, I was a first-level fighter in a dungeon, and one of the very first doors my character opened contained a Giant Toad! Combat ensued, and within a couple of rounds, my character was killed by the monster. While I now can look back and see that it is possible that Andy's puckish streak, which could occasionally veer into sadism, may have been at play here, nevertheless I came away from that experience -- a TPK! -- forever fearing Giant Toads in D&D.

2. Red Dragon: Although I have become fond of black dragons in recent years (perhaps because I have also become obsessed with swamps), for me, the red dragon will always be the most iconic and scariest of the evil dragons. This probably has a lot to do with the cover of the Holmes D&D set as well as this illustration of Smaug in my hardbound copy of The Hobbit: 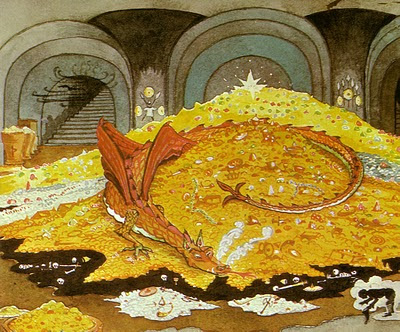 3. Owlbear: Owlbears rule. They always have, they always will.

4. Orc: The gold standard of low-HD D&D monsters. You can have your kobolds, your gnolls, your goblins, your neanderthals, your trogs -- but for my money, the best 1-2 HD monster in the bunch is the good old dependable orc. Again, I confess a likely Tolkien influence here.

5. Beholder: Do I even need to explain this one?

6. Lich: Acererak is the key inspiration here, S1 Tomb of Horrors being the module that introduced me to the existence of liches in the first place. Now I love to use them myself. As my obsession with D&D vampires attests to, I am a big undead fan in general, and liches are like super-elite undead. What's not to love?

7. Hobgoblin: As I have previously posted, I have never had much truck with Goblins in D&D (though, thanks to James M, I am now coming to appreciate them as a PC race), but I frikkin' LOVE hobgoblins. I think this is again due to a Tolkien influence -- I have always pictured "goblins" and "hobgoblins" as something huge, strong, well-organized, and fearsome. To me, hobgoblins should be more badassed than orcs, and one of the toughest humanoid monsters regularly encountered in a low-level D&D campaign. 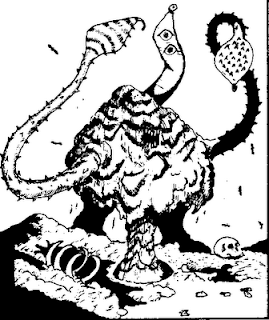 8. Otyugh and Neo-Otyugh:  I have always loved these things, sort of a cool "abomination" type creature with weird eyestalks and tentacles.  Like a mid-level, poor-man's beholder perhaps.  I especially like that regular Otyughs are described as scavengers who will not typically attack PCs directly, yet their more powerful Neo-Otyugh cousins are more bold and aggressive.  To me, this suggests an interesting familial relationship between the two types, wherein a single Neo-Otyugh (or perhaps a mated pair) will have a group of smaller Otyughs around to clean up the scraps after a hunt.

9. The Undead: Okay, this may seem silly, since I already listed liches separately, but dammit, I LOVE the undead. Besides humans and hobgoblins, the undead are my most favorite of all monsters, and, when justifiable, the most frequently encountered foes in my campaigns. Deserving of special mention: skeletons, wraiths, and wights. Mummies are reserved for special occasions only. 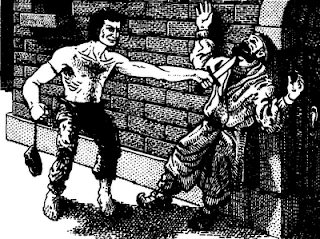 10. Human: Like noisms at Monsters and Manuals, I am a big fan of human opponents and use them far more than I use any monster or monsters -- or at least I used to. Throughout the 1990s I probably pitted my adventure parties against human foes in roughly 60% of all encounters, maybe even 70%. In those days anyway, I liked to make non-human monsters more of a rarity, plus I LOVE insane and sadistic serial-killer human types, and have a lot of fun as a referee experimenting with their twisted mentalities and antisocial behavior. Yes, mine is a campaign world filled with psychologically unhinged people.  However, now that I am back playing old-school D&D (in the form of Labyrinth Lord), I notice I am using more and more non-human monsters these days, and so my "human foes used" percentage is way down.

- Dinosaurs:  I omitted them from the Top Ten because despite my LOVE for dinos, I don't really consider them a "classic" D&D monster -- i.e., when I think of dinosaurs, D&D does not immediately leap to mind (The Lost World, Land of the Lost and Jurassic Park III do, though). I usually throw a "Valley of the Dinosaurs" into most of my adventure campaigns at some point or another.  For the record, my favorite dinos include Triceratops, Ankylosaurus, T-Rex, and (technically a non-dinosaur) Dimetrodon.

- Xorn:  I've never actually used one in play, but I love their weird look and their appealing name. 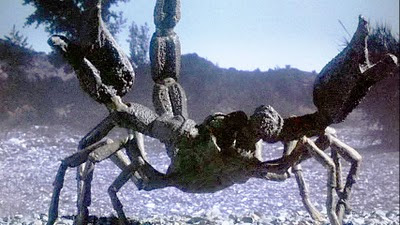 - Kuo-Toa: An old favorite ever since Module D2, and particularly cool as revamped for B/X by JB!