Our latest Arandish Labyrinth Lord session (played 12/13/10) was one of those that took a sudden twist quite early on, leading the party (minus Hazel, whose player was sick) into very different circumstances than I would have guessed they'd find themselves at the outset.

We left off last session with the group encamped at the bottom of a big cliff, nestled into the mouth of an as-yet-unexplored valley just south of the Stonehell box canyon.  It was a swampy area but the PCs -- Dak (Dwarf-4), Yor (Dwarf-4), Uncle Junkal (Bard-4), and Innominus (Clr.-5) -- found a patch of higher, dry ground upon which to camp, and set watches for the night.

The first watch went to Dak the Dwarf.  He hadn't been watching long when he heard the sound of a couple of very large humanoid beings approaching the camp from the west (from the mouth of the valley).  As they got closer, Dak identified them with his keen infravision: two Stone Giants.  He awakened his comrades.

It was swiftly decided in a whispered conference that Uncle Junkal should sneak out of the camp accompanied by the Stone Giant he had charmed during one of the prior session's encounters.  This he did, and upon meeting him the two intruding Stone Giants seemed quite happy to see their lost stone giant comrade.  Once Uncle Junkal conveyed via hand gestures that he intended to allow the charmed giant to return unmolested to his fellows, the two new giants indicated that all they required was a bribe of 600gp not to reveal the presence of the PC camp to the hobgoblin army on the ridge above.  The PCs paid and the three stone giants left in peace.

Nothing further occurred on Dak's watch shift, but not long into the second watch, which was Uncle Junkal's, a horrific slurping noise was heard approaching from the east, from deeper in the valley.  Soon Uncle Junkal spotted a bulky, grotesque creature sludging half-submerged through the swamp muck toward the camp, and he awakened the party.  Protruding from the water they saw this: 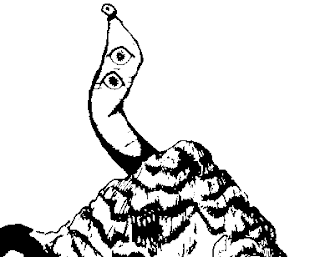 Fierce combat ensued.  The party's various bow users were unable to score a hit on the half-submerged abomination, then the next round the thing crawled up onto their mound and was upon them.  This was, of course, a dreaded Neo-Otyugh (called an "Advanced Otyugh" on AEC p. 133).  It won initiative and began attacking with two lashing, barbed tentacles and a monstrous bite.

Early in the melee, the foul beast killed NPC Rolfe the Mizarian with two lashes of its tentacles.  Dak, Innominus, Gorgo (Dwarf NPC) and Uncle Junkal's charmed rock troll repeatedly attacked the thing, to little avail, though Dak did score one key hit for which he rolled his nightly d30 for the damage, doing 20 points of damage in one courageous battle-axe attack.  Despite killing Rolfe and successfully biting Dak and Gorgo, the powerful Neo-Otyugh was slowly beaten down, though not before it scored a devastating critical hit against Innominus, killing the cleric instantly.  As if in retribution, the next round the rock troll dealt the Neo-Otyugh a death blow, and its foul, grotesque carcass oozed back into the swamp and was gone.

The party instantly chose to saddle up their horses and wagon and, with NPC henchmen Gorgo, Darvey, Garvey, and Marko in tow, they hurried back east through the mountains to the Minochian town of Fortinbras.  They arrived the following afternoon.

Knowing from prior experience that none of the resident Brothers of Carcoon were high-level enough to be able to cast Raise Dead on Innominus, the PCs prepared to press on to the larger city of Farn Junction three days further to the north to obtain that service from the clerics there.  However, as soon as they arrived at the Drunken Yeti Inn in Fortinbras, they learned that the night before -- the same night Innominus died -- the ruler of Southern Minoch, Baron Kaminster, had mysteriously perished in his manor house just outside Fortinbras.  The Baron's body was found by his servants in his bed in the wee hours of the morning, completely exsanguinated.

This was a lucky break of sorts for the PCs, since the Baron's mysterious death was bringing the High Priest from Farn Junction, Father Ouzo, into Fortinbras to investigate.  This meant that for a price (2400gp) he would likely be able to cast raise dead on Innominus, which he did indeed do the next morning.

Uncle Junkal busked in the streets to earn extra cash and spent his late nights in the Drunken Yeti, plying the locals for rumors and information.  He found out that the late Baron had two children: an older daughter who lives in the Free City of Kaladar, and a younger son whose whereabouts are completely unknown.  Neither child had ever shown much interest in Minochian government, and nobody expected the Baron to die so soon, having been barely fifty years old at the time of his exsanguination.  Many locals think that the current King of Minoch will take advantage of the power vacuum in Fortinbras to send his own appointed regional governor down to the area to take charge within the next few weeks.  Meanwhile, the local militia, under the command of Sheriff Rotwanger, is keeping order in the region and heading up the investigation into the identity of the Baron's killer.

Dak and Yor adjourned to the dwarven pub in town, the King Hargon Inn, to live it up with their own kind.  There they learned that the local dwarves have their own unique take on the death of the late Baron.  Given that Kaminster's heirs are out of the region and very likely uninterested in ruling Southern Minoch, why not sieze this opportuinity to put a dwarf (or dwarven coalition) in charge?  The Minochian dwarves have a long history in the area and have every bit as much right to govern as those queer Minochian humans!  Dak, knowing that Yor is from a respected dwarven mining family from Farn Junction, bought everybody in the King Hargon drinks and started an informal,  grassroots campaign to support Yor for such a position of leadership.  Meanwhile, after a few days in Fortinbras, Yor himself ventured north to see his family in Farn Junction and to learn if they had any powerful connections that could aid him in a bid for power in the region.

Notes and Comments on the Session

As Innominus' player emailed to me the next day, "Innominus will now hold a death grudge against that entire valley, and probably against everything that is a potential atrocity."

As I replied to that player, I couldn't believe my good die rolling that night either. I was of course eager to throw a little scare into the party, as they had been plowing through hobgoblins with relative ease over the previous few sessions, but a series of three rolls (of the type I had emphatically NOT been getting in recent sessions) made that valley especially dangerous to the party that night:

1. I rolled no less than THREE random encounters over the course of the one night. Yes, it's true, in addition to the Stone Giants and the Advanced Otyugh, if the PCs had stuck around any longer, there was going to be yet one more monster coming after them during the last watch shift of the night. (I never got around to rolling to find out which monster.)

The rest, as they say, is history. A deadly valley indeed, worthy of Innominus' hatred!

Overall, as DM (excuse me, as Labyrinth Lord) I had a great deal of fun with this session, for while I hate to see a PC die, especially so swiftly and as a result of such an amazingly improbable couple of rolls, I do feel that the campaign was in need of a dangerous occurrence like this to remind the PCs of the preciousness (and precariousness) of their lives.  Furthermore, though I could not have planned it this way, I was secretly pleased to have the party back in Fortinbras so soon to get wind of all the sinister upheavals taking place there.