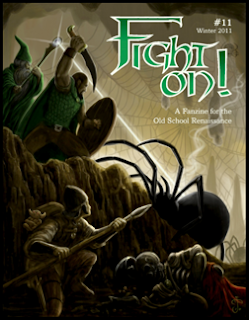 As previously promised, I here offer a review of Fight On! Issue #11.

To begin with, Wow!  What a cover!  This is one of the better Fight On! covers I've seen, a really compelling depiction (by Mark Allen) of an exciting spider encounter in progress.

As for what is inside, here are some of my highlights:

+ Two new PC classes are noteworthy: Sylvan Elves by Scott Moberly and Vampires as PCs by Calithena.  The former is a succinct but compelling take on Wood Elves for Labyrinth Lord, and I plan to compare-and-contrast Moberly's approach to the "Fey Class" by Gavin at the City of Iron.  In my own campaign, Elves are NEVER PCs anyway, but I still like to have a template upon which to hang my NPC elves, and I like Moberly's idea to grant Wood Elves some spell-like abilities but no spells per se. Meanwhile, something must be in the air around vampires-as-PCs, since Calithena's writeup is the second one I've seen this month.  Hers is not quite as detailed as Peter Regan's, and despite my usual aversion to fine granularity, I may slightly favor Oubliette #5's piece on this subject, but I like that each mag has something original to offer on this somewhat overlooked topic.

+ "Draala" by Jason Vasche: If I'm not mistaken, this is a classic Star Frontiers race, here adapted for OD&D use.  I may or may not ever use this, but it is the kind of genre-crossing stuff I always like to see in Fight On!

+ Jeff Rients delivers a couple of highly creative and inspiring tables, including one for "Underworld Computers" and one for "NPC Party Situations."  Both of these are now horked for use in my personal DM folder!

+ "On Fantasy Chronography":  A superb article by Del Beaudry about an oft-overlooked aspect of FRPG setting design: timekeeping.  Not in the round-by-round sense, but in terms of how one's RPG world reckons time on a day-by-day basis.  Thought-provoking and well considered, this article is a must-read for all world-builders.

+ Artwork-wise, besides the superb Mark Allen cover, I would like to call attention to some of Fat Cotton's illos, especially the wonderful tableau scene on p. 3.  There is something vaguely Erol Otus-esque about that picture and its style, and I like it.  I also want to single out one of the issue's comics, "Sir Tendeth" by Sniderman: the second strip (about the werewolf) is the first gaming mag comic that has made me laugh out loud in quite some time.  Well done!

As I have said before, Fight On! is the flagship print publication of the OSR, and its standards -- for the quality of its content and the "glossiness" of its material publication -- are still unmatched.  It is a positively fine magazine that deserves the support of we old-school gamers.  Get your copy of Issue #11 ASAP!