Session B-1: A Bargain Is Struck

[Note: Following the campaign name first-letter designations mentioned here, I have numbered this session "B-1" to identify it as the first session of the Brockport Campaign.]

The party began their adventures together lost in a vast desert, one day's worth of water rations away from a slow death by dehydration.  They had been traveling across the sands by night after their caravan was dispersed in a sandstorm three days past.  Then, on the morning of their fourth day of wandering, they saw this: 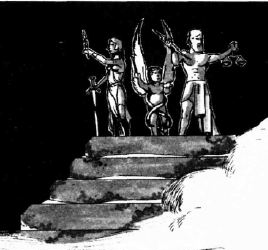 Out of desperation for food and water they sought a means of egress to the buried step-pyramid they had discovered. Lo, there was an open doorway on one side. Mathias explored it and found that the door was held open by the skeletal remains of a large humanoid, roughly hobgoblin-sized. 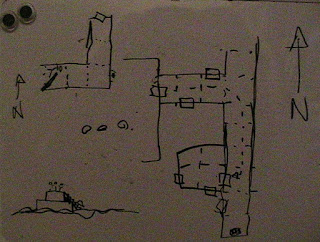 Session B-1 Map.  The lower left corner depicts a side cutaway view of the desert step-pyramid; the pyramid's entrance hallway is shown at the upper left corner.

Stepping over the skeleton, the group cautiously proceeded down the hall, and found a pressure plate in the floor, and an already-discharged crossbow trap at the end of the eastbound hallway section.  Blocking the door to the outside world open behind them, they headed around the corner, and to the northern stone door.  It opened easily, admitting the PCs into a large square chamber with three central bronze vertical cylinders.  Each 6' diameter cylinder went floor-to-ceiling and had a bronze door on the north side.  The PCs instantly started fooling with these, and found that the cylinders were vertical passageways with ladders leading up into the interior of the three statues atop the pyramid.  They also led down to a messy looking storeroom below.

Korvash opened the left-hand cylinder door, and darts shot out from the north wall, hitting him.

After that, the PCs stood to the side of each cylinder door while opening it, a fortuitous strategy: nothing happened at the central door, but the right-hand one, when opened, triggered a floor trapdoor to open right in front of it.

Looking down through the opened trapdoor, the party saw the filthy storeroom below: debris littered the floor, though there were a few intact crates and barrels at the north side.  Spending a moment to examine the place from above, Thorgald poked a lantern on a stick through the trapdoor hole.  It is then that the group noticed some huge insect-like things hunched down in the debris of the storeroom; three in all.  The PCs pulled out bows and shot the three giant insect-things to death from above.  Then the archers remained up top, near the trapdoor, while the other party members descended the right-hand tube-ladder to the storeroom.

The storeroom contained lots of debris, and a few casks partially full of some kind of oil.  Mathias took twenty minutes to gather the oil into one pot, and got about six flasks worth.  Meanwhile, Jarl the dwarf checked out a long-disused forge in the room's southeast corner.  He inspected the forge for signs of dwarven manufacture or runes, but found none.  He did find, in the ashes of the forge, a golden mask, depicting the face of the old man also represented on one of the pyramid roof statues.  He showed the mask to his colleagues.  There were two doors leading out of the storeroom, east and west, but the PCs decided not to try them.  The group re-convened in the upstairs room.

They decided to wedge the cylinder doors closed, post watches near the open trapdoor, and camp out in and recuperate in the upstairs cylinder room.  Thorgald called upon the benevolence of his deity, Ragnar, to heal Korvash, and then the group rested.

That night, an old-man-masked individual showed up in the eastern entrance to the storeroom, distractedly tossed some offal or food remains from a slop bucket into the chamber, then turned and left by the eastern door as swiftly as he had come.

The party decided the next morning to lay in wait for the masked man's return; they assumed he would be back.  So they hunkered down in the downstairs chamber, leaving Yohan above.  Nothing happened that night, but the party decided to wait it out one more day, and on the next night, their third inside the pyramid, the elf and the thief heard the approach of footfalls beyond the eastern door.  They guessed there might be four individuals approaching.  They remained hidden.

The eastern door opened, and in came the masked slop-bucket guy, and the party could see three other golden-old-man-masked guys framed in the open doorway, waiting behind in the hallway.

Evelyn cast sleep and all four masked people slumped to the floor.

Moments later, the whole party convened downstairs in the storeroom and awakened the slop-bucket maskie.  After a bit of persuasive talk from Thorgald the Priest -- "Hail the Strombringer and the Balancer!" -- the maskie, a Follower of Gorm named Horak, was convinced that the party meant his group no harm.  During a moving explanation of their current woes, Thorgald likened his own deity, Ragnar, with the warrior-god Gorm, and this impressed Horak so much that he offered to take the PCs to his leader, who was nearby.  They went. 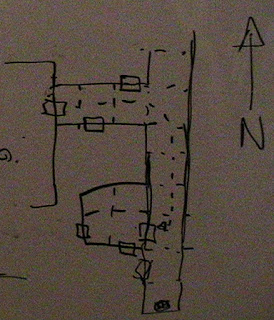 Here's where the PCs went to meet the Brothers of Gorm.

After walking south down a long hallway and turning right into a barracks room with multiple Gorm-mask-wearers, the party met Kanadius, Leader of the Brotherhood of Gorm.  After explaining their (pitiful) situation, the PCs were able to convince Kanadius that they could be of service to him as spies or mercenaries in exchange for food and water.  Kanadius agreed, offering them food, water, and safe haven here in the area of the pyramid occupied by the Brotherhood, in exchange for the completion of a task: the party must descend one level further into the pyramid and find out if the "Warrior Maidens," who occupy almost half that level, are forming a coalition with the evil "Agents of Zargon."

The party agreed to this, and that is where we will pick up next session.