There but for the grace of Endra goes Spawn:

I was staying near the Place d'Italie until yesterday, and had until then shunned one road sloping disconcertingly downward from the circle called: 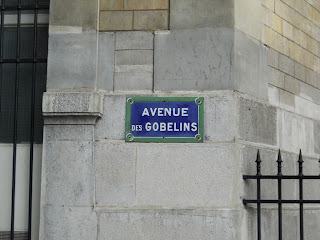 That's right. Goblin Avenue. But I figured, whatever, it's just a bunch of goblins, I have no shiny objects on my person, now's as a good a time as any to check this out. Just after taking that photo a detachment of the Armee Gobelin tore through the P. d'Italie circle lusting after the 14 Julliet fireworks extravanga on the Champs Elysees. 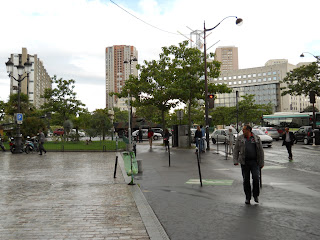 I started down the Goblin Ave., and it wasn't clear who the goblins were. But everyone was really short. I assume there was some sort of tricksy magic spell on the street. 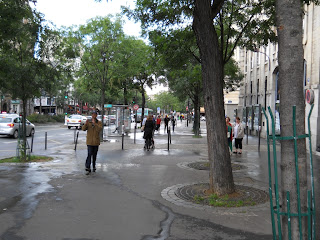 Those 'trees' are actually tall shrubs by human standards. As I progressed down that mad infernum of a road, I saw this spectacle: The Goblin Cave. 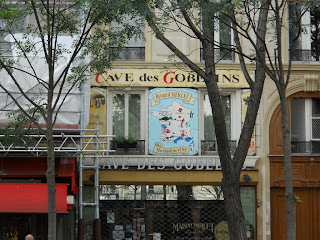 Of course they try to trick you into entering their stupid cave by saying it's all about wine. But seriously goblin folks, I read through B2 back when I was 10 years old. I'm not falling for that beeswax. Further on there were more signs of not just wandering goblins or rag tag groups, but a working goblin society. When goblins need a prescription filled they go to the Goblin Pharmacy. 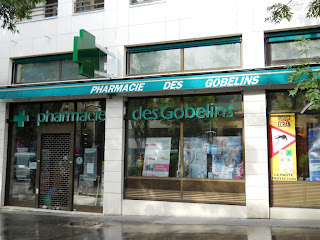 But only a total dumbshit buys any 'healing potion' from a goblin. You goblins may say your store is gated shut because it's a holiday, but I know better. Not even 1st level schmucks are falling for your tired old shenanigans these days, and you're going out of business. As we speak Mike Mearls is getting ready to flatten your shit like a crepe with his 5e steamroller, fools.

But this was weary work, and I became edgier as I descended further down Goblin Street, not knowing who was human and who was goblin. So I stopped off at an ostensibly human brasserie and had a couple of beers. I was suspicious of the waiter, because when I asked what beer they had on tap (a presion, as they say in gobelinois), he told me they had Kronenbourg. Ha ha, Msr. Gobelin, how drole. I quaffed warily, as you can see: 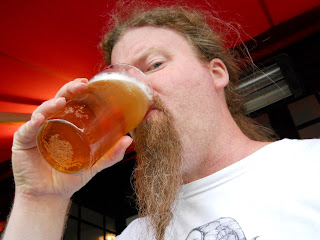 My Flailceratops T-shirt probably protected me from the worst effects. In the middle of the second 50cL I developed a large vagina in my torso and lost my passport inside of it. I'm hoping that if I keep drinking Kronenbourg I'll be able to pull it out before I have to get on a plane again. I'll keep you dear readers posted on developments.

Oh yes, I almost forgot. There is a stop on the metro map labelled "Ourcq" on Ligne 7. I won't explore that without a better AC and a few NPCs. I guarantee hirelings a 10% share of the loot and 1/4 share of XP, but you have to pay your own way. (I'll pay for the metro tickets, but you have to get to Paris on your own.)