Get Your Small Game On: The Joy of Cooking (1974 Grindhouse Ed.) 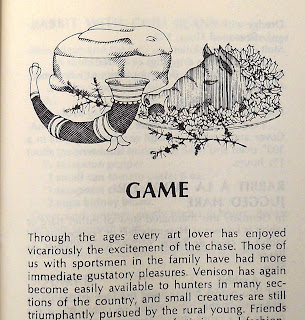 From Thoust Spawn:
In the midst of a garbagey OSR week, I found my thoughts turning to FOOD, since that is one of the few things I have never become fundamentally disillusioned by and bitter about. At one point I went over to The Happy Whisk’s blog for about an hour and just stared at all the great food pictures and read the nice comments and cheerful repartee to get a break from the BS. I have to say I consider myself an Old School cook, as well and Old School RPG player. There are many odd overlaps. For example, the copy of Joy of Cooking I own was a used copy given to me by a friend (as were my AD&D PHB and DMG), and it is the 1974 version.
People, let me tell you: This book is Old School. They give you everything you need to cook, and let your imagination do the rest. There are some very basic instructions here: e.g., they take the time to tell you how to make toast, non-judgmentally. There are also solid treatments of obscure foods you might encounter (e.g., p.512 covers Pigs’ Ears, Chitterlings [Chitlin’s], Cockscombs, and finishes with an advisory piece, “About Marrow”, wherein we learn marrow can be substituted for brains in any recipe – good to know!). Many recipes have to be house-ruled (always double or triple the amount of garlic in these recipes), and some are best ignored, like encumbrance rules. The 1974 JoC feels a lot like 1e AD&D to me: People take from it what they want, and nobody ever uses all the recipes. And despite the improved meal-resolution mechanics of later versions of JoC, some of the charm is lost in later revisions in the 90s. To wit, in a perverse Borgesian turn there's a section in the Cookbook entitled Game, just as in most RPGs you've got rules in the Gamebook for finding Wild Food. 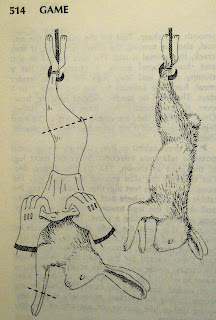 Do people use these rules often? “Rations and Foraging” in the Labyrinth Lord Basic rules, p. 46, tells us that ‘scavenging’ for food can be “accomplished without hindering travel by gathering fruits, nuts or small animals” in the course of a day. Or you can hunt and not travel, and then you get better chances of success. Despite devoting a section to Foraging and Hunting in the rules of Mr. Raggi’s LotFP:GE (Rules and Magic, p.33) the actions described are only hunting (which is covered under the Bushcraft skill in the new rules) and not foraging. One expends d10 of missile ammunition in a day's attempt at gathering food.
For Raggi foraging = hunting = meat, unless we assume that d10 crossbow bolts are being sacrificed for a basket of elderberries, or sloe apples, or majestic camas bulbs. Or if Les Stroud is your ranger, he shot d10 servings of lichen tea off of a Douglass fir. Perhaps there are no plants in the icy Finnish wastes.
Now that you've got your quarry, what do you with it? My JoC has several recipes for Rabbit or Hare (skinning them shown above), followed by Squirrel and a nice illustration of how to deal with that little guy. Note that gray squirrels are preferred over red, which are "quite gamey" (Mr. Arkhein?). 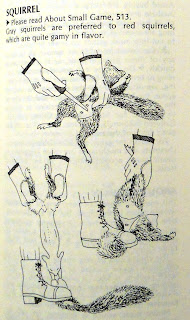 After that we have Opossum, Porcupine, Raccoon, Muskrat, Woodchuck, Beaver (and Beaver Tail), Armadillo, and then of course Venison, Bear, Peccary, Wild Boar and Stuffed Boar's Head. 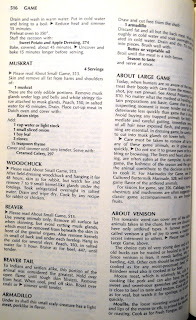 So there you have it. For those seeking some verisimilitude in foraging roleplay here's a good resource. It could also be a resource for simple hand-drawn illustrations, torture-porn, furries, and a raft of other unsavory practices. Such is the multifarious nature of a great work of literature.

[UPDATE: I just noticed a link to this great website on Christian's sidebar, The Inn at the Crossroads. Attempts to produce the great dishes of literature!]

[UPDATE 2: Here's an earlier post that would have benefited from some JoC help -- Blood Sausage Making.]