This session took place 6/13/2011 and was somewhat special: Spawn of Endra was back from fieldwork in Belize, and Hazel's player was visiting Eugene as well, so everybody except me was in one location! Furthermore, Uncle Junkal's player decided to once again violate his dissertation-related gaming hiatus, so we literally had the WHOLE PC group together: Innominus (Clr 6), Hazel (Ftr 4 / MU 4), Dak (Dwf 5), Yor (Dwf 5), Vivuli (Assassin 4), and Uncle Junkal (Rodian Bard 4).

The first order of business was to follow up with Sawith the Scribe of Kaladar, whom Dak hired at the end of last session to provide information about some of the recent campaign findings. While Dak initially had thought to ask Sawith about his recently acquired ivory chits called "Morag's Keys," he ultimately opted not to pursue that inquiry, since Innominus had asked Sawith about them before, to limited avail.*

So Dak asked Sawith about two other items he found in the saurian demon's pouch: the "fire gems" (and how to activate their powers) and the obsidian key. He learned that:

2. The obsidian key, actually made of an extra-planar substance, is from the home dimension of the balrogs, called in the Arandish tongue "Magmatron." Sawith was unable to deduce what specific locale or building or object the key corresponds to on that plane.

In the two days it took Sawith to uncover that information, the party conducted some other business in the Free City. Uncle Junkal sold off some extra armor, Hazel paid an Enchanter to recharge her wand of paralyzation (at a rate of 500 gp per charge), and Vivuli ventured outside the city gates in order to do more snake wrangling.

Then, on day 113 of the party's Arandish adventures -- it is now late fall, only a few weeks until the onset of winter -- the group loaded up the war wagon, mounted their Mizarian steeds, and headed west out of the Free City, headed toward Riverhold, five days' travel [that is, five 36-mile hexes] due west. They encountered no hostile forces along that leg of the route, which was no surprise since the Endyn Trade route is quite well-traveled and -patrolled along that particular leg.

Eager to reach their destination in Northern Achelon, the group decided not to linger in Riverhold, and immediately turned northward, following the Endyn Trade Route due north six more days to the walled Achelonian town of Holtboro. 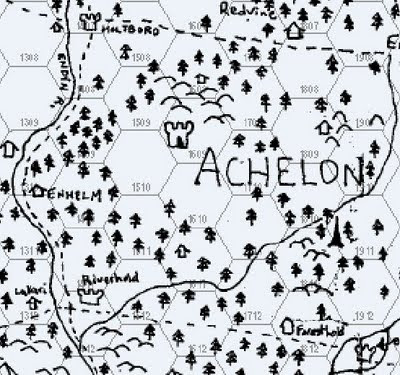 However, this north-south route is not so well patrolled as the stretch between Riverhold and Kaladar, and the group faced two dangerous encounters as they camped in the woods near the road on their second and third nights [hexes 1311 and 1310, respectively].

The second night, the group was encamped and asleep when the final shift's watchman, Innominus, heard some noises up in the trees. He blew on his slide whistle (acquired in Kaladar) to alert the rest of the party, and soon enough the group saw two huge, black spiders skittering through the treetops toward them. A pitched battle ensued, and Hazel and Viv, who each opted to sleep in tree branches, were almost stuck by webs the spiders cast in their direction. But a few tossed oil flasks and melee strikes later, the party managed to kill the two black widows without taking a single hit amongst them. Viv attempted to extract some venom from one of the corpses, but the dead arachnid was too mangled to make such salvage possible.

On night three the PCs had an even more disturbing encounter: once again, Innominus heard noise approaching the camp during his watch shift, and quickly recognized the five approaching figures as wights. Muttering prayers to Endra, the cleric turned two wights immediately, then set about waking the party and preparing two glyph of warding spells (in their "Blast Glyph" variation -- see AEC p. 35) with which to protect the area around the war wagon. Winning the first round's initiative, the party began shooting missile weapons at the advancing undead, and, after casting his spells, Innominus threw a Holy Water Bola at the wights as well. Within a few rounds, the wights were taken down by a combination of magical and steel missile fire, the bolas, and, ultimately, stepping on the Blast glyph inscribed around the party.

Curious about where the wights had come from, the party proceeded across the road and into the woods, tracking the path of the undead beings back to a small, rural graveyard some distance west of the Trade Route. Hazel cast ESP; Viv hid in the trees; Yor hung back to cover the group's line of retreat.

What the party discovered in the graveyard was quite strange: seven human men wearing coarse black cloaks were scattered around the graveyard, committing various sodomic acts, mostly with each other; one lone fellow was rubbing an obviously drugged black cat around on his exposed genitals. All of the orgiastic sodomizers appeared to be in a somewhat trance-like state, which was broken when the PCs entered the graveyard proper and announced their presence to the men.

Upon being so confronted, the cloaked sodomites stopped what they were doing; some of them may have even looked mildly embarrassed. Dak began questioning them about what they were doing in a graveyard in the middle of the night, and their ostensible leader, Bill, explained that they were local farmers from the village of Enhelm who were simply protecting the grave site from grave robbers. However, when Hazel scanned Bill's mind using ESP, she found that he had a recent memory of a black-cloaked figure bathed in sickly blue light, and foul, unnatural beings rising from five disturbed graves. Bill would not speak openly about this memory, though; he seemed unaware of it or unable to speak of it. He further insisted that the Arch-Deacon, a religious leader in Enhelm, would hear of this intrusion. During the verbal interrogation process, Innominus knocked Bill out cold.

Ultimately, the PCs sent the robed peasants (carrying the unconscious Bill) back south to Enhelm, and searched the graveyard for clues. Innominus cast Detect Magic and Detect Evil and found that the five recently-disturbed graves radiated lingering magical energy, and that two of the graves also radiated very strong evil. Digging in the latter two graves, the cleric found two white gold or platinum coins, inscribed with three strange runes, and the source of the potent evil emanations. He kept them, and the party left the graveyard and returned to their camp.

Three days later, on Day 125 of their Arandish adventures, the group arrived in Holtboro, and made their way to the ancestral home of Sir Boren, just an hour or two west of town. There they were greeted by Sir Boren's younger brother, Sir Barton, who thanked them profusely for returning his beloved brother's body to Achelon. The family rewarded the party with 10,000 gp and also offered to equip them for whatever venture they had planned next. The party asked for a fully crewed riverboat to take them down the Endyn River to the Bay of Noffel. Sir Barton complied.

While their riverboat was being readied, the party stayed on at Sir Barton's for five days. There they saw many locals come to the walled manor house to pay their respects to the deceased knight -- the Late Sir Boren had been immensely popular in the region. A small number of the wake's attendees bore the Bee Symbol -- the same as had marked Sir Boren's golden broach -- on some piece of jewelry or as a patch on their clothing. At one point Hazel asked a female noblewoman, Lady Skaren, about the significance of the Bee symbol. The Lady asked Hazel & Co. to meet her at the Boar's Head Pub in Holtboro the next evening, for discussing the Bee symbol in front of Sir Barton simply would not do.

The next night, the bulk of the party reported to the Boar's Head, where they met Lady Skaren and two other local aristocrats, Morgan the Brave and Sir Eagleton. All three of these folks were "dressed down" in simple traveler's garb, though all of them wore a patch with the bee symbol on it.

Lady Skaren explained that they were members of a regional group called the Bee Consortium, whose purpose was to prepare the local nobles, families, and residents for the possibility of hobgoblin incursions from the northwest. The local area, lying on the extreme northwestern frontier of Achelon, was potentially vulnerable to such attacks, since the nearest regiment of the Achelonian Queen's soldiery was some weeks away. The members of the Bee Consortium felt that it was upon them to protect and prepare themselves; certain other community members, such as Sir Barton, felt that the Consortium was needlessly alarmist and that the Achelonian military would be able to protect them if hobgoblin armies came raiding from the northwest. Indeed, the PCs learned that while Barton obviously loved and respected his brother, he would not discuss his brother's politics at all and was opposed to helping the Bee Consortium in any way.

Lady Skaren further explained that the Late Sir Boren's adventure to Stonehell had been a fact-finding mission, to confirm or deny rumors that the Hobgoblin population of the Gray Mountains (some weeks away to the west-northwest) had discovered a substance (presumably the Black Oil) that would allow them to travel by day and survive in sunlight. Sadly, as Gark and the PCs had learned, this was quite possibly true.

At the end of their meeting, the PCs requested some carrier pigeons from the members of the Bee Consortium, so that they could get back in touch if need be. This was done -- three such pigeons were provided by the good Lady -- and that is where the session ended, on Day 130 of the party's Arandish adventures.