The Spawn of Endra sends out this important bulletin:

So we're here playtesting Carter's scenario for the OSRCON game he's running, The Tower of Death*, and I rolled up 2 3rd level PCs, a Thief and a Magic-user. I've been playing a cleric for the last year and a half that we've been gaming, so I took the opportunity to play some new classes that I haven't worked with for ages.

This may not be news to many of you, and forgive me for not having read your post about it from 2009 (but do send a link in the comments), but I found out that low-level thieves are the last folks you want searching for traps. Looking through the tables and randomly opening up the LL rules to "Traps and Trap Detection" (p. 45), I learned that a first level thief is actually worse at finding traps (14% success) than a non-thief (1 on d6; 16.666%), and WAY worse than a dwarf (1-2 on d6; 33.333%). Weird. I thought maybe this is one of those odd miscues in Lab Lord rules, but in fact my Moldvay Basic has it even worse: Thieves go 10%, 15%, 20% for the first three levels where everybody else is d6ing the night away. In Lab Lord the thief only gets as good (almost ... 0.333% short of being as good) as a generic dwarf at LEVEL 5!

As one of our players described the exchange after the thief fails to find the 8th trap in a row that the dwarves detected: "Yeah, well, I just always wanted to be thief growing up. I never said I was GOOD at it, it just seems really cool to be a thief. That's what I'm doing." So B/X essentially encodes into thieving the dynamic of hipster ninja-ism. 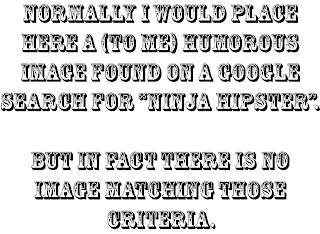 Yeah, you know all this lore about shuriken manufacture and funny slippers, and can quote every ninja film and manga, but you couldn't climb over a chain-link fence in real life if you really had to. The skinny jeans make it hard enough, but then how does the ninja hipster approach the fence while maintaining proper ironic distance? The ninja hipster finds itself trapped in a Zeno's Paradox of continually edging closer and closer to the fence, never quite reaching it ... and then the non-ironic Rottweiler bites into his/her ass, tears a chunk out, and irony must be put aside -- if only briefly.

At any rate, this mechanic deserves a closer look, but it may be another reason to favor Dyson's 2d6 Thievery mechanic (found in the delicious Dyson's Dodecahedron #1) over the percentile approach of B/X-LL. Either way, you've got to make the average thief always do better at detecting traps than other PCs, or at least as good as a dwarf to start off with. Otherwise, why bother with the Thief?