From Spawn at Lunch:

I read a bunch of important stuff over on RPGNet about how 2000cp is anti-imagination and the sign of a lazy DM and it stole your grandma's car and crashed it into a pet store killing dozens of fuzzy little kittens and bunnies. God Damn that 2000cp! A couple of folks mentioned that in fact, you might use 2000cp in a module as a guideline for determining the treasure, in which case you might roll dice to figure a specific and random amount. I was really thrown for a loop by that idea -- so mind-shattering was it -- but I gradually recovered. Basically you're using 2000 as a mean of the distribution and you figure out some die combo to vary it around the mean (or assume the 2000 is the product of a similar operation, e.g., d4x1000, and then add some other probability distribution to that). Now obviously this is just as lazy, but more sinister because it cloaks its laziness in action and "randomness". Ideally you'd want to trace the history of each copper piece from when it was minted to when it arrived in the ratshit pile to explain why there are exactly 598cp in the pile. Of course we all want this from D&D, but we won't get it, not from JMal and not from nobody.

(There should be a Kickstarter for a supplement that describes the unique history of each one of 598cp in a box. Volume 2: The Saga of 3912ep in a Sack. Written by George R.R. Martin.)

The problem with the randomizing business is that the mechanic behind it can often be guessed at because of certain a priori knowledge: the 6 standard dice have discrete known ranges, typically are not mixed, and have symmetrical distributions (if not Gaussian ones). As more and more piles of treasure are found, eventually the shape of the overall distribution will emerge, showing the DM's random mechanic, and then everyone will see what a lazy sack of shit he or she is. This is essentially a form of Monte Carlo sampling that the players are doing. In fact players use a version of this during, e.g., combat to figure out a monster's HD, damage die for unconventional attacks, and so forth.

What you want is to draw the underlying distribution from a non-normal, non-symmetrical set of probabilities so that no matter how long they spend in your megadungeon, players will never be able to intuit the underlying random mechanics for laying copper pieces around. "How do I do that?", you ask? Fuck, you Lazy Stupid DM! Do I have to explain everything to you? Ugh!

A relatively easy way is to treat your value like a radiocarbon measurement (conventional age, BP), assign some sort of uncertainty to it (+/- 40 is common, but whatever), and then calibrate it against the atmospheric 14C curve (IntCal09, for example). The relationship of actual years to radiocarbon years is not one-to-one, so the measurement is transformed by the curve into a typically non-normal distribution. Here's an example using OxCal: 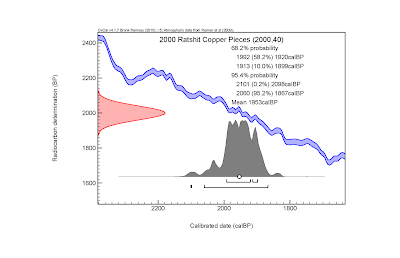 Now taking the weighted mean of that distribution following Telford et al. 2004 (always a dangerous shorthand) we can now say there are 1953 ratshit befouled copper pieces in the room, and everyone's lovin' your megadungeon all of a sudden. Of course, this only gets you so far, since the curve transforms the data the same way each time.

No problem. Instead of using the R_Date command (for a radiocarbon date), use R _Simulate. This is an interesting exercise in both phenomenology and probability. You have it simulate a radiocarbon age for a sample of calendar age X (which will be your number of copper pieces) assuming a certain measurement error (again, we'll say 40) depending on what type of AMS device you've got. This then incorporates both the gaussian measurement error and the weirdness of the curve, and does it differently every time you run it. Your laziness, stupidity, lack of imagination, and absence of any reason to live are all now well shrouded in the swirling mists of the carbon cycle: 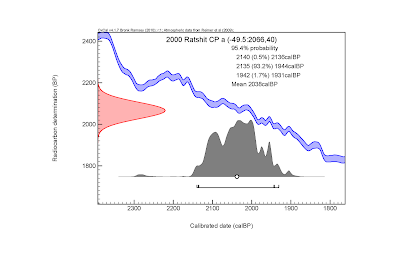 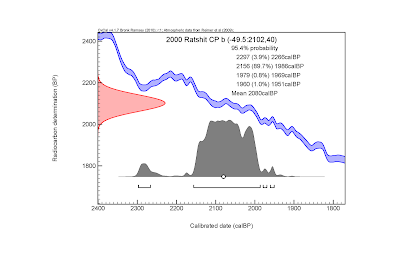 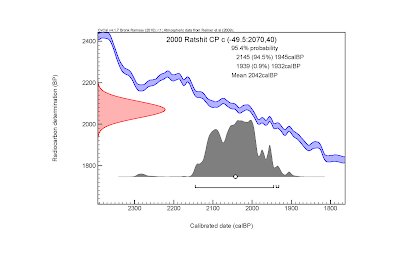 There you go. Now you'll have who-knows-how-many unique piles of coins: 2038cp, 2080cp, 2042cp... the possibilities are endless. If you change the measurement error, a new world of treasure opens up. Try the Marine curve or the Southern Hemisphere curve! Rejoice, for you have now added real flavor and texture to your megadungeon. Next time we'll sample from deeper within the mass of data to ensure the DM's logic is so far abstracted from the shitpile as to be impossible to guess at.