While I am not actively working on a megadungeon project at present, I am still a big fan of dungeon design theory, and have been reading some great posts on the subject of late. Here are just a few of the great resources I've been enjoying: 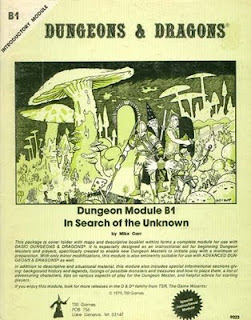 Was Module B1 a Good Design? This is a post that Spawn of Endra mentioned to me during a recent conversation, then I backtracked and found it on Delta's D&D Hotspot. I think many of Delta's basic assumptions are spot-on, and I would also urge folks to read the comments to the post, especially this one by Justin Alexander, in which he provocatively suggests a new approach to "old-school," minimalistic dungeon location descriptions, saying that:

Minimal keys are great. Minimal keys that primarily focus on creatures and treasure? IMO, you're doing it wrong. [. . .]

I don't think DMs should prep the multi-paragraph litanies of B1, but I'd much rather have a key that said:

27. A floor of smooth slate and two thrones of white marble. Purple and yellow draperies on the wall.

127. ORC SERGEANT. The leader of the outpost (8 h.p.) with longsword and heavy crossbow.

What an interesting idea! I don't know how extensively I agree with it, but it has me thinking.

Of course, Mr. Alexander has a great deal of credibility, in large part because he is the author of another classic dungeon design post. . .

Jaquaying the Dungeon. I actually must again thank Delta for reminding me of this great series of posts, though I am a fan of The Alexandrian and have read them before. In them, JA discusses how to "open up" a dungeon (and increase it re-playability value) by providing multiple entrances and exits from each level and locale. An excerpt:

In a jaquayed dungeon, the choices the PCs make will have a meaningful impact on how the adventure plays out, but the actual running of the adventure isn’t more complex as a result.

On the other hand, the railroad-like quality of the linear dungeon is not its only flaw. It eliminates true exploration (for the same reason that Lewis and Clark were explorers; whereas when I head down I-94 I am merely a driver). It can significantly inhibit the players’ ability to make meaningful strategic choices. It is, frankly speaking, less interesting and less fun.

I always follow these principles when designing modules and highly recommend these posts.

Node-Based Megadungeon Design. Meanwhile, elsewhere in the blogosphere, I bumped into Keith Davies' fascinating posts about Node-based dungeon design, which he may well carry out to a level of complexity beyond my own interests, yet I confess I find the basic idea of Nodes as a dungeon-design starting point compelling. (I also plan to look further into Keith's broader series on Campaign and Scenario Design).

And lastly, it so happens that Justin Alexander has his own series on the Node-based design topic, which I have yet to read. . . .

Please leave a note in the comments if you have other recommendations for good reading on this or related subjects.