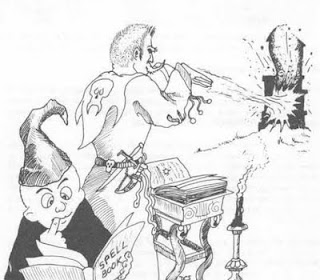 The Arandish White Council, currently headed by the great mage Arlanni, is the largest and most influential magical organization on the continent of Ara.  Both styles of arcane magic practiced by Arandish humans, Spellcasting (magic-using) and Enchantment (NPCs only), are regulated by this Council.
The ruling body of the White Council meets in the magically hidden House of Arlon in the northern reaches of civilized Ara.  However, the Council as a whole consists of guild-houses, spell libraries, and instructional facilities located throughout most of the known lands and kingdoms of the Arandish continent.  Most Arandish towns that permit arcane magical practice (i.e., most anywhere but Noffel) have a Council guildhall in them.
All arcane practitioners in Ara are required to register with the Council.  For the most part, Arandish human magicians abide by the Council’s rules and pay its fees.  Practice of Arandish magical arts outside the Council structure is strongly discouraged by the Council, and it is difficult to become highly skilled in any of the Arandish human magical arts without drawing their hostile attention.  See The Invisible Hand, below.

The Council System
From 1st through 8th Level, arcane practitioners are required to pay Council dues (see below) but do not actually get to join a color-coded Council (see Table below).  Pre-9th Level, the Council serves mainly as a resource for the magic-user—for example, Council spell libraries, the best-stocked in Ara, require current Council dues to be paid to be granted library access—and as a small monetary obligation (in the form of the dues) s/he must yearly pay.  The Council would very likely NOT send agents after a non-registered (non-dues paying) magic-user of less than level 7 or 8, unless that magician had done something specifically to irritate, thwart, or otherwise catch the attention of the Council.  However, if Council agents incidentally got their hands on a lower-level magic-using non-dues-payer (called a “delinquent”), they would assess him/her back dues (based upon how long the delinquent had been practicing in Ara) before letting him/her go.
Once a magic-user reaches until 9th Level and beyond in Ara, he becomes eligible for full Council membership, and his movements and behavior are more carefully scrutinized by the Council at all times.
Four Council levels, designated by color, constitute the main part of the Arandish magical hierarchy.  These are, in ascending order of power and importance, the Gray Council (practitioners of character levels 9-12), the Blue Council (levels 13-15), the Red Council (levels 16-18), and the White Council (levels 19-20).  These four designations apply to both Council-affiliated styles of magic, at both the local and continental level.  In other words, the groups who practice spellcasting and enchantment each have their own Gray Councils, Blue Councils, Red Councils, and White Councils.
There are separate Councils of all four colors for spellcasting and enchantment in most Arandish kingdoms, plus the solitary enchanter’s guild in the mountains of central Minoch.  There is also one Council of each color (made up of representatives from all the local Councils) that resides and meets in the northern House of Arlon.  These four Councils, which include members from every Council-affiliated style, oversee and discuss larger Council matters, legislate the doings of all the local Councils, and report to Arlanni directly.
Rank-wise, any individual White Councilperson always outranks any magician of any other Council, regardless of the level (local or continental) at which each magician functions.
Individuals wishing to practice magic-using in Ara have little choice but to join the Council system and subject themselves to its regulations.  Anyone who disregards Council regulations and does not join a Council appropriate to his chosen style of magic will eventually be noticed (certainly by the time he reaches the rank of Master) and asked politely but forcibly to join.  Anyone who ignores this request will be blacklisted by the Council, stripped of any magical aids or equipment, and possibly even banished from Ara.

Council Ranks
In order to facilitate the organization of magic into Councils, the arcane arts have been ordered into six ascending ranks, determined by magic-user (or NPC enchanter) level.  These ranks are listed on the following table.


Council Dues
All council-registered magic-users must stay current on the Council guild fees, which are 100gp per year per current magic-user level (e.g., a 5th-level m-u pays 500gp per year to keep Council membership current).  Note that neither Apprentice- nor Adept-ranked magic-users have official Council colors, nor do these lower-level magicians need to visit the Council guildhall to level up, though they must pay Council dues.

Council Rank Advancement
Progression from Apprentice to Adept is automatic; if you reach the usual level experience-point requirements, you move up.  Once a magician reaches 9th Level, the Gray Council (Journeyman) stage, s/he must report to a Council guildhall appropriate to his/her art and undergo a ceremonial rank-advancement process.  He must do this again at levels, 13, 16 and 19 – each time he wishes to advance to the next-highest color-coded council.

An applicant for Gray through Red Council advancement must meet the following requirements:
(1) Current Council dues must be paid in full or no rank advancement will be granted.  Remember, those dues are 100gp per year per current magic-user level (that’s D&D level, NOT council “rank”).
(2) When applying for membership in the Blue, Red or White Councils, the applicant must have belonged to the preceding Council for at least six months before he will be allowed to advance to the next higher-ranking color.
(3) The rank-advancement process itself takes considerable time.  It is an academically rigorous ordeal and a highly ceremonial event, for the testers and the applicant alike.  At the Gray and Blue Council ranks, testing takes 1-4 days (rolled on 1d4 or chosen by the referee) to complete.  At the Red Council rank, one week (seven days) must be invested.  This requirement demands that the time be spent in study, rest and preparation, preferably within the walls of the guildhall itself.  The time for the test must be taken out all at once.  No studying for a day here and there, adventuring in between, and so on.  The magician comes into town, checks into the guildhall for the time required, tests and advances.

To be accepted into the White Council, the prospective candidate is charged with a quest, usually at or around the time he successfully tests into the Red Council.  He must then complete this quest to the Council’s satisfaction to be accepted into the White Council.  This quest can be anything from an extensive research project to leadership of an all-out armed expedition into dangerous, unexplored regions of the world, to seek out whatever it is the Council specifies.  (Obviously, such White Council quests can be excellent set-ups for adventure campaigns!)  There is no standardized time limit set for White Council quests.  However, the Council may well give the applicant a specific time limit: “Return here in one year with the head of a Garanthian Ice-Drake!” and so forth.

Council Colors
Every Council magician, regardless of art, is required to wear the color of his Council (gray, blue, red or white) at all times.  At official Council meetings and functions (including rank-advancement ceremonies), this means he must wear the ceremonial robe that is presented to him at the time of his successfully testing into that Council.  In the field, the rules are somewhat more lenient—a small sash, cape, or armband will do.
These are rules strictly adhered to by all Council magicians.  To violate them is to show utmost disrespect to the Council.

Forms of Address
In Council circles, the term “wizard,” “magic-user” or “magician” may be applied to any magical practitioner without fear of insult, as may the title relating to the specific art he practices, such as “enchanter” or “spellcaster.”  When addressing a Council magician by rank, it is most common to refer to the color of his Council, that is, “Red Councilwoman Lara” or “Blue Councilman Boris.”  Council magicians of ranks I and II are addressed as “apprentice” or “unranked,” as in “apprentice spellcaster Thomas” or “unranked enchanter Gondar.”  Members of the Council rarely use the other titles that correspond to the six ranks—Apprentice, Adept, Journeyman, Master, Mage, and Arch-Mage—though these may be applied more commonly amongst members of the Invisible Hand (see below).
To show deference to an older or higher ranked magician, one may use the title “magus,” usually by itself, without the person’s given name.
The term “sorcerer” or “sorceress” as applied to a wizard has taken on a pejorative meaning since the ancient days of Awra, and to call a Council magician “witch,” “warlock,” or “shaman” (a misapplication of terms that actually refer to rural alchemists and healers) is considered a grievous insult.