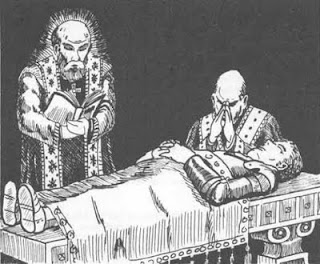 I've written in previous posts about Arandish clerics and sword-clerics, enticed you with the forthcoming elementalist class, and even mentioned a few ancient Noffellian deities, but now it is time to put forth, in broad terms, most of what I know about the principal deities worshipped in Ara.

Note that the deities discussed in this post do not constitute a comprehensive list of the available gods to be worshipped in Ara; in fact, I would personally allow clerics adventuring in Ara to follow whichever deity they choose, be it from Deities and Demigods, from this list, or even made up.  This post provides information about deities commonly worshipped in the Lands of Ara, a few of whom are culturally specific to certain kingdoms or regions (e.g., Noffel).  Adventurers in Ara can surely find temples to almost any god or worshippable thing within the walls of the Free City of Kaladar; but outside that city, full-blown temples to anything besides local deities or those entities specifically designated below are probably rare.  If an individual player wanted to make an argument for why some other deity might be widely known throughout Ara, I'd hear the argument out; but until then, I would say that while any deity may be worshipped and may provide clerics and sword-clerics with their spells, only those gods discussed below (and those I may discuss in future posts, e.g. the deities of the Mizarian people) may be assumed to be widely known or followed by any statistically significant group in the Lands of Ara.

By the way, I am a big believer in making deities / gods / goddesses a proactive part of the gaming campaign, ESPECIALLY if there are clerics in the party or involved as NPCs.  There are some very insightful comments on this subject over at Chicagowiz's old guy rpg blog.

I also like religious factional wars as story material, whether it be different temples vying for power in an urban setting like Kaladar, or a The Stand-esque end-of-the-world duke-it-out between good and evil forces that takes place in a remote, hidden evil crypt.  I specifically love the idea of the undead and the mortal races fighting it out on a grand scale -- hence the powerful necromantic vampires and Noffellian Sword-Clerics who inhabit Ara.  In fact, when Dave and I developed Crimson Blades of Ara, the homebrewed FRPG that used the Lands of Ara as its setting, we did not include a cleric or priest class (or, since CBOA was a skill-based system, I should say we did not include cleric-ing or priesting skills); we instead made the primary "religious" battle on Ara that between the undead and these badass mortal undead-fighters whom we called "palladins."  I definitely wanted to carry this palladins vs. vampires motif forward into my Labyrinth Lord conversion, but in order to avoid confusion vis-a-vis the popular AD&D "paladin" class, and because I think of our Arandish undead-fighters as being a bit closer to a priest/cleric than a fighter, I re-dubbed the old CBOA "palladins" Sword-Clerics of Frey in this, their latest iteration.

Anyway, on with the Arandish deity descriptions:

Frey
Frey, god of the mountains and iron, is the most widely worshipped deity in Noffel, and is held to be the principal deity of the Noffellians.  Noffellian clerics -- be they "regular" clerics or Sword-Clerics -- all follow Frey.  Frey has a huge (if spartan) temple in the Noffellian king’s capitol city, Highgate.

Zapar
Zapar, god of the waters, was the principal deity of ancient Noffel and may be the oldest god still actively worshipped in Ara.  Nowadays, Zapar has few bona fide clerics (if any), but he does have many witch doctors and shamans loyal to him (see “Tribal Spell Casters,” DMG p. 40), and Noffellian sailors and fisherfolk all pay their respects to the sea-god.

Minar
Minar, god of copper, was worshipped by the ancient Noffellian tribe called the Minars, who migrated to the mountainous region now called  Minoch circa Old Calendar year 171.  It is thought that the ancient Minochian culture, along with worship of Minar, vanished at the time of the unexplained Great Catastrophe of Minoch in Old Calendar year 787; most present-day Minochians either worship local village gods, are agnostic, or give reverence to Awra, the creator-sorceress.

Aldor
Aldor, goddess of the wood, is now worshipped exclusively by the Aldorian elves of northwestern Ara.  (Though some human rangers and druids privately pay their respects to Aldor when passing through certain northern Noffellian wooded areas.)

Targos and Syrna
The practice of elementalism most likely began in southern Telengard around Old Calendar year 1520, almost seven hundred years before the birth of Awra.  Elementalist practitioners believe that their powers come to them by the will of two ancient gods, Targos, god of earth and fire, and his sister Syrna, goddess of wind and water.  Worship of these deities probably originated in ancient Noffel (though they are not mentioned in any surviving texts) and came north with the
early Telengardian settlers.  The four branches of elementalism, earth, fire, wind, and water, are divided into four different sacred Orders, each somewhat removed from the other.  These Orders call themselves The Servants of Targos (earth), The Warriors of Targos (fire), The Holy Followers of Syrna (wind), and The Children of Syrna (water).  Non-elementalists, especially those living in northern Arandish lands like Telenagard, Delzar, and northern Achelon, acknowledge Syrna and Targos and pray to them occasionally, but may also revere other gods alongside them, something an elementalist would never do.  Worship of Targos and Syrna is less popular in southern Ara. 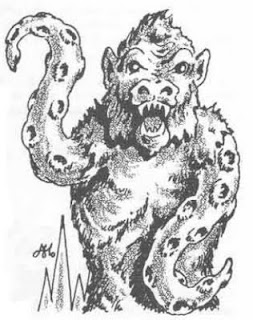 Cryonax, Elemental Prince of Cold
Cryonax
I mentioned some while ago that Cryonax (Fiend Folio p. 31) was coming to Ara.  I have always loved Cryonax -- what's not to love about an incredibly powerful yeti-thing with tentacles for arms? -- and once I started brainstorming ways to convert the Lands of Ara into old-school D&D terms, I soon hit upon the idea of creating an evil order of elementalists who worship Cryonax. Whereas the original Crimson Blades of Ara RPG only had four types of elementalists and two elementalist deities, i.e., the brother / sister team Targos and Syrna, who for the most part cooperate with each other, I thought: what if there are some Evil Cold Elementalists who worship the terrifying demigod Cryonax and fucking HATE the mamby-pamby elementalist followers of Targos and Syrna?  Wouldn't that set the stage for yet another MAJOR RELIGIOUS FACTIONAL WAR??  Huzzah!!

Awra
Awra's history has been recounted elsewhere, but she is a widely revered and worshipped figure in Ara, perhaps the most popular in all Ara.  Rodians revere her (and depict her as a Rodian), as do most human magic-users and enchanters (who depict her as human).  Many Arandish natives refer to her (in awe) as "the creator-sorceress" and fear to speak her name aloud. Awra is believed to have fought the ancient Noffellian gods, particularly Frey, sometime around Old Calendar year 2287; according to many, Awra won, dethroning the old gods, but Noffellians insist that Frey triumphed, beating Awra back and driving her out of Noffel.  In any case, Awra is called “the arch-sorceress” or simply “the witch” in most areas of Noffel, and is despised by almost all Noffellians.  She is widely believed to have given up her human form long ago, and now mainly roams Ara (when she does at all) in gold dragon form.

Here are the gaming stats for Awra when she appears as a gold dragon:

Other Deities
Besides the various deities listed above, ancient dragons -- especially particularly powerful dragons like Krakko -- are often worshipped in Ara by so-called Dragon Priests and their followers.  Of course, demons are often worshipped as well, as are local gods and spirits of the forest etc.