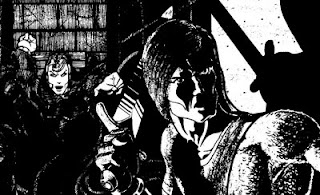 The Sword-Clerics of Frey are an elite organization dedicated to the discovery and eradication of the undead, especially vampires, in Ara.  While arcane magic is generally forbidden in Noffel, clerics loyal to the ancient Noffellian gods—Zapar, Minar, and even Aldor—have proliferated since the earliest days of the Noffellian Kingdom.  The Sword-Clerics of Frey are a specialized group founded in the latter days of the Old War between Telengard and Achelon; its original members were Noffellian Frey-worshipers trained to use special enchanted iron swords to drive off and destroy the undead beings created by Telengardian Necromancers.

The Sword-Clerics have always done their job well.  However, no one could have predicted how quickly and how far abroad the living dead would spread their seed.  Today, twelve and a half centuries later, the Sword-Clerics of Frey continue their struggle against the Arandish undead.  Their ultimate aim is to find and eliminate every Arandish vampire (Necromancer) in existence.

Relative to a standard cleric, a sword-cleric of Frey functions at +1 to current level for undead-turning purposes and at -1 to level for cleric spell acquisition. For example, a 6th-Level sword-cleric turns undead as effectively as a 7th-Level cleric, but acquires spells at the same rate as a 5th-Level cleric. A 1st Level Sword-Cleric turns undead as if he were a 2nd Level Cleric, but gets no Cleric spells at 1st level! Furthermore, even at 14th Level, the Sword-Cleric of Frey will never gain access to 7th-Level Cleric spells.

Upon attaining second level, a Sword-Cleric of Frey must take Detect Undead, a special first-level spell described below, as his first (and only) level one spell.

Sword-Clerics of Frey are permitted to use just one type of edged weapon, a specially blessed long sword provided by their Order. Sword-Clerics are NOT permitted to use any other swords or edged weapons, be they mundane or magical; NOR are they allowed to use their blessed swords upon any creatures or monsters EXCEPT the undead.  That is, sword-clerics are ONLY allowed to use the specially blessed swords provided by their Order, and only upon undead targets.  [Note: Thanks to A Paladin in Citadel for suggesting this latter amendment.]

Blessed Sword Powers
Note that the sword-cleric must be holding / wielding / in physical contact with his/her blessed sword to use any of its powers.

Level 4
Sword does double damage to zombies, skeletons, and ghouls.

Level 7
Life Force Cloaking: the sword empowers the sword-cleric to cloak his Life Force emanations, making him effectively invisible to the undead for 1d6 minutes.  Usable thrice per day.

Level 13
Entrap Vampire: the sword enables the sword-cleric to entrap one vampire in its current form, effectively neutralizing its shape change ability (see LL p. 101).  Range: 100' and in sight; Duration: 1d12 rounds.  Usable once per day.

The Citadel of Frey
The Citadel of Frey lies north of Noffel in the foothills of the Frey Mountains, near the eastern edge of the Great Western Swamp.
A Sword-Cleric of Frey must return to the Citadel to unlock each new sword-related power, i.e., at Levels 2, 4, 7, 9, 11, and 13.

New Spell:
Detect Undead
Level: 1 (Sword-Cleric Spell)
Duration: 6 turns
Range: 1 mile
The caster can sense the presence of the undead within 1 mile.  Note that the spell does not allow the Sword-Cleric to detect evil intent [see Detect Evil in LL p. 22] nor read minds.  It only tells the Sword-Cleric if there are undead beings about, and if so, in roughly what numbers and to what level of power (gauged by the undead creatures' HD).

New Spell:
Bless Sword
Level: 6 (Sword-Cleric Spell) [Grand Avatar of Frey only]
Duration: permanent
Range: touch
The Grand Avatar of Frey, the sole 14th Level Sword-Cleric in Ara, is the only individual empowered by the god Frey to enchant the Blessed Swords used by the Sword-Clerics of the Order.  Bless Sword is the spell s/he uses to grant each new sword-power at Sword-Cleric Levels 2, 4, 7, 9, 11, and 13.  These enchantments are always done in high ceremonial fashion at the Citadel of Frey.