Review: The Call of Cthulhu and Other Weird Stories 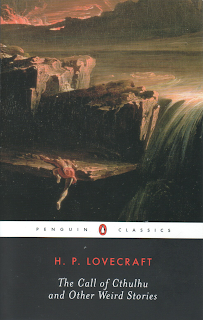 I recently finished reading the Penguin Classics H.P. Lovecraft anthology The Call of Cthulhu and Other Weird Stories, edited by S.T Joshi.  I am now totally HOOKED on Lovecraft!  Not only are his stories every bit as creepy and horrifying as I always hoped they would be, but HPL's command of written English is nothing short of dazzling.  His prose manages to be just rich enough to paint a convincing picture of (creepy) set and (uncanny) setting without stepping over the line into overwrought "purple prose" a la many of Tolkien's descriptive passages or even our own beloved EGG.  In short, I find HPL's language to be as evocative as Tolkien's but, at the same time, vastly more concise.  This tendency not to waste words probably goes hand-in-hand with Lovecraft's adherence to and mastery of the short story form.

This particular HPL collection includes the following stories, all rigorously annotated by Joshi:

All this plus a historical / critical introduction by Joshi.

I won't address every included story, but will merely highlight some of my favorites.

By far my top pick is "The Colour Out of Space" -- even now, a few weeks after finishing the anthology, it is the image of that lonely Gardner farmhouse (and what lurked in its well, and what it did to those family members) that I remember most vividly. While one might expect that the titular story, "The Call of Cthulhu," might be the standout or most representative tale herein, I actually found "Cthulhu" a bit too diffuse to be as effective as some of the others: there were a couple memorable episodes, like the ritual in the New Orleans swamp and the final harrowing boat confrontation with the awakened god, but "Cthulhu" did not stick with me in the same way that "The Color Out of Space" did. I would even nominate "Innsmouth," "Herbert West," "Arthur Jermyn," and "The Haunter of the Dark" as being more impactful (for me) than the title story.

But HPL stories are like sex or pizza -- even when they're not the greatest, they're still pretty damn good. There is not a story in this collection that didn't leave a lasting strange image or dark emotion impressed upon me in its wake, except perhaps the somewhat obscure "Nylarthotep."

After "The Colour Out of Space," the next most memorable story for me was "The Shadow Over Innsmouth" and here I must acknowledge the intelligent editorial work of S.T. Joshi. Joshi's story selections here synergize well with each other. For example, "Innsmouth" could be seen as a logical extension / elaboration of the fish-god / fish-race concept from "Dagon," and similarly there is a resonance between, say, "He" and "The Haunter of the Dark" (both of which feature city-bound flaneurs who find more than they bargain for) or "Randolph Carter" and "Rats in the Walls" (both of which describe misguided and doomed crypt delves).

Speaking of crypts, allow me to single out those stories that speak to the DM in me: "Randolph Carter," "The Outsider," "The Rats in the Walls," and "The Festival." The first three all involve underground crypts of some kind, "The Outsider" being the most dynamic, weird, and unexpected of these. And "The Festival," besides resonating nicely with my general dislike of modern-day Xmas celebrations, features one of the spookiest underground caves I've ever read about. Great fodder for scary megadungeon levels!

(Okay, for you list-o-holics, my fourth-place pick is "Haunter in the Dark," followed closely by "Herbert West" in fifth place. Also high up there are "Cool Air" and "Dagon." I LOVED the first three-quarters of "The Whisperer in Darkness" -- seemingly a nice companion piece to "Colour" -- but thought that it kind of fizzled at the end.)

All in all, then, this collection is a GREAT value at only $10.29 (brand new) on amazon.com. Joshi's introduction, which mostly charted HPL's biography but also offered a few non-spoilerish critical comments about the stories, was immensely helpful to me as a first-time HPL reader.  I appreciated many of Joshi's annotations as well -- though beware, his endnotes contain spoilers!

As a result of this highly positive first foray into the darkly wonderful world of Lovecraft, just this week I've started into the next Joshi-edited HPL collection from Penguin Classics, The Thing on the Doorstep and Other Weird Stories. I will be sure to let you know how that turns out in a future review.