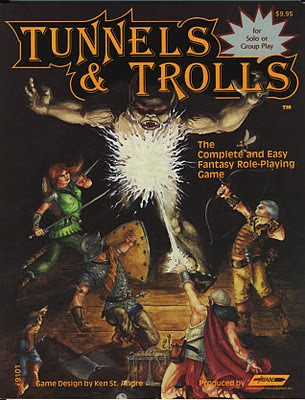 I just picked up my mail to find that my new copy of Tunnels and Trolls (Edition 5.5) has arrived from Flying Buffalo!  I can hardly wait to open up the box and start traveling back in time through some of my earliest RPG'ing memories.

As I've explained before, I started out with Holmes Basic D&D in 4th or 5th grade, and swiftly became aware of AD&D, grafting stuff from the Players Handbook and Monster Manual onto a Holmesian style D&D.  But in 6th grade I met Michael Oshiro, a highly intelligent, articulate, and humorous fellow who insisted that D&D was for pretentious idiots and that T&T was THE TRUE WAY.  (I think Mike O. actually played both games, but he was a forceful rhetorician and wanted to drive home to me the point that D&D wasn't the only game in town.)

So I played many sessions of T&T with Mike and some other classmates -- in the school library at recess, as I recall -- and I really enjoyed it.  The lighter tone of the game suited Mike's terrific, dark sense of humor (and spoke to my own Pythonesque leanings), and we shared many great hours playing T&T in the library conference room at Wellington Elementary School.  I think T&T's relative simplicity (particularly in chargen) made it an easier game to set up and play quickly at recess-times, and we players did not get quite so attached to / wrapped up in our characters as we did when playing D&D --  a good thing since Mike was a "killer DM" who took great sadistic pleasure in killing PCs and parties.  A harsh (if hilarious) taskmaster was Michael Oshiro.

In short, I can't wait to refresh my memories of this great game by perusing the rules this coming weekend -- and I hope I get the opportunity to play it soon as well, either with Tenkar or via some other scheme of my own devising.

Take That, You Fiend!