A Review of Our d30 House-Rule, One Year Later 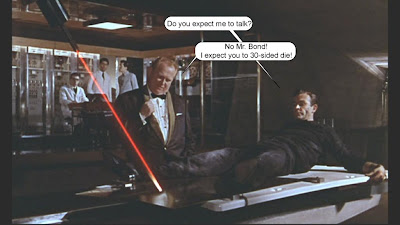 And on that subject one Spawn did say:

As Carter* mentioned our Ara Campaign just passed its first anniversary, and we’re looking back on some game features and goings-on to see what we’ve been through, what has worked or hasn’t (or wasn’t used), and generally reflecting on things. One of the more powerful and interesting house-rules that Carter devised for this campaign is the “d30 rule”:

Once per session each player may opt to roll the referee’s d30 in lieu of whatever die or dice the situation normally calls for. The choice to roll the d30 must be made before any actual rolling has occurred. The d30 cannot be rolled for generating character statistics or hit points.

Pretty cool. Also pretty generous. I wonder how many DMs out there would give this to their players? I did note the other day that Michael Curtis posted cards that he rewards good players with that allow them to replace a d20 (to hit or save) roll with a d30. Clearly this makes some nearly impossible attacks possible (say, if you need an 18 to hit, the chance of success goes from 15% to 40%). But replacing any roll is way more potent, and as we will see our party has gotten pretty savvy with the d30.

Before getting to the data, let me note that: ROLLING A D30 IS FUN. As PCs we spend the whole 4-hour session with that roll in the back of our minds, usually trying to save it for when it’s really needed, and this (I think anyway) raises awareness both tactically and strategically, which is good for game play. It also makes us think of new ways to use it, which fosters closer readings of the rules and better understanding of game mechanics, even if it’s just to get an edge. But ultimately, d30 dice feel good to roll. They’re big, they roll well, are indecisive as they come to a stop, and to quote Mr. Goldfinger, they have a Divine Heaviness! Bitchin’. 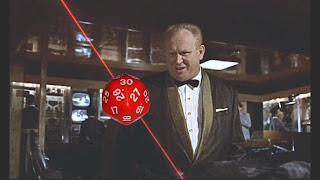 Results: So with Carter in town last weekend we gathered what data we had on the use of the d30 for the last year, which is tabulated below by session. 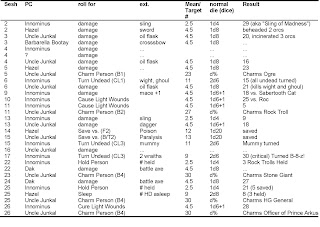 This data is not complete, but is probably fairly representative of d30 use over the last year. (I also had grandiose fantasies about plotting this out in Tufte-esque clarity, but I, like several of you, have a f#%$ing dissertation to write.) The most striking feature is that while the first 8 uses are to replace damage rolls, after Uncle Junkal’s first use of it to charm an Ogre the play becomes more dynamic. As Bard-1 (using Brave Halfling's Bard), UJ turned a ~1 in 4 chance of success into a 2 in 3 chance of success. Unfortunately the ogre was immediately killed by a needle trap in a doorknob, but it indicated the potential for the d30. I believe UJ’s player had been studying this very closely, waiting for the opportunity to pull this off. It has been used several time since, so that now the party has a “sonofabitching Rock Troll” (to quote Carter) as a deadly and reliable member (from Session 11).

Inspired by that, I (in the form of Innominus the Follower of Endra, a Cleric) then replaced the d30 to roll for Turning Undead, and a few sessions later applied it to the damage roll for Cause Light Wounds. That means Cleric-1 can grab a fool and without rolling to hit deliver some serious wrath of their deity. This helped against a Roc and some other undocumented wilderness random encounter. After that, more Turning Undead, notably 2 Wraiths that were after UJ for a Death Frost Doom artifact who got critically turned on a natural 30 in Session 17 (my notes say “Super-turned like a cheap trick! It hurts!”).

A few saves were also made in Stonehell by Hazel and UJ, and when losing the roll may have meant death, the d30 calls to you. But the d30 tour de force was pulled off by Hazel casting Sleep and Innominus casting Hold Person under an invisibility cloak with d30 for HD and number affected, respectively, in the midst of a hobgoblin encampment. 19 of about 40 enemies were knocked out before blood was shed. We accomplished our mission with panache and were flipping the bird at foes like the gesture was going out of style.

Analysis: It could be that rolls for d30 weapon damage were recorded less often as time went on, and are under-represented in the table, but I don’t think that explains the shift (generally) away from using the d30 for weapon damage after about Session 6. For low-level PCs that have other abilities (spells, charming, etc) or that need help with saving throws, the d30 roll is where, essentially, miracles can happen. When Innominus grabs the Roc that shredded yet another NPC to bits and delivers 25 HP of Cause Light Wounds wrath, that’s divine intervention. The Saves vs. Poison or Paralysis are the same thing. We don’t talk about it that way, but the idea is there’s something or someone looking out for you, giving you a break. Do with that what you will as far as campaign cosmology and world view.

The other thing of note, going back to Mr. Curtis’ reward cards, is that we have no record of anyone choosing to use the d30 to hit. I recall in the early session we debated whether to use the d30 to hit or for damage, and the greater upside for more damage prevailed (e.g., you could hit with a 29 and still end up doing 1HP damage on a crappy roll ... better to not waste the d30 on that, because you’re always going to have another chance to hit in most combats). I would guess that most of Mr. Curtis' chits have been turned in for saving throws.

And finally, I’ll point out that there are many sessions where PCs don’t use their d30 roll, sometimes because we’re in town, but in dungeons often PCs hold it back so long that there’s never an opportunity to use it. Carter himself probably went for 2-3 months forgetting to roll his d30.

Conclusion: I love the d30. I’ve always wanted it to be one of the active, central dice of D&D. I stole one of the first d30s I ever saw from a store in a mall back in the day in 1983 or 1984. I probably could have bought it, but I didn’t. It was too awesome for me to leave and go back home to get the money for it. I wanted it at that moment. And so it became mine. Now I eschew petty theft, but my passion for the d30 remains. I really like this house-rule, personally, because it has many unintended consequences and their results elucidate game mechanics. The punishing (or austere) DM won’t want this, or will start throwing deadlier foes at the PCs (Carter’s approach recently). But the DM that likes to give out some FUN with the potential for total failure might get ready to roll with the d30.

*Many thanks to Carter Soles himself for getting me these screen-caps. He is the real Bond expert here.