Where’s Our ELP? An Outline for a Destined-to-be-Classic Campaign Setting...

... inspired by (or derived from) the music of Emerson, Lake and Palmer.

The Spawn of Endra says: I shit you not. 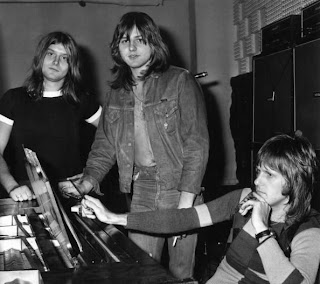 I read ChicagoWiz’s post of last week and at first was stumped: “Our EPT”? ... Emerson Palmer and ...? Emerson .... “Oh, Empire of the Petal Throne,” I realized. “There’s something I know fuck-all about.” And so I immediately posted several grumbly-assed comments here and there about liking the derivative game I play (with which I still abide).

But before that a few posts got me thinking (unintentionally) about Emerson, Lake, and Palmer, to wit those mentioning Baba Yaga’s Hut as a 1e magic item, and Baba Yaga herself, e.g., where Mandy and Zak were talking about Baba Yaga as an NPC in her game. That got me thinking about making borscht for our game group (folks liked it; if you use this recipe you should add 2-3 cloves garlic, and probably puree before serving). For me, Baba Yaga brings up Mussorgsky’s “Pictures at an Exhibition” (in the form of “The House on Fowl’s Legs”) and of course ELP’s live album of the same name from 1972. So then I thought, could I make up a campaign setting in the Lands of Ara (but probably on a different continent than Ara, or on a different planet in the Ara universe) using material from ELP? I’ve never done world-building before, maybe I’ll see what happens. And either way, I have a feeling that ELP is not a source that I’m going to be fighting over with anybody else, so I don’t envision any intellectual property theft happening here.

So in a series of posts, I’ll go through their albums up to Brain Salad Surgery and see what I can pull out of them in terms of settings, monsters, magic items, etc., for a mostly Lab Lord campaign, though I can already tell there will be some Mutant Future overlap (maybe even Boot Hill! Egads!).

An biographical aside: I had a weird fascination with ELP since late high school, when I found their third studio LP Trilogy in a bin at a thrift store, heard snippits of “Karn Evil 9 (1st Impression)” on newly spawned classic rock radio in Fresno, and of course was beaten over the head with “Lucky Man”. Well, there was something in ELP’s music that intrigued me, and so, after getting some of their re-released boxed stuff in early college, when Rhino re-released their albums in CD form in the 2000s I started acquiring them in hopes of unearthing something really epic and grandiose. That is, a hugeness of vision that had been suggested by the bits I had heard. Ultimately, after lots of listenings to ELP (but only up to Brain Salad Surgery, I’ll add), I now know empirically it simply is not there. So don’t bother telling me how disgustingly rotten they are. I know better than most precisely how and why they are as bad as they are, because I gave them some hard dedicated listening, with every benefit of the doubt I could muster hoping for a miracle. Not many people can say that (or will admit it if they have).

Anyway, we’ll start with their eponymous first album. The cover gives us some DIY art that should give a segment of the OSR a boner just because it’s not particularly well-executed. A visible-brained man apparently meditating or sleeping, and a dove emerging from his mind. 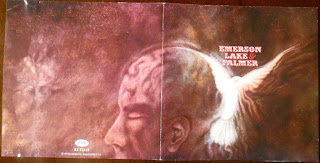 The entire continent or planet is or may be the product of a dreaming god/beast/madman and the PCs don’t know this but may begin to deduce it as they work their way through the world. Um, derivative. Could be Lovecraft, Hinduism, Gnosticism, or all the P.K. Dick I’ve been reading. Sorry, I suck. Let’s say: He actually does exist in Ara held in a magical coma. He has no skull because a demon he summoned told him it needed to be removed so his mind-powers could directly affect the universe. He’s in a tower in some remote part of the continent. My entire ELP setting is his first serious messing-with-the-fabric-of-realities cosmic experiment.

Track 1: The Barbarian. Here Emerson tacks some plodding not-that-ominous-sounding stuff on to the front and back of a Bartok piano piece (Allegro Barbaro). I like a barbarian, maybe one that hangs around a mountain pass fighting people from all directions. Since he’s been up there for a really long time the two valleys below have been out of contact with each other for centuries. He’s a long-lived barbarian, we’ll say. I don’t have any stats, but luckily Talysman posted this yesterday, and I’ll go for the stronger version. His name is Throwgrak.

Track 2: Take a Pebble. At 12:27 long, it’s surprising there’s not much to work with here. Dreary stuff ... maybe this is a very stupid idea for a series of posts. Well, the main image is throwing a pebble into the sea, “disturbing the waters of our lives”. Something about memories not being real. Photographs scattered on your fields. Ugh! Too much incomplete and disjointed imagery in this “song”. I give up. There’s a short hillbilly jam in the middle. Maybe there’s a race of hillbillies in this world (please Talysman, do a post statting up a hillbilly race for me [Update: Ask and ye shall receive!]... or Carter you must have this covered already somewhere?).

Track 3: Knife-Edge. Okay, this song seems to lay out a scenario for a city viewed from some high tower by a king (or by kings flying on silver wings), full of madness, a road through an abbess (or abyss? trying to rhyme with madness), spectres on the city streets, “patient queues for the gallows sing the praises of the hallowed / our machines feed the furnace, if they take us they will burn us!” (not bad lyrics for Lake, honestly). Then throw in a Janacek organ piece for no reason. “When the flames have their season, will you hold to your reason? Can you still keep your balance. Can you live on a knife-edge?” Wow this post is long. More on Knife-Edge City in another post, but I think it’s a pretty messed up undead-filled human sacrifice place! Yay ELP!

Track 4: The Three Fates. A classic Emerson ultra-repetitive keyboard showpiece in three parts: Clotho, Lachesis, and Atropos. I’m partial to the Norns, myself, or even some MacBeth-ish three witches from Polanski’s film version. 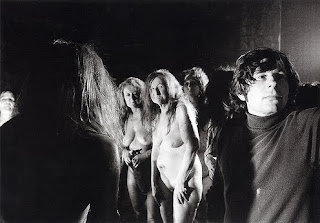 Maybe I’ll plunk them out on some barren moors in this world. Derivative, yes, but I’m new at this, cut me some slack. They do witchy things, and I’d like to make them an important source of info and power for PCs on quests. Maybe something like Ningauble and Sheelba in the Lankhmar stories. Or if I had a totally pointless and tedious tricks-and-traps dungeon that both bored players to death and killed their characters, this is the background music I’d be playing.

Track 5: Tank. Carl Palmer’s obligatory drum solo track. I’m a drummer, and I used to study such classic solos as Toad, Moby Dick, and so on (leaving Buddy Rich’s Hawaiian War Chant completely out of this) and I can say, Tank is a dud. I guess Palmer’s a fast drummer, that’s how he was trying to distinguish himself (his one interesting idiosyncrasy is damping crash cymbals after long fills, to his credit). But he’s mostly incapable of creating any real color. Anyway, okay, Tank. It’s the card I dealt myself.

In the lowest sub-level in a megadungeon there’s a huge copper tank. All the excretions of all the humanoid monsters in the dungeon are channeled through conduits passing through every level and end up in this tank. In it they ferment and generate methane gas that the BOSS of the megadungeon or somebody (or everybody) uses to drive steam-powered mechanisms, lamps, flamethrowers, what-have-you. Also, there are special sewage tank creatures that have evolved in the tank through the interventions of some twisted magic-user in the dungeon. If the megadungeon is somewhat past its glory days, the tank will be corroded and weakened in ways not obvious to PCs. Attempts to manipulate valves, hatches, climb its ladder, etc., will cause it to fail catastrophically, deluging all PCs in the tankroom in sewage. Then the sewage creatures swarm on to them (more on them in a later post). Not bad. Probably the best we’ll get out of Carl Palmer until Brain Salad Surgery.

Track 6: Lucky Man. Oh that masterstroke of irony and poetic justice in the form of an innocuous rock ballad! If you go with it straight-ahead, it’s a boring story about a rich prince getting killed in a war, and boy, by the end of it: You see how he really wasn’t so lucky after all! Zing! Ouch! You got me Greg Lake! You’re so heavy that I need to take more bong rips so I can take in all the implications! What actually appeals to me about this song is the guitar solo that sounds like bagpipes (oh hell, I see the next series of posts: D&D inspired by Tubular Bells!) and the weird Moog solo on the fade-out, because when I first heard that I thought “Hell, if these guys are brave enough to just put that crazy-sounding stuff on their first single, then they must have some really crazy stuff on the albums”. And partly yes, partly no. In fact, they just had no taste ... they probably couldn’t tell what they were doing, and so it’s unclear if this was bravery or not. Sometimes no taste breaks towards the interesting (John Waters) and sometimes it breaks towards the lame (here’s a cheap-shot: FATAL).

Anyway bagpipes = highlanders and Moog = spaceships so I’ll say there once was a war in another set of mountains (not near Throwgrak’s Pass) where a bunch of Celtic-oid, but not really Celtic-oid, tribes fought a musical deathmatch with an alien advance team. This is the opposite of the outcome of Close Encounters. The Celtoids quickly learned that their bagpipes produced vibrations at harmonic frequencies that disintegrated the brain-sacs of the alien invaders, and were able to destroy them all and commandeer their ship. Through what little of the technology they could comprehend, their civilization advanced in the mountains unbeknownst to anyone else. As the technology advanced, so did their sonic aptitude, so that Celtoids could all produce multiple pitches simultaneously through throat-singing, and a select group of monks eventually mastered a vocal sonic attack that tears apart humanoid organs when focused on an opponent. There’s a Hawkwind/Michael Moorcock reference in that, as well. Guess I’ll need to figure out who the Celtoids really are now.

Damn, that was work! I listened to that album twice to write that. Next up is the dreaded sub-concept album Tarkus. Break out your Gamma World / Mutant Future books, friends: cyborg armadillos, cyborg pterodactyls, and a manticore. Sorry detractors, but ELP is Old School, and I don’t care how much it hurts to admit that.