Once, a planet aligned, and then Thine Spawn of Endra said:

(How interesting. When you google 'stockings dungeon', Sasha Grey shows up in the top 3, with no reference to DnDw/PS. Searching that for images-only produces a surprisingly restricted range of results. Here's what I was looking for -- Mistretta-approved dungeon stockings ... not that we're on his blog list anyway:)* 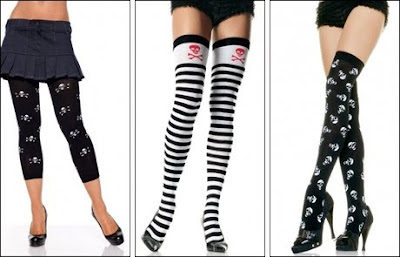 Carter, towards the end of what sounded like a solid day of being old-school productive, emailed me last evening to ask about what the Moldvay/Cook books say about random dungeon stocking. He was trying to remember who was praising the B/X books and the d6 tables (it was Michael Curtis, he later recalled) rather than LL’s d% format, and could I summarize them from my Nag Hammadi Edition B/X hardcopies? Well I took some photos and sent them east. 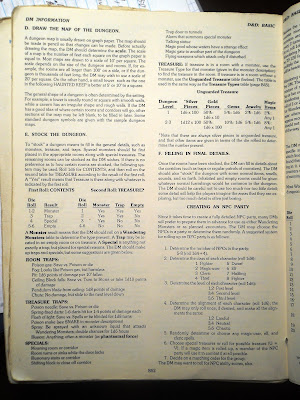 The contents and treasure rolls are d6, but there are percentile rolls for unguarded treasure. This is not much different than the LL mechanic overall. There's an interesting explanatory note in Moldvay that "there are always silver pieces in unguarded treasure". (WHY? Fuck, explaining that would lead to an epic campaign setting in its own right). The tables are all the same in the Expert rules, except they cover up to Level 8+ of a dungeon, and that note isn't there (though the fact that you don't roll for SP if unguarded treasure is present is still there).

For monsters this then refers to d20 Wandering Monster tables in each book. This is nearly the same as in LL, except for LL you have to go back 20 pages to get to that table (which covers up to level 8+ in that single table). For both Moldvay and Cook, the Wandering Monster sections and their tables follow on the next pages, and they are broken out by level (or by every two levels in Cook) in a series of tables that include the # appearing and all the basic stats, which is nice since you don't have to then go back into the monsters section to figure that stuff out. Here's an example: 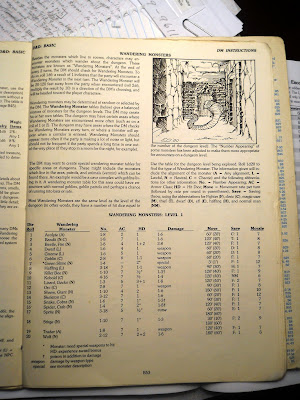 For dungeon stocking at your leisure maybe this isn't such a big deal, but for routine Wandering Monster checks, you've got the results and the info to use them right there. Just another example of how efficiently the B/X rules books are laid out. And also it shows what Dan Proctor was up against trying to combine B and X in one book, i.e., LL. His single Wandering Monster 1/2 page table covers all the way up to L8+, instead of the combined 3 1/2 pages between Moldvay and Cook, but without all of that crunchy useful detail, which is a a trade-off. Hmm. The overall page count is actually higher for LL than B and X combined, 135 of content, vs 128 (2 64-page books, including frontispieces and all that stuff).

Now here’s the layout critique: The B/X mechanics for stocking a dungeon are on a single page in each book (and there are later pages devoted to examples), whereas the LL rules drag a similar 1-page worth of material across two pages that don't face each other, which make them harder to use. None of this is to say that "Dan Proctor sucks and I'm not going to play his shitty game with his shitty rulebooks anymore". Far from it, I keep buying his stuff whenever I can. And I’m playing Lab Lord, not B/X.

What it draws into sharp focus for me is how skillfully the B/X books were conceived, and what attention to layout was devoted to those two books. And also what money and resources must have been devoted to it. That is, those two 64-page books were done High-end, pro. Perhaps that is the ‘corporate’ level of attention devoted to product design, I don’t know. But some human being said: Okay 'Dungeon Stocking' needs to be covered succinctly on two columns of a single page, and the relevant tables need to be close to them. That has to occur while 50+ other specific layout issues are in play. And this is a level of layout design sophistication is not seen in the 1e DMG, which to me follows an incomprehensible logic of layout (clue me in if anyone has cracked the code, please).

At the end of the day, in trying to understand how B/X works vs. how Lab Lord works, this is another example that shows me that B/X was/is a fully separate game guided by different mechanics than AD&D (leaving LL aside completely). And I suppose this is one of the elements (as part of the general production quality with all those little Erol Otus, Bill Willingham et al. pieces) that helps explain part of its success at the time. It’s not just the system or the marketing of the imagined universe that matter. Without clarity in the exposition, all of that genius is strangled. Clarity rarely happens by accident, it usually occurs by design.

(And Intelligent Design adherents can pre-emptively stab themselves in the face with a dull rusty fork 45 times before commenting that there is “clarity” in the design of the universe or society or any other such nonsense. Any honest look at the state of things tells us that few things are clear by their nature.)

* Dear Reader, please note that the ":)" there is not a happy-face emoticon, it results from the use of conventional punctuation rules for parenthetical statements.