The other day a “Silly Question” was asked over on The Yaqqothl Grimoire about what fonts might be used for an OD&D Supplement:

As I commented, to me this is not a silly question at all. Fonts evoke a lot of feelings for some folks. [Here is a nice little reference if you aren’t familiar with the font names I’m going to be talking about.] In my work, which mainly involves scientific writing, editors want manuscripts set in Times New Roman for text and Arial (or Verdana for Mac users of Excel) for figures and tables. So for me when I see those I think: ‘Oh, a manuscript I’ve been writing or one I have to peer-review, better get ready to wade through this. I hope this person can write.’ (And ‘this person’ can refer to me on any given paper.) On the other hand, when I see Souvenir (as in the Lab Lord books) I think: ‘Oh, B/X! Keep on the Borderlands! Yay!’ That’s what a font can do. Searching for a new non-Helvetica based sans-serif, I started using Futura Medium for my own reference sheets. Once I got my 1e DMG back, I realized it was set in Futura too: It’s like my default setting is to be as Old School as hell! Righteous! Fun is on the way!

The choice to make Lab Lord in Souvenir is obviously a very shrewd one on (I assume) Dan Proctor’s part, and is the same evocation Mr. Yaqqothl is trying to take advantage of. The trick is that of course fonts get used in diverse contexts, so the signal can get crossed in unexpected ways. Here’s one example that hit me again when I got my old B/X books back over the holidays. Back in the last few months of my senior year in high school, a band called Jane’s Addiction released Ritual de lo Habitual, an album that promised to be epic.

But there was controversy! The album cover had a papier-maché sculpture of two women and a man in bed, and you could see papier-maché tits and part of a papier-maché cock! It could not be sold in stores in America or family values would be perverted! (For my beloved younger readers, this was the first Bush era. Respect your elders, we’ve been through some hairy shit.) So Jane’s Addiction released an alternative cover so they could get their music into K-Mart, Walmart, etc. And this, a blank white field with the band name in Quentin EF, the title and the text of the First Amendment to the Constitution (not sic Article 1, sorry Perry Farrell) is what they released: 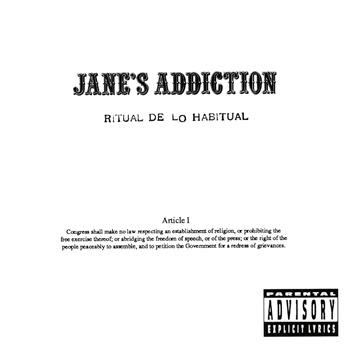 Because this was too damaging to American reality: 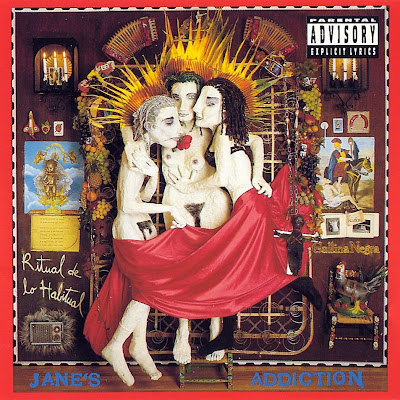 And the “clean” version is the first one I saw, though I had heard the album for weeks before then. When I saw it I thought: Basic D&D? Is that supposed to be ... why D&D? It’s not a D&D album ... is it? Eric Avery plays D&D? Dave Navarro, sure, but ...? What? Luckily now if I think about the album I think of the other cover, and don’t get bogged down in this anymore, but I still find it disorienting. Why did they choose a D&D font?!? If anyone of the era looked at that and didn’t think D&D, please let me know. And if anyone knows why they settled on Quentin EF, please tell me!

I was going to go on about Helvetica, the source font for Arial, with respect to Mr. Yaqqothl’s project, but you should just watch the doco, Helvetica. It looks like he’s evoking the LBBs with the Chisel D titles, which is nice. His project is looking pretty good to me so far, and maybe TNR doesn’t affect it one way or the other for most folks. Maybe I should just get over it. Either way, I’m glad he asked the font question. It bodes well for the design of his project. As does flipping out on Mr. Raggi.