Particularly now that the Arandish Campaign has hit that "sweet spot" where all the PCs are 3rd level or higher, and therefore the "domain-level game" begins to hove ever so tentatively into view, I feel it is time to actively deploy this terrific Entourage-Based Retainer system that I have horked wholesale from Dave "Sham" Bowman.

But first, a few key henchman-related definitions, adapted from Labyrinth Lord pp. 46-49 and Rob of the North's recent Grognardia comment:

1. Hireling. A 'normal man' (usually 0-level) hired to perform a specific task. This category includes porters, torch-bearers, stable boys, and/or mercenaries and specialists. Hirelings and specialists do NOT accompany PCs into dungeons, though they will guard stuff in camp or at home.

2. Henchman/Retainer. An NPC (classed character) who is a member of your party, serving for pay or other motivations. This type, called a "Retainer" in LL terms, is a henchman-level Entourage member in our terms but not (yet) a Loyal Follower (see below). I will use the terms "henchman" and "retainer" interchangeably for this type, even though LL pp. 46-47 refers to them specifically as "retainers." 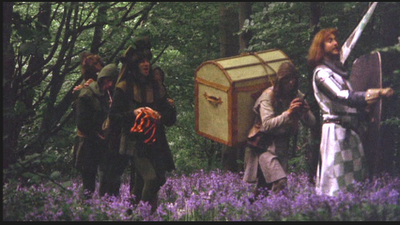 At the beginning of each session, the player decides who from amongst his Entourage is going on this particular adventure. Typically, either the Primary Character or the Loyal Follower must be present during an adventure. Some of the members of the Entourage might stay behind to tend to matters at home while their brethren assume the dangerous duties of adventuring. Later in the campaign, the players might decide to attempt an adventure which is surely beneath their Primary Character’s or even Loyal Follower’s level of expertise. In such a case, the player can opt to play an adventure using the Henchmen members of their Entourage. Temporary Primary Characters will have to be established during those adventures.

Experience is affected by the number of characters, obviously, so it is not always the best idea to tackle an adventure with three dozen members. Primary Characters receive one full share of divided experience, Loyal Followers and Henchmen receive but one-half a full PC share of experience and treasure.

If a Loyal Follower or any other member of an Entourage attains an experience level higher than the Primary Character’s, he or she will leave the Entourage (and possibly establish his own and continue adventuring, at the player’s option).

The alignment of a henchman / retainer should be compatible with that of the Primary PC s/he serves. Difference in alignment will certainly affect the loyalty / morale of henchmen, if alignment is radically different.

Morale is an important game feature when using the Entourage Approach. Henchmen can be fairly transient, but eventually, each Entourage will consist of some very loyal members, even at the henchman / retainer level. The Labyrinth Lord rules shall be followed each time a new retainer is added.

To begin with, the Reaction Table on LL p. 46 is used during the hiring process. There is a possibility that said retainer will end up with +1 Morale Bonus (result "2" on the Reaction Table) at this stage. The henchman's base morale level is determined by the Primary PC's CHA score (see LL p. 7), adjusted for amount of gold offered (at DM's discretion) and possibly that +1 from the Reaction Table.

Retainer Morale should be checked during particularly perilous situations, and at the conclusion of each adventure to see if the Henchman remains in the Entourage. Fair treatment and fair pay, especially over multiple adventures, will often mean that no check is required (DM's discretion). Henchmen who have witnessed their mates perish, or come to within a breath of their own demise, will normally have to check with a penalty. Additional gold and Gems can help to convince even the most reluctant Henchmen, though.

Under certain circumstances, a player with available space within his entourage can actually add intelligent Monsters to his Entourage on a temporary or even permanent basis, given that said Monster can be accepted by his Henchmen mates, and further by those members of society whom might have to accept said Monster!

The process of actually attracting and maintaining a successful Entourage will be a large part of campaign play.  A player is never required to bring members of his Entourage on adventures, but the benefits of maintaining a Loyal Follower, at the least, are clear.

As "Sham" notes, the Entourage Approach has been inspired from notes by Mike Mornard, in regard to how Gary Gygax handled his campaign back in the early days, to quote:

Usually, only about 2 to 5 of us could make it any given game day.

So, everybody acquired henchmen to "fill out the group" if somebody wasn't going to be there.

And it didn't take long for players to start arranging other times and playing alone or with henchmen.

Heck, it even reached the point where from time to time we'd just play our henchmen to level them up.

And yes, the original D&D assumed an endgame where you would build your stronghold, acquire vassals and tenants, and become A Major Player In The World's Politics.

That endgame seems to have virtually disappeared.”

With the Arandish Entourage System, I hope to bring back that end game that has virtually disappeared. We’ll see how it goes!

[Thanks to Dave "Sham" Bowman for posting this and to Chris of Vaults of Nagoh for helping me find the post again!]