The Spawn appeals to the OSR: 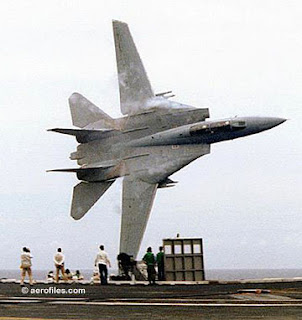 The current turmoil in Libya has brought that country and Gaddafi back onto my radar in a way it hasn't been since the Reagan era, when we used to bomb them mysteriously and they used to bomb everybody else mysteriously. This was back when I was in junior high, and most of my friends were gaming. I remember shortly after one of the raids on Libya that involved F-14 Tomcats (my favorite fighter at the time, because the wings could move ... pretty awesome to a 12 year-old ), that one of my friends had the FASA Star Trek game (I think ... could have been something else spacey) and there was a section that had a bunch of 1 paragraph scenarios or skirmishes or maybe it was a chronology of battles.

One of these was called some thing like "Tomcats over Leeb-yah" or similar, and we totally flipped out. I think it referred to some other incidents back in the 70s, not the then-current events. But there were more and more of these little scenarios that had barely disguised references to Soviet leaders, the PLO, Arab leaders, Iran, etc.

Does this ring a bell for anyone? What was this game supplement or whatever it was?