I was looking over my Lands of Ara Gazetteer (available on this page) and came to a startling realization: I have never blogged about The Western Lands! I mean, I have mentioned them here and there, and my current campaign even started out on their southern frontier, but I have not yet composed a full-blown Gazetteer entry for the region. 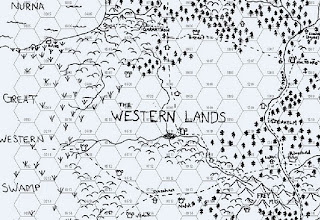 The Western Lands refers to the large, western Arandish land area bordered by Noffel to the south, Aldoria to the north, the Great Western Swamp and Gray Mountains to the west, and the Achelonian border (i.e., the north-south Endyn Trade Route and Endyn River) to the east. It is an extremely loosely governed coalition (or maybe just collection) of small baronies and fiefdoms, some legally recognized by established Arandish powers (e.g., the many Achelonian petty nobles in the region), and many others whose sovereignty is hard to determine and exist mainly through force of will and/or arms.

[To continue, quoted from here:]

"The Western Lands are a loose confederation of independently held baronies and smaller land holdings that blur into the wilds of northern Achelon to the east and stretch toward the coastal Grey Mountains to the west. These are frontier states, untamed and raggedly governed. There is no central reigning power, only individual territories overseen by barons and baronesses ruling more or less as they please. Most of the barons wish to keep it this way, though there are a few individuals who believe it would benefit the region to unify into one realm. [. . .] I encourage players and referees to flesh out these lands to fit into your own adventure campaigns. Feel free to make up your own baronies and territories as you see fit, for this is a wild area ripe with possibilities." 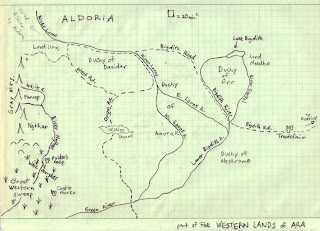 The Western Lands - North
This is the slightly more densely populated half of the Western Lands, largely since the Great Western Swamp covers so much of the other, more southerly portion.  Here in the north, despite the ubiquity of a good assortment of large, fearsome monsters including northern bears (stat as cave bears) and wild ogres (see stats here), there is plenty of verdant, wooded land, much of it suitable for ranging livestock.  This is also where Tradefair, the single largest town in the Western Lands, sits [not indicated on hexmap, but it occupies hex 1107].

The City of Tradefair
Tradefair is a fairly large (pop. 9,600) free city that some call the "Kaladar of the Wildlands.” Though its permanent population is largely made up of Arandish humans, many dwarves, rodians, and even ogres live there as well, and its transient population includes persons of all races. It is the principle center for legitimate trade and commerce in the Western Lands. As in Kaladar, nearly anything may be bought or sold here. Tradefair supports a small spellcaster’s guild, and it is widely believed that the Invisible Hand has a secret meeting place somewhere in or near the city.  The city of Tradefair has its own Lord Mayor and Guard Corps.

The Northwestern Baronies
Barony of Farrep
Rodgar, Lord Farrep, wants to keep the Baronies free. His is a reputable, hard-working mining colony on the western frontier of the wild lands. Along with Ngthar, Farrep is one of the two oldest Baronies granted by the Queen of Achelon, and Rodgar even rivals the Dukes of Orr and Anorak for being one of the richest and most powerful landholders in this region.

Barony of Ngthar
Murdock, Lord Ngthar, is owner of numerous highly productive mines, excavating ores used in the forging of dwarven steel. His exports travel east overland to the dwarven smithies in the mountains beyond Telengard.  He is known to be extremely rich, though not seemingly interested in regional politics or power.

Duchy of Nostromo
Duncan, the Duke of Nostromo, lives at Castle Finnegar. The current duke’s father was an illegitimate though favored son of an Achelonian prince, so Duncan’s blood ties to Achelonian royalty are considered to be weaker. Therefore, the current Duke of Nostromo is not a particularly influential Duke, and he has been known to rabble-rouse and complain about this fact at gatherings of the local Western nobles.

Duchy of Anorak
This large expanse of rich farmland is held by Anorak, the eldest of two sons of the late Duke Orum, a favorite of the Queen of Achelon. When Orum fell into ill health nine years ago, he split his realm, giving land to each of the brothers. Anorak is also in the Queen’s favor, and is an Achelonian loyalist. He is fair and reasonable, though he distrusts Telengardians somewhat. Anorak has a son, Warro, who is a hothead and resents “queer Uncle Davidar,” whom he views as an obstacle to his own father’s rightful claim to all of Orum’s lands.

Duchy of Davidar
Davidar is a nature-loving man who, it is whispered, has connections with the Land of Aldoria. It is in fact widely reported that the Duchess of Davidar, Alnara, is an elf. Davidar’s interests keep him at a distance from the Achelonian courts, so though he is charismatic and powerful, and respected by his brother, Anorak, there are many Westerners who frown upon Davidar’s rumored association with faerie, and he is little known in Achelon.

Barony of Urn
A ruthless, mercenary landholder and miner, Lord Urn is vehemently anti-faerie, and is rumored to use Aldorian slave labor in his mines. It is also said that he sells his ore to Suhlian pirates on the western coast. Lord Urn is not fond of visitors and employs a violent, mercenary guard corps to defend his property.

Duchy of Orr
The Duchy of Orr is ruled by Herbald, a famous Achelonian general granted lands and title by the present Queen. Herbald is quite large and muscular and is known to be a deadly two-handed swordsman, even despite his advancing age. He is an authority on the lore of Noffellian Sword-Cleric Silverblade the Stout-Hearted. Some of his minions include Sir Ronald Glastonburg, his personal vassal and commander of his troops, and Ooochh, a domesticated rock troll who is utterly loyal to the duke.

Barony of Needbo
The current Lord Needbo is a reclusive and scholarly man. Castle Needbo is an ancient structure, and the Needbo family is said to have been here since long before the Achelonian land grants. Some locals believe the Needbos are connected in some way with faerie.

Faldor’s Keep
Lord Faldor is a non-noble landowner thought to be friendly to the Arandish White Council. His keep lies on the eastern bank of the River Ngthar between the Barony of Ngthar and Castle Morko. His small landholdings and introverted personality keep him from much unwanted notoriety, and his location—just across the river from the dreaded Wosc Marshes (also called the Haunted Marshes)—does not encourage guests.

Wilkiss
Wilkiss is the name of a small shepherds' village as well as the name for the wooded area that surrounds it.  Deep in the woods outside the village is rumored to dwell Crooql [pronounced CROO-koo], the mad hermit of Wilkiss. Crooql is extremely reclusive but supposedly knows a great deal about local legend and lore.


The Western Lands - South
Much of this region is described in my post about the Great Western Swamp, yet there is one other key feature to be described: Castle Morko.

Castle Morko
Mad Lord Morko is a strange and unpredictable man who prefers to keep outsiders away from his land, most of which consists of swamp. In fact, the vast bulk of the Marshes of Margoon, a known breeding ground for swamp trolls, fall inside Mad Lord Morko’s territory. 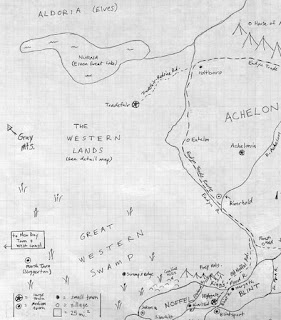