As regular readers know, Ken St. Andre's Tunnels and Trolls is a key part of my "gamer DNA" -- I was introduced to the game (by Michael Oshiro) fairly quickly on the heels of my earliest introduction to Holmes Basic D&D. I have spoken before of the game's many virtues and pleasures, and was reminded of them recently by ze bulette, who posted some great pics and a mini-review of T&T 7.5, an edition of the game I have never owned or played but about which I am very curious.

[Also, revisiting that aforementioned "virtues and pleasures" post of mine, I just noticed that Liz Danforth herself commented on it! And she's FAMOUS!]

All of this T&T-related excitement has led me to seek out Trollgod's Trollhalla, the online home base for T&T fandom. All it took was answering a few questions, and now I am on the path toward enhanced Tunnels and Trolls adventures and experiences! The coolest part of joining the Trollgod's Elite Champions is that the Trollgod himself -- legendary T&T creator Ken St. Andre -- is the site administrator! Yup, I got an email from Ken St. Andre! If you had told me when I was a fifth grader playing T&T that I would one day have direct (virtual) contact with the game's author, I would never have believed you.

Of course, as James Maliszewski has discussed before, the T&T game has stayed remarkably consistent over all these years, and it seems like part of this consistency stems from St. Andre's direct involvement: he has always kept himself accessible to the fans of his game, in ways that go above and beyond the average. This direct connection to the guru of the game system I'm playing is one of the great perks and joys of being part of our old-school hobby; this kind of personal touch doesn't seem a prevalent part of corporate RPG culture (e.g., WotC), though perhaps I misjudge.

At any rate, I have to go get to work on some material required for my deeper initiation into Trollgod's Trollhalla, and I don't really have much else to say here anyway except: T&T rules! And so do Ken St. Andre and Liz Danforth! 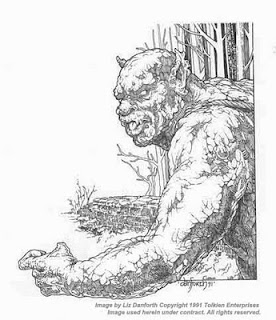 "Hey you! Git yer ugly mug out there and play some Tunnels and Trolls!"
(Stone troll illustration copyright 1991 by Liz Danforth.)