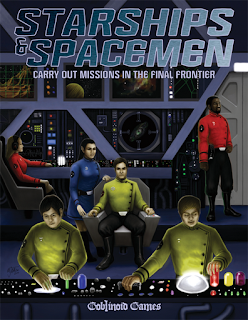 Dan Proctor just announced the start of the IndieGoGo Campaign for Starships and Spacemen, the forthcoming Labyrinth Lord-compatible sci-fi game from Goblinoid Games! I have been eagerly awaiting this release for some time now, and I strongly urge -- no, I beg -- you to please help fund this worthy project so that several months from now I can finally hold it in my hot little hands. Check out the Goblinoid Games blog for complete details, but here is a snippet of the product description:

Starships & Spacemen was first released back in 1978, only the second science fiction RPG ever to be released.

This second edition of the classic game is compatible with Labyrinth Lord and Mutant Future. The best elements of the first edition have been kept--the classes and subclasses, the excellent starship rules, and the space adventuring rules. Classes, races, and abilities have been made more in line with Labyrinth Lord.

This second edition has elements that let you customize the style of play whether you prefer an "original series" feel, a "next generation" feel, or something in between.