Tales from OSRCon - The Tower of Death

Okay, now it's time for me to report on a central part of my own OSRCon 2011 experience: writing and running The Tower of Death.

As I originally announced I would do prior to the Con, I ran "straight" Labyrinth Lord (no AEC, minimal house rules) for adventurers of levels 3-5, in an exciting scenario entitled The Tower of Death. I initially gave a PC level range (i.e., 3-5) because I thought I would "norm" or "equalize" the pregen characters by giving them equal experience point totals; but once I got there, I simply opted to roll up all the pregens as level 3 PCs, regardless of class, disregarding xp. Was that fair? Do other pregen-creating DMs stick to straight xp equality? It worked fine for me to do what I did, but as a neophyte Convention DM, I welcome suggestions, critiques, wisdom, and/or dissenting voices. 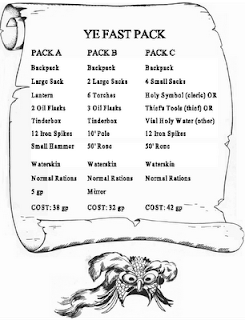 "Ye Fast Pack," three ready-made packs for D&D adventurers provided in Tom Moldvay's The Lost City.  I distributed a copy of this sheet to my players at OSRCon.
PC Preparation
So I went with 3rd-Level Characters and simply rolled up an array of pregens to cover the bases: a few fighters, two dwarves, two clerics, two elves, and one each for magic-user, halfling, and thief.  Then when I got to the game table, I let the players pick, on a first-come, first-served basis.  I rolled attributes, chose class, rolled hit points, and chose primary weapon(s), armor (chain mail for those permitted to wear it), and / or items (e.g., spell book).  I also gave each PC 25gp to start with in addition to all the equipment (including magic items) I gave them automatically.

Players were further allowed to swap out one primary weapon for another (i.e., I arbitrarily chose long sword for all the fighters I rolled, but permitted players to trade in the sword for a different melee weapon), to spend their 25gp as they wished, and to talk among themselves as they did all this.

Those B4 Fast Packs worked great! I am sure those will remain a staple of my Con game repertoire. 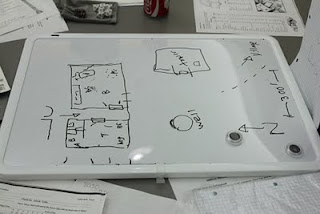 The dry-erase board I used at OSRCon.*  Here you see the Tower, the Well, and (on the left) an insert map of part of the upper floor of the Tower.
The Adventure
As at the playtest, I had a blast running both OSRCon parties through The Tower of Death. I am not going to describe the entire adventure scenario here -- see below for my future Tower of Death release plans -- but I will discuss some broad strokes of each session in order to convey a flavor of how each of my groups (including the playtesters) responded to the module's challenges. 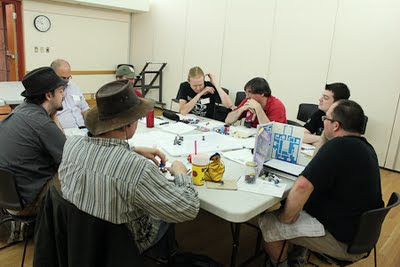 OSRCon Session One
Friday, August 12, 9:30am - 1:30pm
My Friday morning Labyrinth Lord table filled up; I had five players registered ahead of time, and seven players total on the day.  I think most of them had played early-edition D&D before, though I know I had a few newcomers to Labyrinth Lord.  I got my handouts distributed, reminded them of the two house rules (Multiple-Round Searching for secret doors and Shields Shall Be Splintered!), gave them five or ten minutes to equip and introduce themselves, and we were off!

While my pre-Con playtest group explored the "Haunted Well" only after they had already checked out the top floor of the Tower, my Friday AM OSRCon group -- Eric the Dwarf (Rene), Caraxis (Clr, Marc), Lars the Shadow (Thf, Rob), Dalkanarian (Ftr, Theo), E'bn (Ftr, J.C.), Mia BrookLaughter (Elf, Steve), and Sheltor (Elf, Greg) -- zeroed in on the well first thing.  Lars iron-spiked the Tower door shut, then lurked in the doorway keeping watch as his associates inspected the well.  Soon enough they had scaled down the well shaft and, like my playtesters, attracted the attention of some huge ogres in rowboats who came at them from across a large underground lake. Most of the Friday party's session was spent interrogating, hiding from, and doing battle with the ogres who lived in the caverns at the east end of the underground lake. The PCs learned that a powerful wizard-like personage named "Sorak" was a figure of authority in the caverns, and they surmised that he might be the kidnapper of the missing villagers. They found and rescued two of the hostages from the underground ogre lair, but never actually tracked down Sorak. Then, on their way outside via the ground floor of the Tower, a giant black widow spider viciously killed at least one party member (Eric the Dwarf? Mia the Elf?) as they made their bid for freedom. 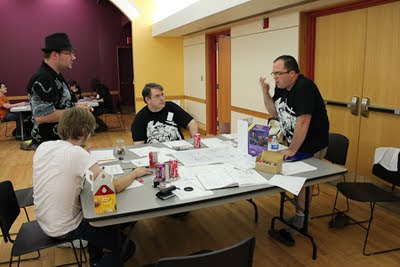 Saturday's players (counterclockwise from DM's right): John, Gary, and James.
Not pictured: Garfield.
OSRCon Session Four
Saturday, August 13, 3:30 - 7:30pm
My Saturday afternoon group had four players altogether, only one of whom was pre-registered for the session.  The biggest difference between my Friday AM group and my Saturday PM group, besides sheer numbers, was that this second group contained at least one complete D&D novice, and one guy (Gary) who only knew 3.5 and 4e. This necessitated some introductory words from me about old-school style play and a bit of extra guidance for those players during the character tweaking phase, all of which is good practice for my fall public Labyrinth Lord game at Lift Bridge Books.

Yet once the adventure started and the dice started rolling, none of these players had any trouble keeping up, and play moved along at an enjoyable clip.  In fact, this four-player group was able to move through areas and situations in the module a bit more quickly than my Friday AM group, simply due to there being far fewer cooks in the kitchen, far fewer voices to be heard in discussions of "what to do next."  I think this fact, plus its being the last session of the last day of the Con, contributed to a heady, humor-filled atmosphere throughout this particular session.  Besides, I believe that a bit of levity and laughs can help novice players feel more at ease and less intimidated by what they don't yet know, rules-wise.

Unlike both of their predecessor groups, this bold foursome  -- Brother Grimwolf (Clr, played by John), Thorian (Dwf, Gary), Astoris Shadowstep (Thf, James), and The Great and Powerful Bob (MU, Garfield) -- stayed completely away from the "Haunted Well" and instead focused all their efforts upon exploring the Tower proper.  Like my pre-Con playtest group, Thorian's Marauders** entered the Tower via the hatch on the roof, and encountered the mummified magic-user buried in his ransacked study right away.  Once they defeated this undead menace and found the 8,000gp in the mummy's coffin, the group did something that was (for me) completely unexpected: they left the tower and headed straight back to the nearest village.

You see, the adventure presumes that the adventurers assemble in the nearby village of Kerkymer Hill, and, in the case of a PC death, it is permissible to send out for reinforcements / replacements (i.e., a new PC shows up to replace a dead one after one hour of in-game time elapses).  So this particular group of players took that as license to return to the village with their newfound loot and re-equip themselves, which actually made a lot of sense given that they were a bit short staffed.  After re-equipping and spending the night in the village, they returned to the Tower the next morning, searched the rest of the upper level, and ultimately rescued two of the module's four hostages, as good as any other group did.  They killed or neutralized one mummy, one "purple slime," four purple skeletons, and four bugbears, and took 8,000 gp worth of mummy's treasure.

Playtest Group
The playtest group for The Tower of Death followed more or less the same course as my Friday AM group, focusing more upon the well and the ogres than upon the Tower and the purple slimes. They rescued two hostages and killed or neutralized one mummy, three bugbears, seven ogres, and an ogre-like being in arcane robes (okay, that's Sorak).  They also found the mummy's treasure as I recall.

Next Year at OSRCon
Maybe, for variety's sake, I will not run a homebrewed module next year, but rather a custom-stocked and slightly tweaked Old Classic . . . perhaps adjusted for adventurers of level 6 or 7 . . . 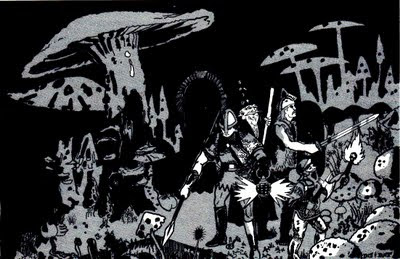 Does Quasqueton await?
All OSRCon photos copyright 2011 Garfield Noyahr.
--
* This dry-erase board worked great at OSRCon, but then when I got back I saw this picture of James M.'s Crystal Caste "combat mat" on this post and then read this comment and now . . . thirty bucks later . . . well, more about that in a future post.
** This group moniker did NOT arise out of game play; I am imposing it now for the hell of it.