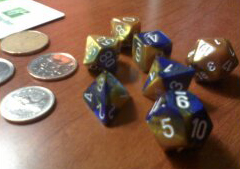 While I was away at OSRCon last weekend, one of the other attendees asked me if I'd yet gotten wind of Zak Smith's proposals about online RPG'ing via Google+. It so happens that I am laptop-less so hadn't been reading blogs since my departure to Toronto. But now that I am back, I am catching up on OSR blogosphere happenings, and I think what Zak is instigating and facilitating over at his blog is tremendously exciting and possibly paradigm-shiftingly significant for our hobby -- see quote at bottom of post.

In addition to providing a venue at which Google+ DMs and players may announce and schedule games, Zak encourages cross-pollination between our various campaign worlds by instituting the FLAILSNAILS Conventions, a series of protocols meant to "Establish this set of Free Location And Inclusion Laws Supporting New And Interesting Leisure Situations." This dimension of the undertaking excites me a great deal, and lends creedence to Laowai's notion that Google+ virtual gaming could "[warp] us to a virtual space not unlike Arneson's fast-and-loose 1970's Blackmoor campaign where Dave was reportedly co-ordinating a hundred player characters at the same time in six dungeons with different DM's." Wow!! Sign me up!!

Zak is additionally working to provide helpful updates like this one in order to assist participants (especially "technologically challenged" ones) in running their Google+ games smoothly and efficiently.

This "ConstantCon Revolution" is generally well-timed for me. As regular readers know, I have been keeping my original Oregon-based face-to-face group together via Skype since August 2010, when two of our people (including me) moved to new states. Therefore I am already quite comfortable using online video chat to run D&D games. Much more recently, Greg, one of the players in my Friday morning Labyrinth Lord session at OSRCon, proposed to our group that we attempt to stay in touch and game together via Google+ in the future. What this makes clear is that the idea is out there, it is taking hold in a palpable way, and lots of folks in our corner of the hobby are picking up on it and running with it. 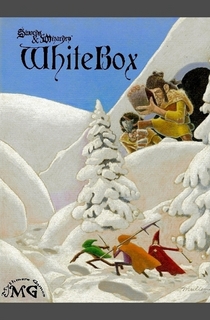 Zak's initiatives have opened a door in my mind relating to my longtime desire to play Swords and Wizardry White Box. As Theo has recently suggested, simple, rules-lite systems may work best for purely online play, and this assertion (whether true or not) dovetails with my desire to try out a ruleset even more stripped-down and 1974-ish than Labyrinth Lord. I do not want to switch gears on my home group at this point; so maybe an alternative campaign could be established via Google+, using S&W White Box in the Lands of Ara setting. I have some specific ideas already, but will wait to unveil them in a future post, once I am closer to going "official" with this.

In the meantime, may the Roleplaying Gods smile benevolently upon Zak S., and guide the FLAILSNAILS participants in all our future endeavors! I look forward to gaming with many of you folks online in the near future!

"I'll be absolutely honest here: I consider online games to be, at best, poor substitutes for meeting with friends in one's home every week. However, I'm also rather keen to give this a whirl, since I've seen a number of people speak well of it."

--James Maliszewski, 8/2/2011
"I like the energy that Zak has been channeling into his vision of a "Constantcon" on Google+. If enough people get on board, I think this could reach critical mass and revolutionize the hobby. It could be a virtual resurrection of the good ole days when high school gamers gathered during lunch break to play casual pick-up role-playing sessions. Something like Google+ has the potential to get us close to this freewheeling gaming space, which strikes me as much more Old School than the biweekly scheduled meetups that most adult gamers are constrained to. I can see a Google+ Constantcon warping us to a virtual space not unlike Arneson's fast-and-loose 1970's Blackmoor campaign where Dave was reportedly co-ordinating a hundred player characters at the same time in six dungeons with different DM's."