The Adventures of James Bomb 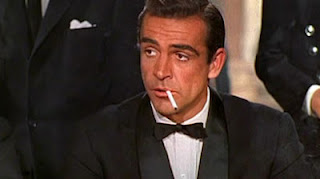 I have always been a big James Bond fan, and that fandom not only extends to the Ian Fleming novels and the popular film franchise, but to the Victory Games James Bond 007 RPG as well. I haven't played the latter much, but have a couple of times, and I recall the system being pretty fast-paced, easy to pick up, and generally quite elegant. Back in the day I played Top Secret a great deal, but have looked over those rules recently and find them a bit clunky.

So one of my "back burner" projects this summer will be to take a look at the James Bond 007 Basic Rules and see how easily they dovetail with the FUDGE RPG system. I will dub this project The Adventures of James Bomb. While fans will observe that "James Bomb" is the name of one of the characters I played in Carl's now-defunct Mutant Future campaign, its actual source is the Ian Fleming novel Goldfinger (1959), wherein the partially deaf Auric Goldfinger accidentally calls Bond "Mr. Bomb" early in the book.

My sense is that the James Bond 007 system will adapt relatively easily to FUDGE, and when and if I get the basics written up, I will share them here. 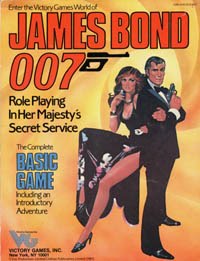