As I stated in a post late last year, local RPG'ing opportunities abound! And with school out for the summer, my work activities are less intense, and my schedule is more flexible, so I can more easily partake of many of these delicious gaming offerings. Here is the rundown:

(1) Of course, there is my longstanding "home" (actually Skype-based) Labyrinth Lord campaign, which takes place in the Lands of Ara setting. That group has recently played its 57th session, though my session reports are still lagging a bit behind. 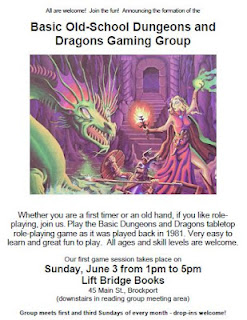 (2) As I've recently announced, I am about to commence an open, public Labyrinth Lord game which will start on June 3 at 1pm at Lift Bridge Books. That group, technically a continuation of a campaign I started in early spring, will be starting their adventures in an underground city located underneath a step-pyramid buried in the desert. But I do not necessarily assume that they will stay underground for long, nor even in the general vicinity of the step-pyramid, for long. In fact, I suspect and hope that sooner or later they will wander into the Lands of Ara proper.

(3) I will return to OSRCon 2012 in nearby Toronto this year, where I will run a homebrewed Labyrinth Lord adventure entitled Keep of the Zombie Master. I will be running that adventure twice during the Con -- I am GM #6421 on the OSRCon event schedule. Event coordinator Chris Cunnington is doing a great job keeping the OSRCon blog updated and bringing together a great roster of guests this year, including James Maliszewski, Ed Greenwood, and Ken St. Andre. Please consider attending this superb event, 10-11 August 10-11, 2012 (Fri. and Sat.) at the Lillian H. Smith library in Toronto.

(1) There is the FUDGE-based Star Wars campaign that just got started last weekend.

(2) I also started playing in an every-other-Tuesday evening campaign called The Mordav Initiative, a fantasy setup using a modified FUDGE-type system that Cid, the referee and system creator, is calling Zodiac since it uses the d12 exclusively. The first session took place last week, and it's out of town with a different group than my usual Brockport- and Rochester-based gang.

That's all for now, though one of the other players in the FUDGE Star Wars game has been talking about running a campaign, maybe on Tuesday evenings alternating with The Mordav Initiative sessions. I do not know exactly what he is planning, though he did say he would "kill" to run this particular campaign. So we will see. I will not be able to sustain this kind of gaming schedule come fall, when my teaching duties resume, but right now it is awesome to have the luxury to participate in this many RPG campaigns at once.