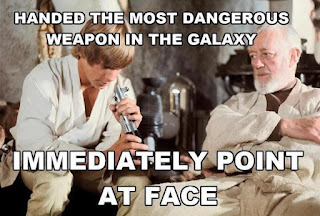 We played our first session of FUDGE Star Wars today, and it was a total hoot! Of course, the Star Wars universe -- especially with most of the ridiculous prequel material excised -- is particularly fertile ground for fast-paced science-fantasy adventure. Our campaign is set just before the events of Episode IV: A New Hope, with a revised back story that largely ignores the prequel trilogy.

We PCs are a crew of a Firefly class smuggler ship (yes, we are source-mashing here!) of which my character, Corellian smuggler Jackson Tarkanian, is the owner / captain. My companions include a Jedi knight, a bounty hunter, and a mentally unstable Dug. 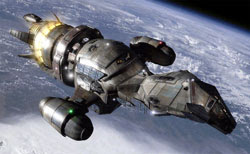 We began our adventure marooned on (where else?) Tatooine, looking for ways to earn credits with which to repair our ship. Luckily, Jabba the Hutt was looking for some desperate bounty hunters for a dangerous mission, and we accepted.

Due to time constraints, we did not get very far into the adventure itself -- we mainly looked for rumors (and got embroiled in a drinking contest) in the famed Mos Eisley cantina. Character generation ate up a good portion of our afternoon, but those familiar with the FUDGE System RPG know that chargen is a big part of the fun, especially for the ways in which it encourages players to interweave their characters' back stories and intertwine their fates. Indeed, as I have said before, the best thing about FATE / FUDGE* is the way in which its "Aspect" subsystem encourages good role-playing. In fact, one of our players who DM's a d10-based Wild West RPG with a different group has said that he now uses the "Aspects" subsystem from FUDGE in his own (non-FUDGE-based) game. In other words, this is a subsystem that could be grafted onto practically any existing RPG.**

If you haven't looked at FUDGE before, I would strongly encourage you to follow this link, download the "FUDGE 1995 Edition," and check it out for yourself! 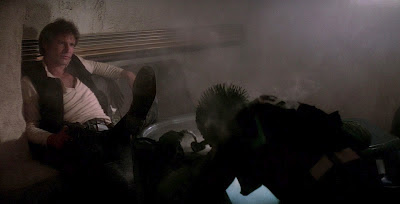 More to come on my future plans for FUDGE. . .
--
* FUDGE is the "official" name for this RPG: it is an acronym which stands for Freeform Universal Do-it-Yourself Gaming Engine and was written by Steffan O’Sullivan. Fate RPG is a game based upon the FUDGE system, and I sometimes use the names interchangeably, though I may be doing Fate an injustice by so doing since I know nothing about it specifically.
** I would add that our Star Wars referee, Cid, has come up with a few additional guidelines for use with the FUDGE system, all of which deal with "tagging" and/or "compelling" Aspects. I may eventually publicize and discuss Cid's enhancements here, though I have it on good authority that he is developing his own website. . .