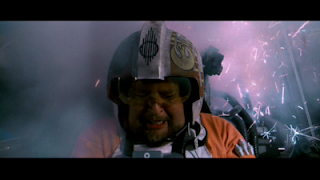 The death of Porkins.
After the battle, there was just some final searching about and settling in to do.  The party liberated a human prisoner from his cell in the adjacent Dark Orc prison, then searched the only two remaining rooms, finding no living denizens but happening upon a huge statue of a demon-like creature in the final room.  The party decided to pull the wooden ladder up, post hireling guards, and get some rest.
Referee's Observation: Interestingly, the party was much more focused on reaching the assumed end of the lower level and encountering the boss than they were in doing thoroughgoing exploration this session.  This may have had to do with their somewhat reduced numbers, and the fact that Barbarella was fairly low on hit points the whole session (they decided not to use Innominus' Cure Light Wounds until somebody really needed it in a battle situation).   They may have figured that they needed to clear the level of dangerous foes before those foes mobilized (remember the un-banged gong!) and started hunting them down.  But they did leave a few turnings unexplored, and while I personally welcome this -- I actually get somewhat bored by parties who obsessively comb every square inch of a dungeon -- it will be interesting to see if they decide revisit any unexplored areas next session, or simply press on into still more uncharted territory.  We'll find out next week!