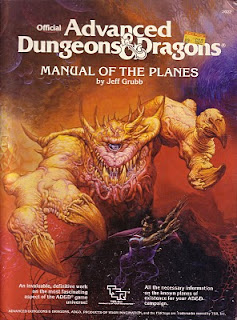 My friend Carl, who is loyal to the Old Ways but nevertheless has more interest in D&D 4e than I have been able to muster, has been raving to me lately about one specific 4e publication, the Manual of the Planes.  Carl knows I am quite interested in gates and weird extraplanar travel, although I myself have never owned nor even used a reference book of any kind for my extraplanar adventures.  I have never felt a need to explain or justify how or why the planes work, nor have I ever felt the need to catalogue, categorize, or otherwise elucidate the "facts" about the extant planes in my campaigns.  In fact, I deliberately leave that stuff pretty damn open-ended and nebulous, since the average PC knows shit-all about other planes, and even those rare individuals who investigate or engage in planar travel do not widely share their hard-earned knowledge with the public.  In short, in my campaigns, visiting other planes is rare and requires the help of a specialist who knows what he/she/it is doing.  Thus precious little "common knowledge" about other planes or how to reach them exists.

I should also add that when I say "other planes," I do not even mean those listed in official AD&D publications like the Player's Handbook.  I never had much use for that crap.  I enjoyed reading about the planes as AD&D presented them, and there were certain specific ones, notably the Abyss, that I always liked and imagined existed in my own campaign-world.  But I could never make heads nor tails of those damn diagrams on p. 121 of the PH, so as far as official TSR publications went, my favored source text for what adventures on other planes could be like was Module Q1: Queen of the Demonweb Pits (which is probably why I liked the Abyss).  In fact, Q1 aside, my concept of the planes was and is probably much more heavily influenced by Roger Zelazny's Chronicles of Amber novels, which again leaves a great deal up to the interpretation of the individual planar traveler.  Sure, there are a few "stable" locations out there -- in Zelazny's case, Amber, the Courts of Chaos, Avalon, 20th-century Earth -- but a lot of what happens beyond one's home dimension (what AD&D calls the "Prime Material Plane," a term I don't have much truck with either) is unclear and in fact changes each time one travels through shadow / to and from other planes.

That said, I have been enjoying reading lots of RPG books lately, and in fact was in a local comics shop a couple of months ago and came across Jeff Grubb's 1e Manual of the Planes for the low low price of $6 (you can see the price sticker still on the cover in the scanned picture above).  I just couldn't turn that deal down, though the book itself has been sitting on my shelf unread until quite recently.

Back to Carl: at our most recent weekly Labyrinth Lord session, he brought over and temporarily lent me the new 4e Manual of the Planes.  He especially urged me to read the sections on the "Feywild" and the "Shadowfell," of course ignoring the 4e "crunch" and focusing on the descriptive passages.  I trust Carl's instincts so depsite my distaste for 4e and WotC products in general, I leafed through the introductory sections and the two bits that Carl wanted me to.  And not only did that initial taste inspire me to read further -- at least up to the part about the City of Brass -- it also spurred me to finally pick up Grubb's original and give it a quasi-serious reading.  What follows are my random comments about the two books, NOT intended as any kind of comprehensive review of either, but just my mental ramblings, mostly a list of stuff I liked or found useful in each text, with a few complaints and grumblings peppered in for good measure.

Please note at the outset that I am extremely biased against 4e -- I really don't like anything about it.  I do like some of what I found in the 4e Manual of the Planes, but no doubt my negative feelings about that "bland, over powered, perfectly balanced" system (Katallos) will no doubt creep into my comments here.

Let's start with the earlier 1e text.  As Jeff Grubb writes in the book's Foreward:

One of the basic assumptions of this tome is is that what has been written in the past is true, and it is our job to explain it. The chief reason is that the AD&D system is a living and dynamic system that is built upon the foundation of its past.  While the game can absorb any amount of new material, casting off pre-existing material often damages the system.

Of course, this type of traditionalist rhetoric (written in 1986) warms the heart of an old D&D grognard like myself.  Highlights include a succinct discussion of travel in and through the ethereal plane (pp. 11-14), the brilliant description of the River Styx as flowing between multiple lower planes including the Nine Hells, Hades, and the Abyss (p. 83), and of course the descriptive sections on two of my favorite "classic" AD&D planes, the Abyss (p. 101) and the Nine Hells (p. 109).   Despite the book's valiant efforts to explain and contextualize the maps originally found in Appendix IV of the Player's Handbook, I still don't have much use for the maps of the planes included in the Manual of the Planes (pp. 6-7, 52, 74).  I guess for me, alternate planes should retain near-complete mysteriousness as to their "whereabouts" and obviously do not follow typical rules of spatiality or geography anyway.  Thus, the very idea of trying to map at all them seems counterproductive to me.

That said, some of my favorite aspects of the Dungeons and Dragons IV version of the Manual of the Planes (by Richard Baker et. al.) included a couple of its maps, especially the main map found on p. 11 and the map of the City of Brass on p. 75.  I don't know how practical these maps really are, but they are sure as hell evocative.  Of course, this in part has to do with the overall high production values of this book -- an aspect of game design WotC has always done well.  The maps are glossy with great colors, and are great fun to look at.  Of course, as I've said,  don't really believe in mapping the planes anyway. . .  and I am still not sure why the Nine Hells and the Abyss are in totally separate places -- the former in the Astral Sea, the latter in the Elemental Chaos-- in this new iteration.  I mean, factually I know it has to do with D&D IV's classification of Demons as Elementals, but I have no truck with that bullcrap and when I see this map that particular aspect of it strikes me as wrong -- it evokes for me James Maliszewski's repeated comment that D&D IV is "rootless."  But on the other side of the coin, I am particularly thrilled to see the famed City of Brass included in this book (p. 73) -- is this the first time that locale has been described in any detail in a D&D publication?  In any case, kudos to these folks for including it, for it is one of my favorite classic AD&D legendary places.

The main difference between these two books (and the respective editions of the game they belong to) is that one (the 1e tome) is invested in elucidating and expanding what came before it in the PH and certain modules, the other (4e) is invested in consolidating and streamlining the whole "other planes" concept, without much structural reference to the past.  To be fair, I was pleased to see that the IV version includes a one-page summary of the planes as they appeared in "earlier editions of the game," for some reason dubbed here "The Great Wheel" (p. 15).  But generally, the newer tome picks and chooses what it takes from the earlier editions, instead positing its own wholly new organizational scheme and many new planes and planar locales.  From this point of view, the earlier Manual might be called an "esoteric" elucidation of the planes, and the IV version the "streamlined" version.

One of the best overall concepts found in the D&D IV Manual of the Planes is the Astral Sea -- this is a great extraplanar locale and a very rich idea as presented here.  I REALLY like the general concept of "parallel planes" for I have long felt (probably borrowing again from Zelazny's Amber) that some planes must lie "closer" together than others, and I particularly like the "Feywild" concept and will borrow something similar for the Lands of Ara.  However, I must take umbrage at these ridiculously pedestrian and obvious-sounding names: "Feywild"? "Shadowfell"?  A dark city called "Gloomwrought"?  WTF?  The concepts aren't bad -- and the Gloomwrought map (p. 58) is quite inspiring -- but please save me from these stupid-sounding place names!

As James M. has written in a review of Goodman Games' Points of Light:

This is one of the best things I can say about the D&D IV Manual of the Planes: its overall production values are superb -- this is probably half the reason why I find its maps so compelling.  But Carl was also right: I have found a few concepts -- the Feywild, the Astral Sea, an underground city that looks like Gloomwrought but is named something else -- worthy of my attention here, and I am glad he lent me the book.  I would probably even consider buying one myself, once I can get over the bitter taste of giving WotC my money.