Gannar - Dwarven Stronghold of the North 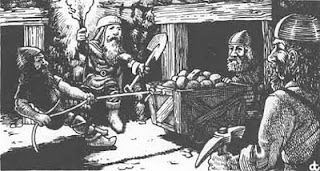 In year 3008 of the Old Calendar, just six years into the nearly hundred-year long Old War, Telengardian dwarves discovered the secret of making steel, and began forging steel implements in the mountains of Gannar to aid the Telengardian war effort.

Shortly after the end of the Old War, in New Calendar year 8, the dwarves of the Northern Telengardian region threw off their human rulership and declared the formation of the independent Dwarven Sovereignty of Gannar.  Then as now, Gannar is a huge walled fortress city with vast underground tunnel systems beneath, and is larger by far than any other Arandish city except the Free City of Kaladar.

To this day, the dwarves of the northeastern mountains are the discoverers and sole producers of the strongest metal known on Ara: dwarven steel. These mountainous dwarven lands, of which Gannar is the main city and trade center, are famous for iron mining and craftsmanship of metals and precious stones. The dwarves of present-day Gannar are largely self-sustaining, raising sheep, mountain goats and various subterranean fungi for wool and consumables.

Although no PC adventure party has ever set foot inside the walls of Gannar, at one time in the past I brainstormed / sketched out the broad concepts for a duology or trilogy of adventure modules set in the dwarven regions of northeastern Ara.  The first adventure -- the first segment of which I did run in one of my very first Crimson Blades of Ara campaigns -- involved hunting down the exact location of a cave of marauding hobgoblins.  The hobgoblin-hunting actually took place outside Gannar proper, in border territory between the dwarven lands and Telengard, and assumed a mixed party of humans, dwarves, and other demi-humans.  The adventure (had my party chosen to "finish" it instead of pursuing other leads) could have concluded in Gannar proper, where the party would reach the end of the hobgoblin tunnel to discover it surfacing dangerously and disturbingly near the Walls of Gannar.  In that scenario, the party (hopefully) warns the Gannarian king of an impending hobgoblin invasion and gets rewarded.  As I mentioned, my party never made it that far, as they opted to pursue another adventure hook after one or two skirmishes with the hobgoblins.  But had they found the inner tunnels and made it to Gannar, they probably would have been asked by the dwarven higher-ups to stick around and help with another problem, leading them into. . .

Exploring the Deeper Hobgoblin Tunnels, which would constitute the bulk of the second module of my imaginary "Gannar adventures" trilogy.  Not only would the deeper tunnels reveal much more fearsome monsters in league with the hobgoblins (of course), but sometime during this second module, a force of hobgoblins actually burrows into dwarf tunnels near Gannar, and a huge underground war starts.  Note that Crimson Blades of Ara, the game for which this adventure was originally conceived, awarded a bonus to tunnel fighting skill for dwarves, and I would grant a similar bonus in my Labyrinth Lord version: +2 for dwarves, +1 for rodians due to size and nimbleness.