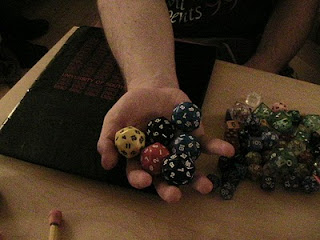 Carl is ready for adventure with his handful o' d30s!
We seem to be averaging 3-4 players per session lately, which is actually pretty damn ideal. . . on nights where it is only three PCs, like last session, hirelings get more involved (R.I.P. Porkins!) and the players have to be more cautious and/or selective about how they proceed through the dungeon.  On nights with four PCs, like last night, more carefree combat mayhem can ensue -- though not without some attendant deaths and near-deaths on the party's end.
Tonight's PCs -- Uncle Junkal (Bard-1), Innominus (Cleric-1), Hazel (Fighter-1), and Barbarella (Rodian Duellist-1) -- began the session in the chamber of a huge demonic idol.  Hazel and Barbarella climbed the idol with ropes, peeked inside its hollow "eyes," and found that there was a chamber within, including a ladder down to a level further below.  Noting that the dark orcs in this area apparently had not yet discovered this hidden chamber or ladder inside the idol, the party decided that it would be worthwhile to leave the idol be for now and instead revisit two of the previously unexplored chambers back the way they had come.
First they came to a storeroom filled with a great many mundane pillaged goods.  The most noteworthy of these items were three barrels of oil, which the party used to fill many flasks and even one lidded stew pot sealed with melted beeswax!  This last was Barbarella's idea, and despite some initial skepticism voiced by other party members, her decision to bring along a whole cookpot full of oil would soon prove fortuitous indeed.
They returned to the "gong room intersection" from last session, and began exploring the eastern passageway, when they heard whispering orcish voices approaching from that direction.  Innominus and a nameless hireling went after the gong, while Barbarella dumped her cookpot full of oil right in the "dogleg" of the eastern passage.  Then she and Uncle Junkal withdrew into the intersection with oil flasks ready, while Hazel took a rearguard position.
One orc, Romano, poked his head around the corner of the dogleg and shot his crossbow at the party, while a second orc, Hooker, dive-rolled across the passage to a nook in the southern wall.  Uncle Junkal and Barbarella hucked their oil flasks, one of which caught Romano in the face, another of which flew past him but nevertheless landed within Barbarella's oil patch, setting it ablaze.  Romano the orc was incinerated, and Hooker fled back down the eastern passage the way he had come.
The party waited a turn or two for the flames to die down, then proceeded down the hallway to the east.  The orcs fired upon them with crossbows, but Innominus and Hazel were carrying the gong between them as a large missile shield, which was quite effective; no party member was hit by crossbow fire.  By the time the party reached the end of the hall, the orcs had shut themselves in behind a heavy oaken door.
Hazel wasted no time in bashing down the heavy door, a feat she accomplished so swiftly and decisively that one dark orc behind the door was thrown backwards a few feet and landed on his back under part of the door.  Besides that dark orc, now dubbed Sprawler, there were five other dark orcs in the room, one of which was a lieutenant wearing chain mail.  Combat ensued.  High points include Hazel sending her pet kestrel into combat to distract the dark orc lieutenant by shitting on his head (this worked -- the dark orc rolled a critical failure that round!), Barbarella's well-placed throwing dart attacks against her comrade's opponents, and Hazel's climactic bare-handed attack on the lieutenant, for which she rolled her nightly d30 roll for the damage, got a 23, and instantly tore him apart.
With all but one dark orc (old Sprawler!) vanquished, and after a momentary debate about whether or not a dark orc could be productively interrogated, Innominus finally delivered the killing strike to Sprawler.  But before Sprawler died, the crafty dark orc blew a whistle, summoning the party's final challenge: a huge ogre that lumbered into the chamber from an adjacent dark alcove, ready to kill them all with its massive spiked club.

A fearsome ogre!
The ogre gained the initiative, but on its first attack vs. Hazel, it missed.  Uncle Junkal then used his bardic charm person ability (rolling his nightly d30 for the d% roll) to charm the ogre!  The ogre failed its save, and it was pacified!  Uncle Junkal and the party looked forward with some relish to how the ogre would be of use to them in future sessions, though Innominus expressed (completely justified) concerns that the ogre, once free of the charm, would instantly attack the party.
This was all moot because two rounds later, Uncle Junkal asked his charmed ogre to open a locked room, which (according to the scripted module -- I did not make this up!) had a deadly poison needle trap, which the dim-witted ogre did not notice until it was too late.  He unlocked the door, opened it, failed his poison save, and dropped dead one round later.
Despite some regret at the loss of the ogre, the group cheered up as they looted the treasure chamber they had found.  Barbarella and Innominus carefully checked each treasure chest before opening it and avoided two more traps in the process.
Now that they have completely "cleaned out" (to the best of their knowledge) this lower level of the orc caverns, it seems the party must decide whether or not to take a brief strategic aside back on the surface, perhaps to hire some more retainers and/or re-supply themselves at a town further away than Vedik.  They have pretty well exhausted what Vedik has to offer and are down to two retainers (Snikrop and No-name; a third, Mikey, died this session). Or, do the PCs throw caution to the wind and simply press on, venturing in to the eye-sockets of that demonic idol they found?  And what will they do with all their loot?  Tune in next time. . .