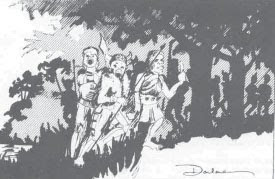 As I mentioned in my latest campaign session report, my Labyrinth Lord group ran into a new monster, the Dark Orc, in the lower levels of the underground orc hideout they were exploring.

In truth, the Dark Orc is essentially a substitute for a standard LL hobgoblin. . . its stats are quite similar.  I suppose my "conversion" of hobgoblin into Dark Orc stems from my general love of orcs, and my contention that hobgoblins should be more powerful than they are in the standard D&D / Labyrinth Lord rules.   So, bring on the Dark Orcs!

Larger, darker skinned, and far more disciplined than typical orcs, dark orcs are quite often encountered wielding long swords and crossbows, and wearing scale mail.  Dark orcs are highly organized fighters, and use ambush and surprise attack techniques to gain the advantage on their opponents.  Relations between dark orcs and their "regular" orcish cousins are often strained at best, due to the dark orcs' preference for martial discipline over brutal, chaotic violence.  But in some cases dark orcs have been known to combine forces with and even lead combat groups of standard orcs.