Mahalo, says thine Spawn:
Yesterday Mr. Telecanter posted an image of an Inuit tactile map carved in wood, that allowed Inuit folks to navigate shorelines by feeling the contours of the object. The beauty of this (one of the beauties anyway) is that it could be used in the dark, and of course served as a navigational aid when compass, sextant, and astrolabe weren't available. I imagine some really exquisite pieces of this kind being carved from walrus teeth, narwhal horns, and sperm whale baculums (look it up), as scrimshaw maps ... very cool treasure indeed. I like Mr. JDJarvis's example of a very literally coded map that could lead to a specific destination.

This brought to mind another tradition of navigational maps that work on different principles than most western folks are used to think about, but they obviously worked. That is, the Polynesian colonization of Pacific islands in the last 1500 years or so was the last expansion of anatomically-modern humans into uninhabited lands short of the establishment of bases in Antarctica. 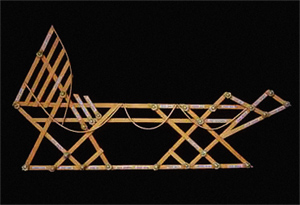 These are the "stick charts" made by Polynesian sailors up until fairly recent times that represented the direction of swells, currents, and the location of reefs and islands. This blogpost seems to have concentrated a bunch of great examples in one place (and also belongs to a blogger that stopped blogging but left the blog as an archive ... a great exemplar of the no-nuke blog option). 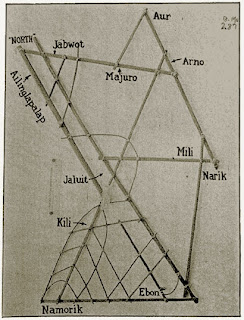 Apparently individual sailors made their own charts, and so some of these are really idiosyncratic representations of how certain people perceived the response of their boat to the conditions of the sea. Put another way, here's a record of the kinesthetic gestalt perception of sea travel, rendered in palm fibers and shell beads (the islands). Maybe some folks could interpret another's chart for navigation, but not necessarily.  It might be too personal.
This would be an interesting hook for an adventure. Say the party finds such a thing (in a dry cave, we'll say, to explain why it's preserved) and they figure it must mean something. They find an islander to help pilot their ship on the Sea of O'SR that recognizes what it is, but isn't sure how the thing is supposed to be oriented, what scale the thing is at, whether the shell beads mean islands, treasure, danger, sea monster lairs, whirlpools of flailing mayhem, zebra congresses of vitriol spit, or so on. And so the party sails on to their particular version of glory or doom. With enough sailing and mapping maybe they can figure out the proper scale and orientation of the map and use it to find their goal. Hmmm.
Well, thanks again to Telecanter for finding images of things that I wish existed, and then sharing them.