[Note: Any non-gamers tuning in to this series of posts are invited to consult my New Reader Introduction for some RPG-specific definitions and a general introduction to the Lands of Ara blog.  I also provide a few explanatory footnotes of my own herein.  RPG'ing veterans may ignore my asterisks.] 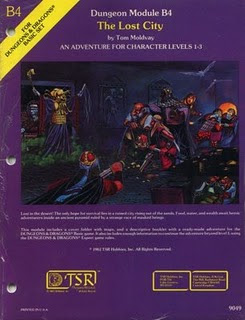 I was originally going to call my "C" post "C for Campaign," but then I re-read Tom Moldvay's classic D&D adventure module The Lost City and changed my mind.  However, aside from some Lost City-specific praise and comments, the general intent of the post has not changed at all, because what I want to talk about is the way in which that particular Basic Adventure Module works as a text to train new players and DMs in the ways of D&D, especially campaign-building.*

As I have written before, I started out my D&D career using the Basic D&D Boxed Set with the 1979 blue-covered rulebook written by J. Eric Holmes.  I never owned nor read the 1981 Tom Moldvay version of that rulebook until quite recently, when I ordered a used copy from Noble Knight Games.  Moldvay's edition is particularly welcoming, well-organized, and easy to follow.  I can hardly imagine a better book with which to initiate a neophyte player or dungeon master into the ways of D&D.  And if I were compiling an ideal "starter kit" with which to introduce someone to the Old Ways of B/X D&D,** I would likely include Moldvay's Basic D&D book in the box, along with his B4: The Lost City as the set's introductory module.

This may sound blasphemous to those of us who grew up with either B1: In Search of the Unknown or B2: The Keep on the Borderlands in our introductory box sets.  But my recent re-reading*** of Module B4 convinces me that it may be an even more effective and rich resource for training beginning Dungeon Masters than either of those other two much-revered (and superb) adventures.  The reasons for this has everything to do with the Cynidiceans.

The Cynidiceans are a dying race of masked humans living in the ruins of the titular Lost City of Cynidicea.  Buried underneath the desert sands in the wake of a major cultural decline, all that remains easily accessible of the Lost City are the five upper tiers of a step-pyramid.  The premise of the adventure is that the Player Characters have become lost in the desert without food or water, so they must investigate the pyramid in order to find resources to save their own lives.  Once inside, they will almost surely meet some of the Cynidicean inhabitants.

Moldvay's brilliance here is that he simultaneously presents in The Lost City two different (but related) "levels" of adventure:

(1) A classic and uniquely motivated dungeon-crawl, i.e., the players have to investigate the pyramid or starve to death.  Once inside, they will find a multi-level underground "dungeon," which is of course the traditional "default" setting for most D&D adventures.  In addition to being fun -- there are some very clever traps and some wonderful monster encounters in The Lost City -- this layout models for the neophyte DM**** the "standard" approach to D&D adventure design.

(2) Layered into the classic dungeon setup of the step-pyramid is an ongoing tension between three different factions of the Cynidicean inhabitants.  These three factions are open to having outsiders join, so the players are given a direct opportunity to get involved with local politics.  This involvement is not required in order to play the adventure -- the module makes clear that the PCs are welcome to just hack-and-slash their way through the step-pyramid if they choose -- but it explains in very clear terms how DM's might begin to incorporate the "role-playing" aspects of the game in the PCs' negotiations with the different factions they meet.

Now I may be biased toward this style of play -- I love it when players haggle, negotiate, and diplomacize their way through adventures -- and that bias may account for my particular love of this module.  But more than simply giving the novice D&D group a chance to act diplomatically, Moldvay here outlines how that might work in game terms, providing die roll based mechanics for negotiating with the Cynidicean factions and suggesting some broad story arcs that could result from the players allying themselves with one group or another.  I have never seen such a succinct and easy-to-follow primer for this type of more nuanced D&D play.  The module caps this off with some suggestions for expanding the adventure, providing the DM with sparse sketches of unkeyed areas, and concluding with a list of ideas for "endgames" based around a longer Cynidicean campaign.

While I have certainly developed a Lost City-ish sensibility over years and years of Dungeon Mastering, my initial training was via more tournament type modules like C1 Hidden Shrine of Tomoachan and S2 White Plume Mountain.  Thus it took me awhile to grasp the pleasures to be had in player-NPC negotiation and party alliances with in-game groups.  In The Lost City, Moldvay brilliantly lays out the basics of such an approach, thereby "introducing" it as a (potentially) core aspect of the game.  I only wish I had obtained, read, and played this module earlier in my career.

Readers interested in this module should also read James Maliszewski's insightful retrospective about it.  (He too is a big fan.)
--

*A campaign is an interconnected series of D&D adventures, usually involving a group of similar players (and characters) over time.
** B/X is an abbreviation for "Basic / Expert," referring to two connected sets of D&D rules released by TSR in 1981.  As it happens, this is the same ruleset that Labyrinth Lord, the newly-released "retro-clone," clones.  Why buy and read the B/X books if I already have (and happily play) Labyrinth Lord rules, you may ask?  Well, we old-school gamers tend to be a bit obsessed with our hobby, and some of us (inlcuding me) indulge our obsession (and our nostalgia) by collecting old versions of the rules.  This is fun because despite Labyrinth Lord's status as a "clone," there are subtle differences between the original B/X presentation of the rules and that found in Dan Proctor's excellent Labyrinth Lord books.
***Note that while B4 is one of the adventure modules I owned back in the "old days" (the 1980s), I have never actually used it in play; all my comments are based upon my reading of the module, not running players through it.
****Abbreviation for "Dungeon Master," the game participant who leads the "players" through their adventures.  The DM is sort of like a rules referee and story narrator all in one.