The session began in the afternoon of Day 171 of the party's Arandish adventures, as they approached the cave of Warren the Black, a reclusive Minochian wizard the group first met back in Session 36. They sought his help vanquishing the ethereal beings who were haunting their recently acquired mine.

As they neared the cave, a crow appeared overhead; it gave a "Caw!" and then flew down toward the cave. Moments later, the party rounded the corner and found Warren, dressed in woolen robes in his signature color, waiting for them, the crow perched upon his shoulder.

"Little Henry here says he remembers you!" said Warren, and showed the group into his hovel in the mountainside. He immediately bore left into a small cave with a fire pit and some fragrant, earthy tea boiling in a pot suspended over the fire. Warren offered them tea and they drank.

The PCs asked Warren if he could be of help in restoring Uncle Junkal to life, but alas, that lay beyond the wizard's powers. So the Rodian Bard remained a crispy critter for the time being.

Vivuli said: "Our mine is haunted and we need to kick the ghosts' asses.  Also, maybe you can restore our priestly comrade to his proper age?"

While Warren admitted that he could not help Innominus with his aging problem either, he did seem to think he had a solution for the party's mine ghost problem.  He said he could have some anti-ethereal-being scrolls written by the next day (which he did).

Lastly, Innominus asked Warren if he knew the story of the Ghost Tribunal?  Warren said their existence was a popular local legend but that the rumored arcane tower where the three adventurers met their fateful end (i.e., becoming ghosts) had never been located.

In exchange for this information and for the three scrolls of dispel ethereal being, Warren asked that the party bring him, in due course of time, the following items:

Yor also warned the eccentric old wizard that his valley was surrounded by throghrin squadrons, but Warren seemed unfazed.  Apparently no one messed with the reclusive arcanist.

The party departed Warren's cave that same afternoon set off for the plague-ridden city of Farn Junction, a half day's travel southeast. It was snowing moderately as they descended toward the town, which was enveloped in an ominous-looking fog cloud.  They passed by Farn Junction proper, reaching Prince Arkus' encampment a few miles further east by nightfall.

There they learned that Arkus had failed to summon a significant number of clerics to his aid; only Father Azamondius of the Kaladarian sect of Carcoon (Clr 10), plus two of his underlings, Brothers Theosophanes (Clr 5) and Scotty (Clr 3), were on hand.  Hardly enough priests with which to conduct a full-blown purge of the city! Yet Azamondius did agree to raise Uncle Junkal from the dead.

Seeing the Prince was in dire straits, Vivuli summoned vermin and got a bunch more rats, which he sent into Farn Junction forthwith.  Through their eyes, Viv saw that the smoke/fog layer enveloped the entire city, that there were literally no townsfolk visible, and that there were a few saurian balrogs about, occasionally flying overhead.  He could also smell via the rats a strong, pervasive rotting odor of the recently deceased, tinged with a bit of sulfurous smell.

Yor suggested to Arkus that he take a unit of his soldiers to the main city gate and create a diversion while the party sneaked into the city to reconnoiter and find out specifically what had happened to all the Minochians who used to live there.  Arkus agreed, so Viv turned the whole party invisible, and they camped the night, planning to commence their raid in the morning.

Day 173 dawned, snowy and dismal, and the party arose from a troubled night's sleep and made their way toward the fogbound city, accompanied by two of Vivuli's rats. All of them (including the rats) were invisible. Arkus' men showed them to a hidden well in a copse a short distance outside the eastern city wall; descending into the well, the party made their way through an underground tunnel and emerged through a trapdoor into the former city residence of the Lord Mayor, i.e., Prince Arkus.

A section of the Lord Mayor's Residence in Farn Junction; secret tunnel from Residence goes 500' east to hidden well in copse of trees. Note 60' diameter hellpit at bottom left.

The group made it to the residence (seemingly) undetected, the prowled around the property for the better part of an hour, finding a sulfurous, 60' diameter hellpit with three balrogs just west of their entry point (see large rough circle on map above).  They couldn't get close enough to see too deeply into the pit, but were able to feel the intense, sulfurous heat emanating from it, and could hear from below the sound of some hapless soul being whipped and screaming, and the three balrogs in the area laughing with pleasure at the unseen whipping victim's pain.

Venturing east, the PCs peeked up a street and spotted another balrog seemingly on guard duty outside a well-fortified two-story tower about 100' north of them:

The group decided to start some shit with the three balrogs surrounding the hellpit, so they approached through the ruined L-shaped banquet hall to the east, sneaked up as close as possible, and attacked!

A vicious melee ensued, wherein Yor lost a thrown handaxe into the pit, Dak's follower Rodney was pulled into the pit (and presumably to his doom) by a dying balrog's whip, and, near the end of the battle, Innominus had Yor throw him at the last remaining flying balrog, whom the Wolverine-like cleric struck down with his mace. The group slew all three balrogs and ended the session standing at the edge of the fiery hellpit, gloating over their triumph and looting the balrogs to the tune of six fire gems. 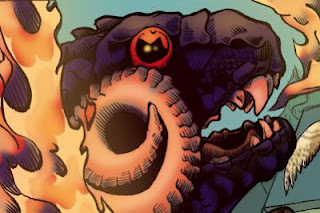 "We found a pit, a guy being whipped, and a gateway to hell . . . Farn Junction has really gone to shit!"
--Dak the Younger