Session 52: What the Rat Saw

The party finished up their ghost busting from last session, then, on Day 175 of their Arandish adventures, searched around in some as-yet-unexplored sections of their now ghost-free silver mine.

In an old, abandoned storage room near "Walt #3," Innominus had previously found a scroll tube, which he now opened. It contained a map to an "old" section of the mine hidden behind a cave-in at the northwest end of the place. After two hours of excavation, the party passed on westward into this "old" section. 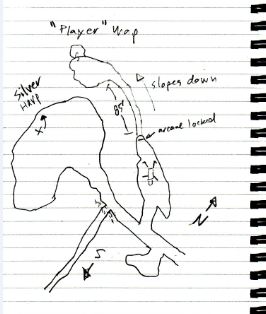 The "old" section of the Frigglestone Silver Mine.

To start with, in an abandoned storage cave on the left side of the passage, Uncle Junkal found a parchment inscribed with a 5" x 5" charcoal rubbing of an etched lyre motif. He kept it.

The party searched further west down the corridor, bearing right into a large natural cave that sloped steeply downward at its northwest end. Lying on this declining slope was the sprawled shape of a huge, giant-sized humanoid composed entirely of stone. Innominus cast detect magic, and while the vast prone stone figure registered as mundane, an 8' diameter circle on the northwest wall glowed brightly with arcane energy. Vivuli x-rayed the area and found a secret door with a mundane latch, but the party could not open it. They decided to continue down the east-west corridor instead.

Passing by a barricaded tunnel on their left, they headed on into a vast, open chamber whose far (west) wall was entirely covered in a huge tile mosaic, mostly abstract color patterns but with a central portion depicting a golden lyre, very similar to the smaller rubbing Uncle Junkal had just found. The party searched the mosaic area for some time, and Vivuli was able to use his x-ray vision to see a recessed alcove behind it containing a glowing lyre. But there was no way to get at it; the dwarves were able to tell that any attempt to excavate through the mosaic-covered wall would result in the entire mosaic chamber collapsing.

Stymied, the group returned eastward. Innominus called upon Endra to detect evil, and detected malevolent energy behind the barricade blocking the south passageway, and also behind the secret door in the "giant stone humanoid" chamber.  Somebody (Innominus? Vivuli from a scroll?) cast dispel magic onto the secret door at the back of the prone stone guy chamber; it opened. Vivuli then sent a rat down the tunnel beyond.

The rat saw some stone statues of dwarves along the 85-foot long passage, then, approaching the cavern at its terminus, espied three robed women. Women with hissers for hair.

Viv saw what the rat saw, and so he lashed a fire gem onto an arrow, took careful aim, and shot the powerful demonic weapon down the corridor into the medusas' chamber. The fire gem exploded on impact, engulfing the cavern in white-hot flame, killing all three medusas instantly. The party went in after the flames died down, found a secret door to an alcove at the back, and looted the treasure they found there, including:

After this bit of swift destruction, the party decided to excavate the barrier blocking the westward corridor. Forty minutes into the excavation, some deadly stone giants came bounding through the remainder of the wood-and-rubble barricade, violent combat ensued, the party killed them, and the session ended. 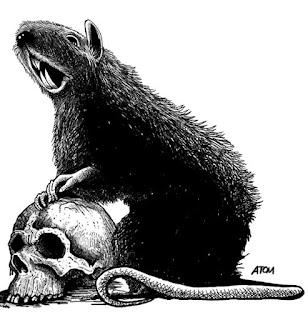 What in the rat?!