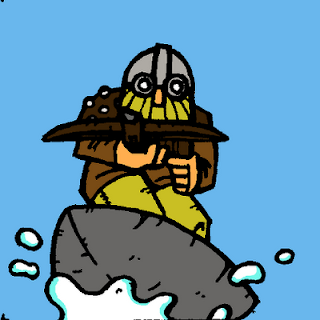 I got some great comments on my recent post about possibly investing in minis for Con / public game play. One of the ideas that got suggested was that rather than going for 3D minis at all, I could simply use card tokens (like that pictured above) on my new battle mat instead.

There do seem to be a number of advantages in going this route:

- At least in theory, one could prevail upon (or literally hire out) artists from the OSR blogosphere (Hi Kelvin!) to create custom tokens for specific monsters and PC types (e.g., rodians) one needs

Is this line of thinking blasphemy, as Christian suggests?

As a counterpoint, here is EGG on the subject of minis:

USE OF MINIATURE FIGURES WITH THE GAME

The special figures cast for ADVANCED DUNGEONS & DRAGONS add color to play and make refereeing far easier. Each player might be required to furnish painted figures representing his or her player character and all henchmen and/or hirelings included in the game session. Such distinctively painted figures enable you to immediately recognize each individual involved. Figures can be placed so as to show their order of march, i.e., which characters are in the lead, which are in the middle, and which are bringing up the rear. Furthermore, players are more readily able to visualize their array and plan actions while seeing the reason for your restrictions on their actions. Monster figures are likewise most helpful, as many things become instantly apparent when a party is arrayed and their monster opponent(s) placed. Furnishing such monsters is probably best undertaken as a joint effort, the whole group contributing towards the purchase of such figurines on a regular basis. Be very careful to purchase castings which are in scale! Out of scale monsters are virtually worthless in many cases. As a rule of thumb, HO scale is 25 mm = 1 actual inch = 6’ in scale height or length or breadth.

Figure bases are necessarily broad in order to assure that the figures will stand in the proper position and not constantly be falling over. Because of this, it is usually necessary to use a ground scale twice that of the actual scale for HO, and squares of about 1 actual inch per side are suggested. Each ground scale inch can then be used to equal 3% linear feet, so a 10’ wide scale corridor is 3 actual inches in width and shown as 3 separate squares. This allows depiction of the typical array of three figures abreast, and also enables easy handling of such figures when they are moved. While you may not find it convenient to actually use such figures and floor plans to handle routine dungeon movement, having sheets of squares for encounter area depiction will probably be quite helpful. If you do so, be certain to remember that ground scale differs from figure scale, and when dealing with length, two man-sized figures per square is quite possible, as the space is actually 6 scale feet with respect to length. This is meaningful when attacking a snake, dragon, etc. if characters are able to attack the creature’s body length. With respect to basically bipedal, erect opponents, scale will not be a factor.

Details of preparation and painting of miniature figures for the game are not germane to this work. Your hobby supplier will have an assortment of small brushes and paints for such purposes, and you may inquire there as to the best techniques of painting.