"I'm the Steve Buscemi of dwarves."
--Dak
This session, played Monday 8/29/2011, included PCs Hazel (Ftr 4 / MU 4), Innominus (Clr 6), Yor (Dwf 5), Dak (Dwf 5), and Vivuli (Assassin 5 / MU 2). Hazel, having spent the bulk of last session unseen, began this session invisible as well. Since Dak's player wasn't here last session, we ruled that the dwarf had been out drunkenly tending the horses and War Wagon during last session's events, and stumbled in out of the snow just as this session got underway.

We picked up in the basement room where, having vanquished two gargoyle-demons, the party was now explaining to Grand Vizier Krock, Prince Arkus' chief aide, that he and the Prince had serious demon problems here at the country manor. As the following dialogue ensued, Hazel focused her powers of ESP upon the Grand Vizier.

Innominus of Endra (to Krock): You have demons setting up gates to infernal realms in your own cellar. How do you explain this?

Grand Vizier Krock: My staff and I never came down here -- nor did the Prince. We had heard from a member of the household staff who had served under the Baron that the cellar of the manor was haunted, and we felt it was best to leave such matters alone.

Hazel could tell that in his own mind, Vizier Krock believed the tale of a haunted basement and was genuinely terrified of the place. 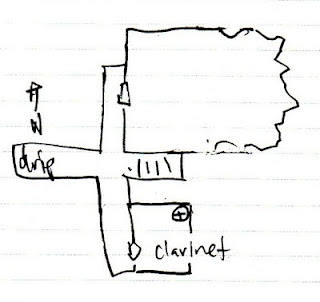 Moving out of the gargoyle-demon room and down the corridor to the south, to the door from behind which Hazel heard clarinet playing last session, Innominus used his Detect Magic spell to determine that there was a magical energy engulfing the (now silent) clarinet player's door. Using his x-ray vision ring, Vivuli quickly determined that beyond the door lay a roughly 20' x 20' chamber partially filled with smashed and randomly scattered furniture remnants, and a single humanoid-seeming creature lurking in the back corner (see circled "x" on map) behind a rubble pile. Using her ESP, Hazel determined that this creature's mind was utterly fixated on a being it referred to as "the Master." Its predominant thought was that it "had to get back to the Master," although Hazel detected that it both strongly desired and simultaneously dreaded reuniting with this Master.

Hazel then used her ventriloquism spell to speak sentences into the creature's ear, including, ultimately, "the Master commands you to open the door."

Responding to this, the creature ran to the inside of the still-closed door and swung it open from the inside. For a brief moment, the party could see a tall, pale human-looking figure framed in the doorway, a certain nobility still conveyed in its bearing despite the pallor of its skin and a black blankness in its eyesockets. But then instantly, triggered by magic, a huge burst of fire exploded in the doorway, burning the creature to a crisp a split-second after it flung the door open wide.

Grand Vizier Krock: My god, that was the Baron!

The clarinet-playing creature had indeed been Baron Kaminster but was now caught in some kind of hideous, semi-undead state. To be sure he/it did not rise again, Innominus and Dak plunged a stake through its heart and cut off its head, while Vivuli searched around in the 20' x 20' chamber, finding a necromantic talisman like those the party previously discovered in an Achelonian graveyard at the conclusion of Session 37.

Having made this set of discoveries, the party next investigated the central, westbound corridor of the cellar level. A steady dripping sound came from that passage, and probing down the hall, the party found that the drip sound actually came from beneath a circular wooden trapdoor at the end of its 30' length.

Dak and Innominus pried up the trapdoor, and the party found itself looking down into an incredibly deep 6' diameter vertical shaft. Very dark. All the party's ropes were amassed, tied together, and lowered down the shaft -- at the 350' mark they had run out of rope but not touched bottom. Always a dwarf of action, Dak dropped an oil flask down the shaft and, gauging the timing of the impact and using his dwarven sense of underground architecture, estimated that the bottom must be at least 500' down. Upon its distant impact upon a solid surface far below, Hazel swore she faintly heard some low-frequency utterances (possibly grunts or growls) in response to the exploding flask's momentary flame burst.

More ropes were ordered brought to the basement from the Baron's stash, and soon the party was lowering itself, Dak-first, into the 500' shaft. Thanks to some words of encouragement (and shared snorts of dwarven whiskey) from the aforementioned Dak, three of Arkus' Royal Guards descended the shaft as well: Brad, Norbert, and Whiskey Pete.

At the bottom, the shaft opened into a great, circular domed chamber, roughly 60' in diameter, with two exits, one on either side. As soon as point-dwarf Dak lowered himself into the chamber, two hideous, birdlike demons half-leaped, half-flew at him, striking viciously with their vile claws. Fast, lethal combat ensued -- in the course of it, at least three PCs used their d30 rolls for damage against these poor demons. At one key point early in the battle, Innominus -- he was the second one down the rope -- chucked his holy water bolas at one of the demons, rolled a "28" for damage, thereby paving the way for Vivuli to pick it off the next round with a similarly deadly longbow shot.

The second demon fled, flying with uncanny swiftness down the westbound corridor. Hazel ordered her kestrel familiar after it, and lo and behold, the dang kestrel could actually outfly my demon! So it caught up within one round, intent upon dropping the elven vine net (looted in Session 33 upon my poor airborne demon who was just minding his own business and wasn't really bothering anybody when those pesky PCs came along.

Nevertheless, the demon almost escaped all but the kestrel's clutches when a portion of the tunnel roof collapsed behind it, filling up all but a small 3' aperture between itself and the rest of the (landborne) party in the natural corridor. But Dak charged ahead anyway, and his fellows joined in, shooting projectiles through the aperture at the fleeing demon -- to no avail. But then Hazel, deciding to act decisively despite the deed's negation of her invisibility, fired her longbow at the demon, rolling a natural "19" for the hit, and a d30 damage roll of "28" plus bonuses for the one-shot kill. The thing exploded in a fiery blast in midair, its disembodied, beaked head hurtling forward on its prior trajectory and clanging loudly against an iron barrier 120' further down the tunnel. The party dug its way past the rubble barrier and joined the kestrel in front of the huge iron door at the end of the passage.

Innominus cast detect magic, and was nearly blinded by the brightest arcane emanations he had ever seen when he looked at the formidable door. There were no apparent door handles, but the dwarves could tell that the huge door likely pushed inward, so they got together and with Yor's +1 crowbar pushed the heavy thing in. The sight that greeted them more or less temporarily blinded the still magic-detecting Innominus: an 8' diameter upright circular gate, just like the ones from the Stargate franchise, with nine different sections around the ring, five inscribed with one large symbol each, and four blank ones. A few feet in front of the upright gate was a small pedestal with a bowl fused to the top of it.

The five visible symbols included: a five-pointed star, a horned skull, a mountain, a circle, and a flame. The first four of these correlated to various types of Morag's keys the PCs had on them; presumably they had at last come upon one of Morag's Gates. Indeed, the bowl atop the small pedestal looked about the right size to receive one of the bone chits.

Hazel cast Read Languages upon the gate's symbols, to no avail.

Somehow the party decided to try the Gate out, choosing the "mountain" chit to insert into the pedestal-bowl. Dak tried to hold onto the chit without dropping in fully in, but once in the area of the bowl, the chit simply vaporized in his hand, and the gate activated. The whole circle rotated until the mountain symbol was at the top, then the gate within the circle winked to life.

Hazel sent the kestrel in, and through the kestrel's eyes she saw a vast, yet likely built or constructed, stone chamber, literally thousands of feet to a side. It was so vast and dark that it could not all be seen at once, the kestrel had to find a wall and fly the perimeter. Dak, Yor and Innominus prowled around in there for the better part of an hour, yet never reached a single wall. Dak etched his family rune into the stone floor before he left.

The party retreated back through Morag's Gate and waited on the Minochian side; it winked closed after two hours. The session ended.