S for Sloth of Death

During my recent revisit of the unfinished Crimson Blades of Ara Referee section, I became reacquainted with the "Sloth of Death," a favorite monster of my 1990s gaming group. Actually, I don't recall that the group actually encountered many Tree Wildens in the course of their adventures, but they sure as hell talked about them a lot. So the "Sloth of Death" became something of a legendary creature in those early CBoA sessions, at least by player word of mouth.

And here it is, statted for Labyrinth Lord: 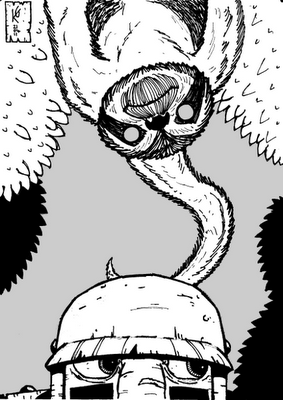 The Tree Wilden, popularly known as the "Sloth of Death," is a 3 foot tall tree-dwelling primate with an incredibly strong, 3-4 foot long prehensile tail. The Wilden’s greenish skin and brownish fur make it very difficult to spot; it waits silently in trees for unsuspecting prey to pass by below. Once a victim is in range, the Wilden lowers its powerful tail and attempts to strangulate. A successful tail strangulation attack does 1d3 initial damage and indicates that the victim is now held fast; s/he takes 1d3 strangulation damage per round until s/he breaks free. Furthermore, for each round of strangulation after the first, there is a cumulative 1 in 6 chance that the victim passes out.

Breaking free from the tree wilden's stranglehold requires a successful force doors roll -- STR bonuses apply. Furthermore, any round in which the strangling sloth itself takes combat damage (or is affected by a spell) grants the victim an additional +1 to his/her force doors escape roll.

The Tree Wilden can also attack with its claws, but rarely does so, preferring its strangling tail attack to direct melee. It often hunts by twilight or night and has 30' infravision. It is a tree dweller who prefers warmer climes, and is most often encountered in Southern Achelon, Blint, and Noffel.