G for The Grinding Gear 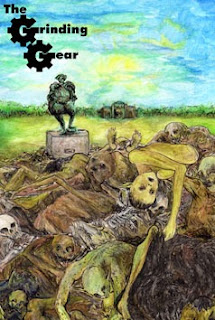 As a self-proclaimed big fan of Gary Gygax's classic Tomb of Horrors module, it stands to reason that I would find a lot to rave about in James Edward Raggi's masterpiece The Grinding Gear.

Yes, you read that right: I call this module a "masterpiece," in large part because it illustrates a facet of Raggi's module-writing talents that goes somewhat under-deployed in all his other works: ingenious dungeon design.  And by "dungeon" I mean the actual physical layout of the dungeon, NOT the overall adventure concept, which Raggi always delivers with great inventiveness and panache.

Just as Gygax's Tomb did so much with so little -- i.e., became the single most notorious "deathtrap" dungeon of all time in a mere 33 keyed locations on a single level -- Raggi's Grinding Gear takes an extremely simple, almost overly contrived premise -- that a bitter inventor / innkeeper creates a tomb for himself that is also a devious "deathtrap"-style test of adventurers' abilities -- and makes it sing.  The Grinding Gear is a perfect vehicle for the trap-inventing, blackly humorous Raggi that, as I said before, often takes second chair to the uncanny, weird-mood-evoking, horrific-apocalypse-creating Raggi we see at work in, for example, his most famous and celebrated module, Death Frost Doom.

Without sidetracking too far here, let me state that I am by no means complaining about the horror-evoking Raggi.  In some ways, unnerving horror is what Raggi does best, and it is difficult to imagine anyone else coming up with the death cult shrine of Death Frost Doom, the melancholy locale outlined in Hammers of the God, or the queer town of Pembrooktonshire.  But my point is that of the works just mentioned, both DFD and the first two Parts of No Dignity In Death are geared much more toward evoking a feeling of dread and testing player's wits than they are about "traditional" dungeoneering activities.  And while the last section of No Dignity and all of Hammers of the God are arguably more "classic-dungeon-y" than DFD or Pembrooktonshire, they are nevertheless tinged with strong elements of haunted pasts, uncanny occurrences, and creeping horror, all of which characterize the "usual" Raggi style.

Not so The Grinding Gear.  The horror is gone, replaced with a capricious, black-comic wickedness.  And back to the dungeon layout: without giving too much away, suffice to say that GG's is the most complex map yet published in a Raggi module (possibly excepting the recent LotFPWFRPG modules, which I have not seen).  Admittedly, to use Melan's old-school dungeon layout terminology, GG is a Type B "Linear with Sidetracks" dungeon, as virtually all of Raggi's modules are.  But the "sidetracks" in a module like this are the whole point.  Whereas I loved the tone of DFD, and must point out that it is the one Raggi module to feature a Type D "Circular Routes" layout, it nevertheless feels somewhat linear or uni-directional in the sense that the "crux" of the module lies in one key location, and while there are two ways to get there, that one location is still the focus or fulcrum of the adventure -- not much "happens" anywhere else.  In The Grinding Gear, the map's linearity is a strength; it forms an escalating series of dungeoneering challenges that perfectly articulates the logic of the module, just as a similar linearity does in Tomb of Horrors.  The whole point of The Grinding Gear -- expressed in no uncertain terms to its visitors -- is to reach the final resting place of the dungeon's creator, and in such a goal-oriented place I would expect a certain uni-directionality of design.

All this mention of Gygax's Tomb of Horrors forces me to clarify: except in the most superficial way, The Grinding Gear is NOT some cheap copy or toned-down reiteration of the Tomb premise.  No, it is more than that.  It is nothing less than a high-stakes test of the party's dungeoneering / exploration skills.  One could make a similar argument for Acererak's tomb, yet that place has an added level of random (?) sadism: certain traps (like the green devil face) and situations (like fighting the demi-lich) make Module S1 all but impossible to defeat.  Of course, that extreme lethality became part of Tomb's appeal over time, but The Grinding Gear's great triumph (and thus its utility) is that it is not impossible, but merely intensely challenging, to "beat."  While a few of the traps will depend upon a very high degree of PC observation skill and exploration ability to successfully bypass, there is nothing in Gear that makes me say, "Wow!  If the PCs go in there, they are fucked no matter what."  It is my strong suspicion -- as yet untested in actual game play -- that The Grinding Gear is survivable by a reasonably well-equipped party who makes a strong commitment to proceeding carefully and thoughtfully, paying close attention to even mundane-seeming details.  In short, The Grinding Gear is NOT a deathtrap, although it can easily become one for the ill-prepared or the rash.

As James Maliszewski has commented, this module may be of some use to DM's who simply want to pilfer trap ideas from it.  Yet I am inclined to suggest that the real strength of The Grinding Gear is in its holistic construction, the way its parts interact to create a satisfying whole.  There is a nice balance here between premise and playability, a balance that even the great Death Frost Doom (which may possess a bit more strength of premise than thrill of playability) does not quite achieve in my view.  In line with this, while some traps could easily be cherry picked from The Grinding Gear for use elsewhere, certain others would require substantial reworking because their "solution" is intrinsically linked to features of the location as Raggi presents it.  In short, while I am sure certain elements of the module could be useful in a modular sense, I think The Grinding Gear's real value -- the reason I consider it to be at least the equal of Death Frost Doom in terms of overall brilliance -- is its organic unity, i.e., how I suspect it would run in play exactly as written.

If the module has a weakness, it is that it would be no fun for a "hack-and-slash" style party to play through.  But then again, what Raggi module would be?  Raggi always has the thinking player in mind, and The Grinding Gear may be his best and most fun challenge yet for that kind of player and party.  There is no sense of creeping terror here, no undead apocalypses or murder mysteries; yet puzzling conundrums, exploration-based tests of skill, and black humor abound, all of which combine to make this one of the most accessible and coherent Raggi modules to date.  I cannot wait to run it with the right group of players -- I wonder if my current group is up to taking on the devious mind of Garvin Richrom?

Creativity and inspiration-value: 5 out of 5, especially if you have been looking for a Tomb of Horrors style challenge geared (ha, ha) to lower-level players.
Use-value to DM's: 4 out of 5, if party is up to the challenge of running the module as is or possibly if you want to "borrow" some good trap ideas.
Playability:  Not yet tested, but hopes are high!