Q for Queen of the Demonweb Pits 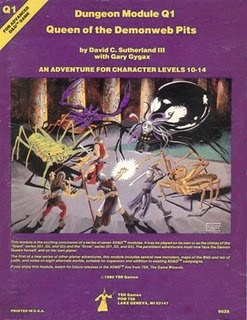 Module Q1 Queen of the Demonweb Pits marks the conclusion of an epic series of classic D&D modules that begins with the G1-2-3 series Against the Giants and continues with the D1-2-3 Descent / Kuo-Toa / Vault of the Drow adventures. Q1 is typically thought to be somewhat inferior to its six predecessors, yet I find that for me, it has sparked a great deal of inspiration over the years. I would even say that it is my third-favorite module in that whole linked series, after D2 Shrine of the Kuo-Toa and D3 Vault of the Drow.

I would urge my readers to check out James Maliszewski's retrospective on Demonweb, wherein he accurately notes that Module Q1 is historically "the first official example of planar adventuring for Dungeons & Dragons" and that "the design of the Demonweb itself is extraordinarily clever." Both of these factors make this module stand out in my mind even though I have literally never run it or played it. As I have suggested before, when it comes to other planes of existence, Q1 is the most influential D&D publication I've ever read; its version of planar adventuring is the one that has stuck with me, defining how I see other planes working in the D&D game in general. Rather than putting forth a bunch of strange abstractions and diagrams (as in the Dungeon Master's Guide), Module Q1 shows us how extraplanar adventures can really work. And, appropriately to its subject matter, it is weird as hell.

Like James M., I like the weirdness and grandeur of the Demonweb, especially its Escherian overpasses and underpasses and its numerous portals to "other" Prime Material Planes. I remember first looking at that Demonweb map as a kid and thinking "what the hell IS this thing??" It just doesn't look a thing like any other module map I know of. The one part of the Q1 map package that does look anything like a typical D&D dungeon map turns out to be deck plans for a steam-powered Spider Ship -- wacked!!

Of course, many D&D gamers have expressed dissatisfaction with Q1, especially in comparison to the awesome G- and D-series modules that precede it.  I myself admit that it would take very special circumstances and a very special party for me to actually want to run Demonweb.  But it is an essential part of my D&D module collection, and one I turn to for inspiration and ideas more than practically any other.