OSRCon last weekend was the first gaming con I've attended, and I was surprised at how intense of an experience it was. This might have been turned up a notch by a lot of driving from central PA to Toronto, being part of the Ken St. Andre envoy, and the exotic setting in the frozen wastes of Canada, but the reality is that gaming draws upon energies that other activities do not. It is a rarefied social interaction. So I was pretty punchy the whole time.

I had a good time. I played Tunnels and Trolls for the first time under the TrollLordship of Ken St.Andre himself, which started off Friday morning with a fairly in-depth explanation of the rules -- but also the logic and rationale behind those rules, often critiquing short-comings of That Other Game -- to a group of 8 to 10 players. There were some digressions there, but I was happy to hear Ken's exegesis. Then we all spend about 2 hours TRYING TO GET INTO THE FIRST ROOM OF THE DUNGEON. Seriously. All these seasoned gamers and folks are falling off a bridge, drowning, saving the drowning, not saving the drowning, flying into the ceiling, breaking ankles, cutting hands up, looking for sticks, splitting the party, getting it back together .... It was fun, but Ken St. Andre is a clever guy that lets the party kill itself, as he said several times over the weekend.

Later I played LL that Carter was running. He may elaborate on that. I will note that it was by that time I noticed that of the ~8 players, I was surprised to find about half to be in their 20s or so. That wasn't representative of the attendees overall, but there was a strong (local) contingent of people born well after Moldvay/Cook or Mentzer Basic were popular. And they were cool folks to play with and talk to, as well, lots of enthusiasm.

Saturday I got to play in a LL Barrowmaze session run by its author, Greg Gillespie. He is a very cool guy, a stern but fair DM. I was intrigued by the turning mechanics for clerics in Barrowmaze, as well as the great art by Stefan Poag, Jim Holloway, and an "Irish guy". I will buy this thing now. The play itself was ... well, I'll be honest: it was some of the stupidest play I've been involved in for a long time, but I was as much a part of that stupid play as anyone. I walk up to the altar. "A trap door opens in front of the altar. You fall into the pit. It's bottomless. You can play this NPC now." After that it was variations on "Make as much noise as possible in the dungeon", shouting for lost retainers, hammering iron spikes into everything, chiseling away at the cursed obelisk ... fucking DUMB, my friends. But that's how we were doing it and it was a good time. Lots of death.

That afternoon I was weary, after getting lunch with Greg and his compatriot (Mr. Gillespie is not fond of spicy food and we ended up at a really great Pho place; he took it in stride), I was really exhausted. After the panel discussion I wondered if I'd actually play in the Call of Cthulhu game I was signed up for. In the event, I decided to go for it, and announced to the Keeper, Blain, that I had never played the game before and don't know the rules at all. "That's probably better, actually," he said, and the other players nodded. We played a scenario that is apparently Ghost Light, from this Terrors from Beyond collection, about a mysteriously abandoned Scottish lighthouse. Lawrence Whitaker and another player conducted most of the play in dubious Scottish accents (which I couldn't muster for myself) and there was a lot of good play, plenty of joking but not to the point of derailing the tension and pace of the game. I don't have other Keepers to compare Mr. Blain to, but he had the game so well organized and narrated the events in such keen fashion -- and though he referred to his screen occasionally for some mechanical bits, it never intruded on the play. A very fluid style that indicates he really knows the game inside and out and really loves to run it. So I had fun. I went temporarily insane for a period, but managed not to get turned into a pile of goo by a weird being. Not bad for a newbie.

The next day before we drove Ken back to the airport on our way out of town we stopped in at the modernist Robarts Library at UT, where I was trying to identify places that Cronenberg shot parts of his student films Stereo and Crimes of the Future, and allegedly inspired some elements of the library in The Name of the Rose. More on that another time 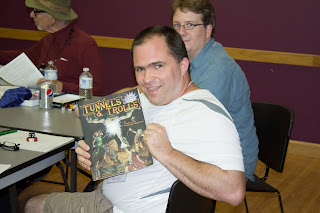 Me posing with my T&T 5.5 rulebook, with its author in the background left.

I returned from OSRCon 2012 on Sunday evening but have been too ecstatic to gather my thoughts about it; I've just been riding the high of meeting Ken St. Andre, hanging out with a bunch of awesome fellow old-school gamers, and playing a ton of old-school games including Labyrinth Lord and Tunnels and Trolls. In fact, I am still so awash in the glory of it all (and embroiled in a few other time-intensive projects this week to boot) that this will not constitute a comprehensive report on the Con. I just wanted to post a few photos and mention a couple highlights, with more detailed reports to follow by the weekend or early next week. So many tales to tell! 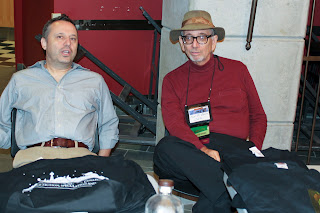 First, a shout out to Chris Cunnington, event organizer, who did a simply fabulous job of bringing everybody together, making sure we had what we needed (including lots of water) and ensuring that OSRCon ran smoothly. It did; mission accomplished, Chris! THANKS!! 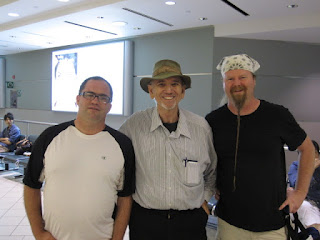 Me, the Trollgod, and Spawn of Endra at the airport Thursday night. (This photo courtesy Chris Cunnington.)

FYI, Chris also has some great OSRCon photos (from Day One and Day Two) posted over at his blog, including this one (pictured above) of me, Spawn, and trollgod Ken St. Andre looking punchy and quasi-exhausted yet quite chuffed at Toronto Pearson Airport terminal 3. 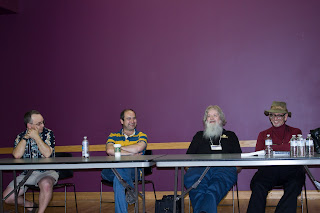 I ran two parties through my home-brewed LL adventure, Keep of the Zombie Master, which was a huge success that I can hardly wait to tell you about. When I wasn't running those games, I was playing T&T with the Trollgod himself, or attending this year's panel, which I think was even more entertaining and informative than last year's.

Lots more to come; but thanks to Ken, Chris, Spawn, and all the other lovely gamers who made the weekend so special and exciting for me. I can't wait to do it again next year; OSRCon III here we come!! 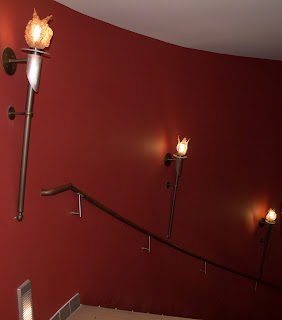 I've been away from the blog of late, working hard on a non-gaming-related writing project that I have only just finished (yesterday). Now, the next big event that will keep me away from the blogosphere -- but into some serious, hard-core, old-school gaming -- is OSRCon 2012, taking place this Friday and Saturday in Toronto, Canada!

Spawn and I are driving up to the Con tomorrow afternoon, and will be sure to take some pictures while we're there. Hell, internet access permitting, maybe we'll post a couple reports for our loyal readership from the Con itself. But be sure to look for some post-Con reportage here next week, and maybe, just maybe, things will pick up steam around here again in the fall. 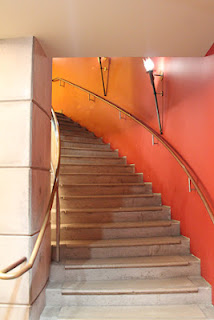 On Friday morning we will descend this staircase, headed for ADVENTURE!