I've been watching a fair amount of King of the Hill lately and caught this amusing reference in a season four episode: 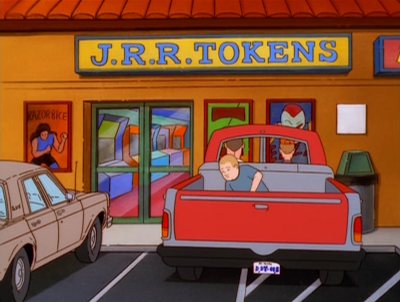 Stumbling through an old issue of The American Statistician today I saw a nice (if dry) little article, "Quantitative Graphics in Statistics: A Brief History", by James R. Beniger and Dorothy L. Robyn (1978; Vol 32, pp. 1-11). In it they mention the first known commercial production of graph paper (p. 3):

The rise of coordinate plotting is also documented in the commercial development of graph paper. Rectangular grid paper was first offered for sale by a Dr. Buxton in London in 1794. Buxton's product first appeared in published research six years later, in an article on barometric variations which included a footnote advertising the product [Howard*, p. 357]. Herschel made ingenious use of plotted data to calculate the elements of the elliptical orbits of double stars, and his 1832 paper on the subject included a ringing endorsement of graph paper: "Such charts may be obtained, neatly engraved; and are so very useful for a great variety of purposes, that every person engaged in astronomical computations, or indeed, in physico-mathematical inquiries of any description, will find his account in keeping a stock of them always at hand" [Herschel**, pp. 171-2].

D&D would seem to fall under the rubric of a "physico-mathematical inquiry of any description".

The Tower of Frikkin' Death

Now that 2013 has arrived, Spawn of Endra and I have been talking about our next publishing project, the adventure module The Tower of Death.

As I mentioned late last summer, the module is completely drafted, clocking in at just under 20 pages at present. It is my hope to keep it about that page count, or maybe even to trim some fat out of the prose on the next (hopefully final) revision pass. The Tower of Death has also been playtested, both by some of my "home" (Skype) group players as well as two different groups at OSRCon 2011 (see report here). Now the project merely awaits a final revision pass (my job), artwork (ideally, a cover by Johnathan and Daisey Bingham and interior art by Kelvin Green), cartography (by Spawn of Endra), and layout (also by Spawn).

In other words, not much has changed since my last lengthy update about the project, we're just now finally entering the final phases. The aim is to release the module at a reasonable price point in both pdf and POD formats by the end of 2013.